The Selamlık (Sultan’s procession to the mosque) at the Hamidiye Camii (mosque) on Friday, possibly by Abdullah Frères, 1880–93, albumen, in album: Yıldız and Topkapı palaces, tombs and Selamlık procession, Istanbul, Ottoman Empire (Library of Congress)

The sultan who would not be photographed

In the late nineteenth century, he collected tens of thousands of images and commissioned fifty-one volumes of photographic albums containing images of the Ottoman Empire to be sent abroad to the United States and the United Kingdom. Yet the Sultan famously refused to have his own photograph taken after he ascended the throne. Why didn’t he want people to see his image? Did he have something to gain from restricting the viewer’s gaze? When newspapers and journals wanted to publish a story about the sultan, they had to make do with one of only three photos taken before the young Abdülhamid took the throne in 1876. One of these photos was taken in 1869 by the commercial firm known as the Abdullah Frères, a group of three Ottoman-Armenian brothers who got started in the business as photographic re-touchers. In the image, the young prince stands before the camera, staring directly back at the viewer. His right hand rests on the edge of a marble tabletop and his left hand is relaxed at his side. He wears a fez and a frockcoat, which is unbuttoned and slightly open to reveal a vest and pocket watch. Through his pose and outfit, the prince presents himself as a cosmopolitan, modern gentleman. This photo is an example of one way in which the Ottoman elite in the nineteenth century used the new technology of photography to represent themselves.

Photography and the Power of Image

Photographic technology was introduced to the Ottoman Empire soon after the discovery of commercially viable forms in 1839. It was quickly adopted alongside other image-making practices, such as drawing, that were used to acquire military intelligence, document the empire’s history, and manage its populace. Commercial photo studios began popping up in the empire’s capital city of Istanbul starting in the early 1850s. As a medium, photography gained a reputation for being a supposed instrument of science and truth, ideas that had gained importance during the seventeenth and eighteenth centuries. However, even very early photographers developed means to manipulate photographic “truths.” Early photo manipulation could be imprecise, and it was difficult for practitioners to approximate the kinds of idealization that had become established in painted ruler portraiture.

Although Abdülhamid was not interested in having his own portrait taken after he had ascended the throne, he was fascinated with photography’s ability to represent and catalog information. He said, “Every picture is an idea—a picture can inspire political and emotional meanings which cannot be conveyed by an article of a hundred pages; therefore, I benefit greatly from photographic rather than written records.” The sultan worked with his advisors to commission six different photographic firms, including the Abdullah Frères, to work together to prepare a series of photographic albums that could show the world the recent modernization projects taking place within the Ottoman Empire. It was important to show the empire in a positive light because it was experiencing territorial and political instability during this period. View of the Bosporus and the Rumeli Hisarı (fortress), Abdullah Frères, 1880–93, albumen (Library of Congress)

The kinds of images included in the albums were Ottoman landscapes—including famous views of the Bosporus shores of Istanbul—and historical monuments—including ancient and Byzantine sites. Scenes of educational, industrial, and military reform and modernization featured prominently. The encyclopedic thrust of these albums can be seen in other photographic survey projects of the time and in trends such as world’s fairs. Following the 1893 World’s Columbian Exposition in Chicago, the albums were sent as diplomatic gifts to the U.S. in 1893 and the U.K. in 1894. Today, you can view them online as individual photographs in the digitized collections of the Library of Congress.

Picturing the Sultan and His Predecessors

Because the Ottoman sultans practiced Islam, some people believe that Abdülhamid forbid his photo to be taken solely because of a religious objection. His reasons were probably more complex. The Qur’an does not explicitly ban images, but some Muslim cultural traditions avoid depicting figures of animate beings, especially in sacred contexts. he public perception of Abdülhamid’s orthodox Sunni Islamic piety had political importance for his dual roles as sultan and caliph. As sultan-caliph, Abdülhamid claimed legitimacy as the autocratic political and spiritual leader of the worldwide Muslim community. The immense power of this role made Abdülhamid a target for assassination, including an infamous failed attempt planned to take place during a selamlık ceremony in 1905. It is feasible that the sultan’s ban on his own image stemmed from fears over security concerns, a desire to drum up political support among conservatives, or a genuine religious belief, but it is more likely to have been some combination of all three. 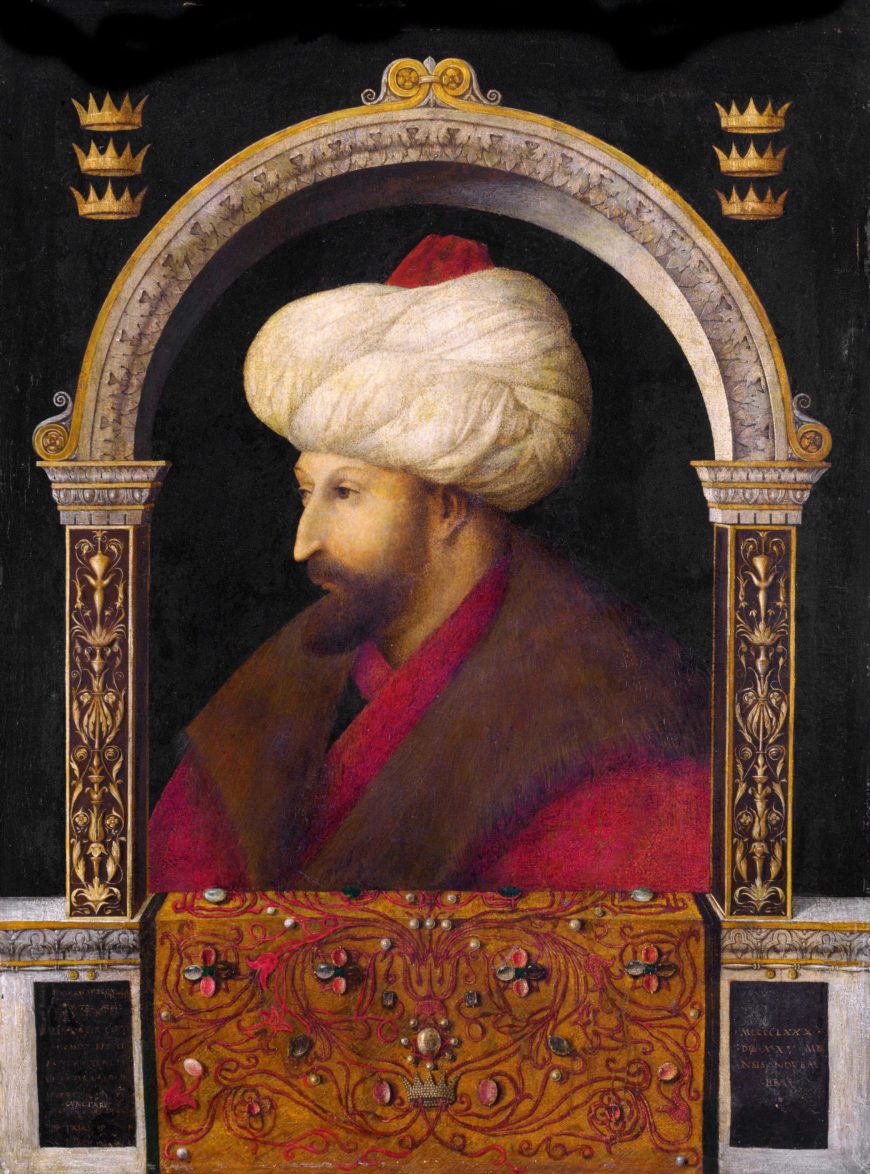 Many of Abdülhamid’s Ottoman dynastic predecessors did not share the same reluctance to have their image made. Naturalistic images of Ottoman sultans had been produced since at least the fifteenth century, when Sultan Mehmed II—also known as Mehmed the Conqueror, or Fātiḥ—famously commissioned his portrait from the Venetian painter Gentile Bellini. During the five hundred years between the reigns of Mehmed and Abdülhamid, the genre of sultanic portraiture underwent dynamic shifts in style and format, though viewership was usually restricted to the highest echelons of the Ottoman court in Istanbul. This restricted viewership changed during the late eighteenth and into the early nineteenth centuries, when reformist sultans such as Selim III and Mahmud II enthusiastically disseminated their own images through the public display of large-scale oil paintings and the sending of diplomatic gifts such as printed portraits. Around this time, technological improvements in printmaking processes and a burgeoning middle class paved the way for the rise of popular print and photographic culture in Istanbul. Mahmud’s sons, Abdülmecid and Abdülaziz, both continued the practice of commissioning painted and printed portraits of themselves. In the 1860s, Abdülaziz had his photograph taken by the Abdullah Frères, whom he declared the “Court photographers to his Majesty the Sultan and the Imperial Palace.” While images of Abdülaziz and his sultanic predecessors were primarily created for use in official palace and diplomatic contexts, they were also reproduced for a popular audience who purchased them on the commercial market.

When Abdülhamid came to the throne in 1876, he initially renewed the Abdullah Frères title. In 1880, however, the photographers found themselves in hot water for “daring” to print the sultan’s image without permission. The palace even demanded that copies of the sultan’s photo be collected! Cover of Le Petit Journal, with copy of Downey portrait of Sultan Abdülhamid II (as a prince), 1869

Although Abdülhamid’s image was restricted within the empire, it continued to circulate outside of the empire in the form of reprints of earlier portraits, including the Abdullah Frères photo discussed above. Another example is a photo taken by the firm W. & D. Downey from the time that the young prince visited London in 1867. In this portrait, Abdülhamid is seated in a chair, wearing a heavily embroidered military uniform and fez. He is posed with the accoutrement of a modern leader—the kid gloves representing civil diplomatic discourse as well as the sword representing martial strength. The French magazine Le Petit Journal reprinted this image on the cover of their February 21, 1897 issue, even though it was 30 years out of date by this time. While foreign publications continued to reprint Abdülhamid’s image abroad, strict censorship laws attempted to limit the importation of such material into the Ottoman Empire.

Though the Sultan chose not to allow photographic images of himself to be distributed, he did approve of the representation of the Ottoman Empire through pictures of its historical monuments, territory, and people. The Abdülhamid Albums show us a small, selective slice of what culture, customs, institutions, and technologies were important to the empire at the time Abdülhamid was on the throne. Reciprocal album exchanges with other leaders show us that many of the same subjects were of interest to a larger, cross-cultural network of viewers. Abdülhamid’s engagement with such diplomatic exchanges and collection of vast amounts of images highlight the contradiction of a sultan who loved photos but refused to be photographed himself.

Erin Hyde Nolan, “The Gift of the Abdülhamid II Albums: The Consequences of Photographic Circulation,” Circulation 9, no. 2 (Spring 2019).