A conversation between Dr. Salaam al-Kuntar and Dr. Steven Zucker about the ancient city of Palmyra while looking at six Palmyrene funerary reliefs , c. 150-200 C.E., varying dimensions, limestone (The Metropolitan Museum of Art). An ARCHES video. Built around an oasis in the Syrian desert, Tadmur or Palmyra, “city of palms,” was one of the most important trade and cultural centers of the ancient world. Palmyra had a distinctive local culture that was incorporated into the Roman Empire in the first century C.E. More than two centuries later, the city gained independence from Rome and under its famous Queen Zenobia established the Palmyrene empire which annexed much of the eastern part of the  Roman Empire. Palmyra stands at the crossroads of civilizations—along the silk routes where merchants traveled between Europe and Asia.

The art and architecture of the city is a perfect portrait of the fertile crescent with its amazing blend of cultures and traditions. A dynamic culture and a land of inherent pluralism owing to its Mesopotamian, Levantine, Semitic, Greco- Roman, Persian, and Islamic heritage.

Palmyra was inscribed as a UNESCO World Heritage Site in 1980 and has a particular place in the Syrian historic consciousness. Syrians take pride in the once-great merchant city that influenced and ultimately defied the power of Rome.

Palmyra’s grand colonnade (above) is a 1,100m long Roman period street that connects a temple to the god Bel with the area known as the Camp of Diocletian. Other archaeological remains in the ancient city of Palmyra include an agora, theatre (below), urban quarters, and other temples that comprise what is generally considered by scholars to be the finest example of surviving Roman architecture in the Eastern Mediterranean. 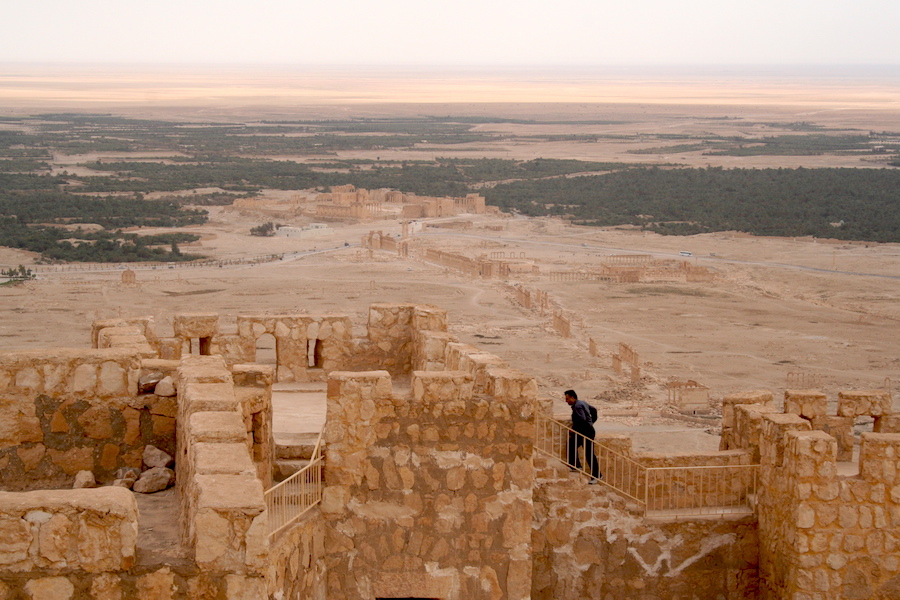 The Fakhr-al-Din al-Ma’ani Castle with a view of Palmyra, photo: Wurzelgnohm (public domain)

Also within the archaeological zone of Palmyra stands the Fakhr-al-Din al-Ma’ani Castle. This heavy fortification dates to the 13th century and offers a spectacular view of the site.

The affluent residents of ancient Palmyra built elaborate tombs outside the city walls, adorned with portraits of citizens. Bust sculptures of wealthy patrons from Palmyra, dating to the 1st and 2nd centuries C.E., demonstrate the complexity and richness of Palmyrene identity. These busts combine Roman sculptural elements and local stylistic elements. Some of these portraits were accompanied by inscriptions in the Palmyrene dialect of Aramaic. 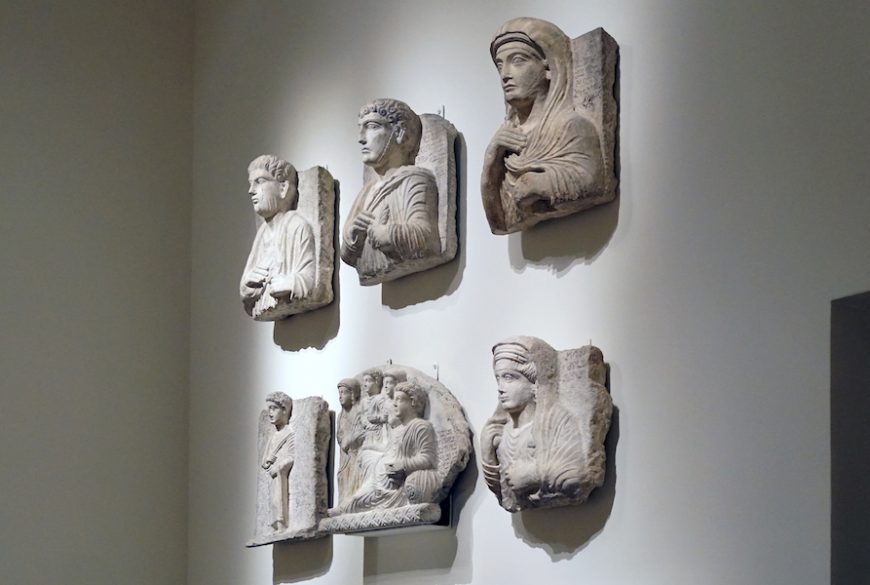 Both the modern town and ancient city of Palmyra were caught in the crossfire of the Syrian civil war beginning in early 2013. Then in 2014, military forces from the regime of Bashar al-Assad (president of Syria) fortified the site, further damaging the ruins.

In 2015, ISIS overran Palmyra, and committed barbaric and monstrous assaults on the people, cultural monuments, and artifacts of the city. The destruction of Palmyra’s magnificent monuments provoked an international outcry and prompted media attention. Khaled Asaad, archaeologist and former Director of Antiquities in Palmyra

ISIS began by executing Khaled Al-Ass’ad, the former Director of Antiquities at Palmyra, a devoted and outstanding archeologist who loved Palmyra like no one else. Following this horrific execution, ISIS began to destroy many of the most famous ruins—the Bel and Baalshamin temples, the tower tombs, the monumental arch and standing columns in addition to plundering the Palmyra Museum and destroying a large number of sculptures and artifacts left there. Looting and propoganda in Palmyra

The ancient site also witnessed extensive looting and many Palmyrene artifacts appeared on the antiquities market or were captured by Lebanese and Turkish customs officials. Looting started in the fall of 2011, when the Assad regime lost control of the town. Then, during the ISIS occupation, the so-called Diwan al Rikaz office was established which gave digging permits in exchange for paying a tax. The permit was for non-figurative objects only (presumably objects with human figures were to be destroyed by ISIS fighters). However, the looters are believed to have handed over only unsellable figurative objects to the Diwan al Rikaz, hiding from ISIS artifacts in good condition that could be sold to dealers.

Throughout these episodes where control shifted between the forces of the Assad regime and ISIS, Palmyra, its monuments, and artifacts were used to reinforce the appalling political propaganda being disseminated. In late 2015, ISIS used the ancient theater to stage dramatic executions for circulation on social media. Soon after, the Russian military staged a musical concert at the same theater to promote an image of a civilized Russian savior, only to leave ISIS to capture the city nine months later with little fighting. Syrian cultural heritage, including that of Palmyra, should play a reconciling and unifying role in post-conflict Syria. Syrian cultural heritage should not be used in the political or sectarian agenda of the groups fighting in the Syrian conflict. 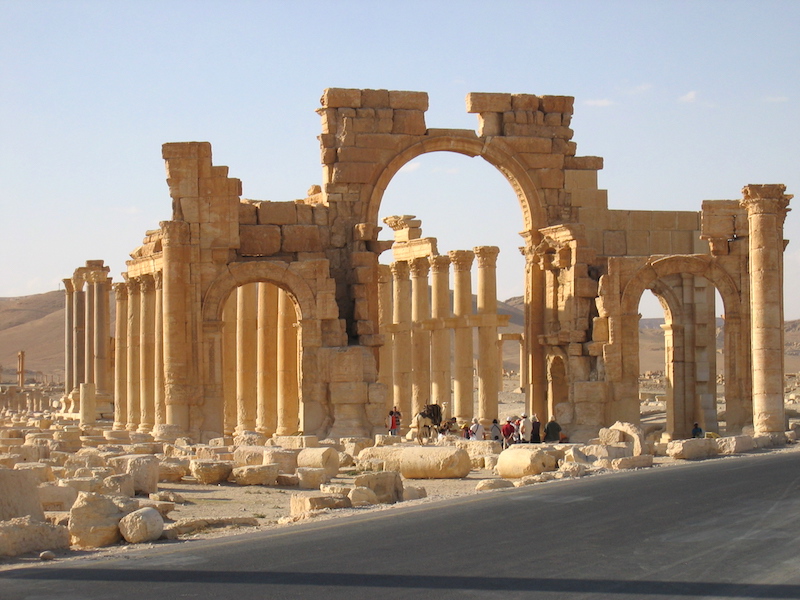 In May 2016, when ISIS was first driven from Palmyra, there were numerous calls, led by UNESCO, to begin the work of restoring the ancient city despite the fragile security conditions. Millions of Syrians are still suffering from the consequences of the bloody war. Among them are the people of Palmyra, who continue to experience grave risks, including detention by the Assad government, and the destruction of their homes and heritage.

When the day for the reconstruction of Palmyra comes—after the conflict is over—it will require a period of reflection about what should be reconstructed, how it should be rebuilt, and how the recent events of the war and occupation by ISIS should be memorialized—if at all. This discussion must be undertaken by Syrians on all sides of the conflict, and not decided for Syria by international organizations. Model of the trimphal arch at Palmyra (built to 1/3 scale), created by the Institute for Digital Archaeology, Oxford University (photo © Stephen Richards, CC-BY-SA 2.0)

The question of 3D models

A new development in the documentation of heritage sites has been the application of new technologies to create 3D online libraries of the world’s important cultural heritage sites and a number of projects have recently worked to create a 3D models of Palmyra’s lost monuments. The Institute for Digital Archaeology at the University of Oxford has created a 3D model of the destroyed triumphal arch using structure-from-motion photogrammetry.

The 3-D printed arch was displayed in London, New York, and other cities, prompting a debate about the purpose of such reconstructions and their display—especially given that the reproduction failed to capture the authenticity of the original structure and that the project revealed a disconnection with the Syrian people and the inhabitants of Palmyra, who have lived alongside these monuments for many generations.

The site of Palmyra on UNESCO’s World Heritage List

“Looted in Syria – and sold in London: the British antiques shops dealing in artefacts smuggled by Isis,” The Guardian (July 3, 2015).

About the Silk Road (from UNESCO)

Institute for Digital Archaeology, Oxford University and the Triumphal Arch at Palmyra