The Provençal city of Arles in the south of France, is home to the medieval church, Saint Trophime. 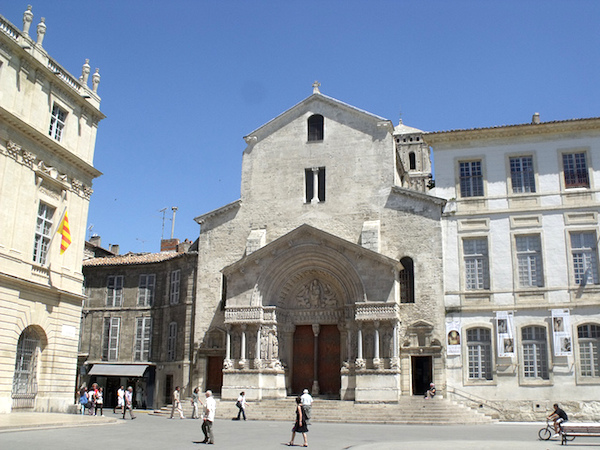 When I first saw the church, somewhat inconspicuously wedged between two more recent structures, it struck me as rather non-descript. However, that impression only lasted a moment. 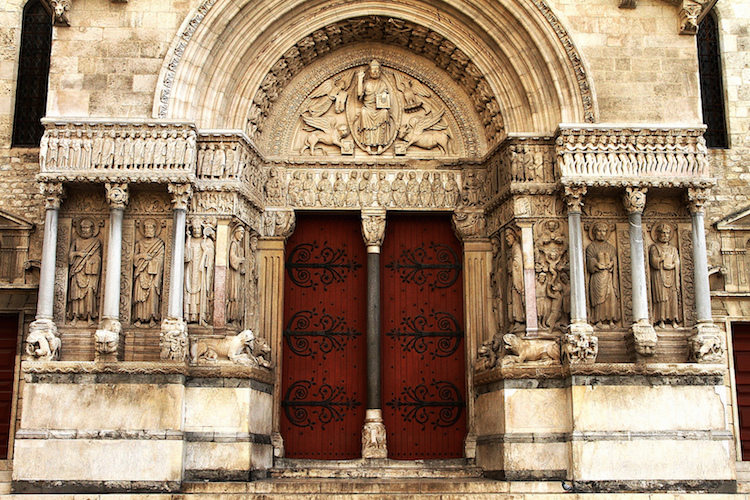 As I drew nearer, the magnificence of the portal, embellished with an elaborate sculptural program, came into view. Hapless souls, chained and bound, shuffle along to their ultimate doom while Christ in Majesty, surrounded by symbols of his apostles, looks stoically on (the sculptures on the facade depict, in part, the Last Judgment). This is perhaps the finest example of a Romanesque portal to be found in southern France. 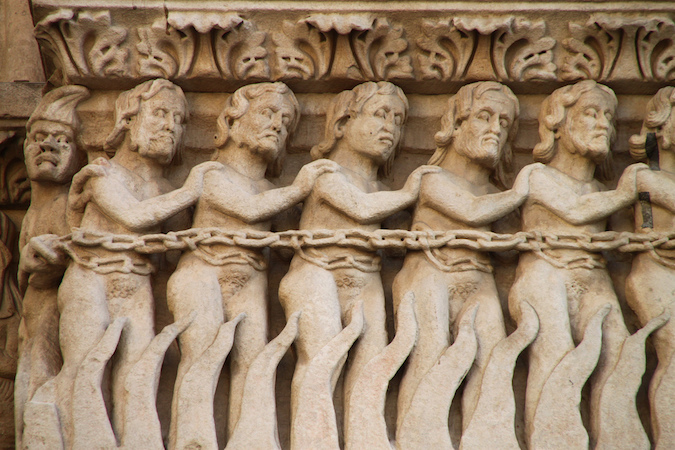 Damned on right side of the portal, Saint Trophime (photo: kristobalite, CC BY-NC-ND 2.0)

The exterior of Saint Trophime was cleaned in recent years—for better or for worse. While it is a pleasure to see the sculpture without a thick black film of pollution, some think these sorts of restorations do more harm than good. The entrance to the cathedral consists of a single arched opening reminiscent of ancient triumphal arches. There are a number of triumphal arches that still stand not far from Arles, in nearby Saint Remy and Orange.

The entirety of the main portal projects outward and it is on this portion of the exterior that the bulk of the church’s sculpture can be found. 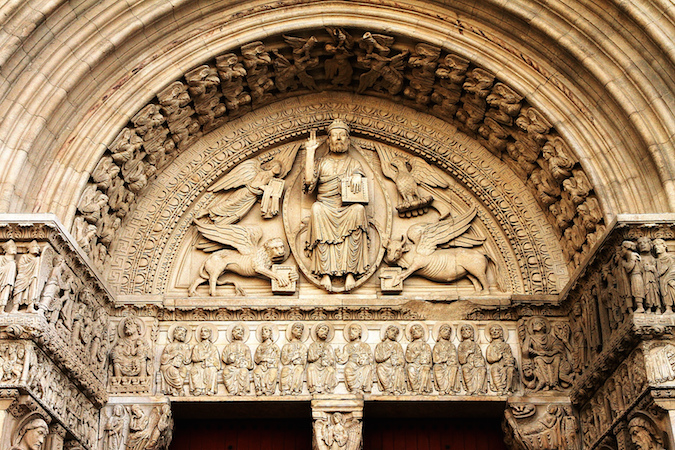 Known as the church of Saint Stephen in early Christian times, the church was renamed Saint Trophime when the relics of Saint Trophimus (the first bishop of Arles), in this case a variety of bones, were dug up and reinterred at the church site in 972. Typical for medieval churches, Saint Trophime was constructed over a long period of time and built in a series of campaigns. The structure that is seen today was started in the eleventh century and completed in the twelfth, with a few bits from earlier and later periods thrown in.

The church of Saint Trophime was the first stop on the Via Tolosa, one of the main pilgrimage routes through France leading to Santiago de Compostela in Spain. The church was also the episcopal seat, or home to the bishop’s chair, from the early fifth century until the early nineteenth century, giving this structure cathedral status.

Saint Trophime is Romanesque in style, as opposed to Gothic, and one way this can be seen is in the tell tale rounded arch of the front portal. Gothic structures tended to favor a tall pointed arch. Likewise, a heavy barrel vault covers the nave, as opposed to a pointed rib vault (which became a hallmark of Gothic architecture). It should be noted that the barrel vault at Saint Trophime is slightly pointed, perhaps hinting at the Gothic age to come.

The interior, though not as decorative as the facade, is just as impressive. When visitors enter Saint Trophime, they are greeted by a high nave (the long central hall). In fact, standing 20 meters/65 feet high, this is the tallest nave in Provence and is equivalent to a six story building. 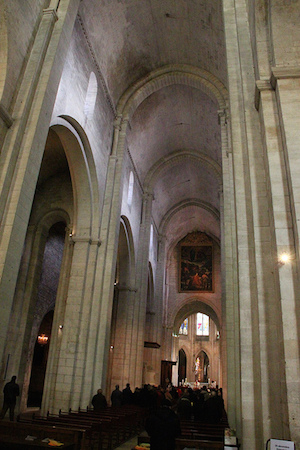 The nave is flanked by tall, narrow side aisles, which are covered by half-barrel vaults. Side aisles are fairly unusual in medieval Provençal churches, the tendency being toward single nave buildings. Because Saint Trophime was a cathedral at the time of its construction, it may have warrented a more complex and expansive design (at least in comparison to nearby parish churches).

The nave of Saint Trophime is composed of five bays and communicates with the side aisles via arcades that are slightly pointed like the main barrel vault. The elevation is a straightforward two-story design, consisting of an arcade and a clerestory (the upper portion of the wall pierced by windows).

Despite this, Saint Trophime is still rather dark, perhaps due its large size. The nave and aisles are crossed by a transept, which creates the plan’s cruciform shape. There is a crossing tower above the intersection of the nave and trancept supported on squinches (support that help transition from the rectangular form of the bay up to the octagonal form of the tower), a common feature of Provençal churches. 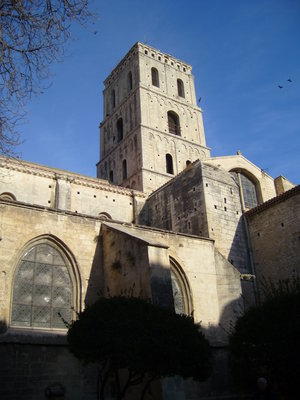 This tower reaches a stately height of roughly 42 meters or 137 feet! The east end terminates in three semi-circular apses. The central apse and ambulatory was rebuilt in the fifteenth century, and therefore reflects a Gothic sensibility in its use of pointed arches and rib vaults. The remainder of the church is a true Romanesque gem.

Provence, along with many other regions, developed its own unique Romanesque style. Saint Trophime is a wonderful representation of some of the facets of this Provençal regional style. For example, it is built of finely dressed ashlar masonry, meaning it uses precisely cut stones and little or no mortar. Given the number of stones needed to create this building, this was no small feat! There would have been no speedy stone saws, only a mason’s trusty chisel and mallet.  Despite the time and labor involved, this was a common building practice in the area.

Many of these stones are emblazoned with prominent markings, often resembling letters of the alphabet. These are called mason’s marks and were also common to local masonic practice. Mason’s marks were used for a variety of purposes, including payment and placement of the stones. 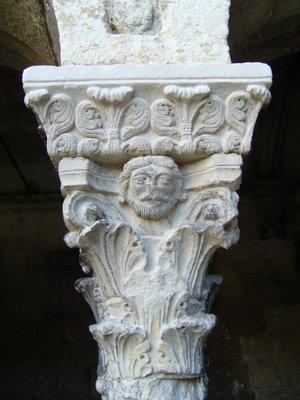 Of special note are the classically inspired Corinthian columns (fluted columns surmounted by a scroll and acanthus leaf capital) that can be found just below the springing of the main nave vault. There is also a stringcourse molding running the length of the nave just above the clerestory carved in an acanthus leaf pattern. Both the Corinthian column and the acanthus leaf molding were favorites of the ancient Romans.Arles abounds with Roman ruins, including an arena, a theater and the remains of a bath complex. It is easy to see how local medieval builders may have been inspired by the Roman remains they would have seen daily.

The portal tympanum (illustrated above) displays Christ in Majesty surrounded by the four apostles represented in symbolic form: John (eagle), Matthew (angel), Luke (ox), and Mark (lion). This is also known as the tetramorph. Those chosen for heaven, including bishops and priests, sit at Christ’s right. At Christ’s left stands an angel brandishing a sword, effectively blocking the damned from paradise. The condemned souls, with hellfire licking at their legs, seem to be taking their damnation in stride (above). The carving, exquisite though it may be, does not convey the same strong emotions present in some contemporaneous churches such as at Moissac. 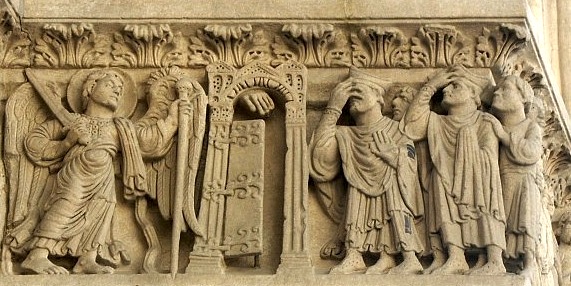 The Last Judgment and Second Coming are common subjects for Romanesque portals, particularly for those churches along the pilgrimage routes. The Saint Trophime version is notable in its overall stoicism despite the drama of the subject matter. 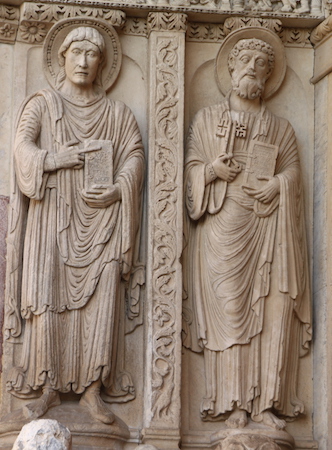 The portal is jam-packed with sculpture. There are a number of other biblical scenes included in addition to the Last Judgment, particularly from the early life of Christ. For example, if one looks at the lintel just to the right of the doorway, the Adoration of the Magi can be seen. Below those registers a host of saints, including Peter, John, Paul, Stephen and Trophime himself, glare into the middle distance, giving the viewer the sense that they too have been judged and been found wanting! The grand entranceway’s symmetrical organization into clear registers gives it an orderly and uniform appearance, everlasting hellfire not withstanding.

Saint Trophime was designated as a UNESCO World Heritage site in 1981 because of its status as a prime example of Romanesque architecture in France, and its importance as the starting point of one of the millennium-old pilgrimage routes to Santiago de Compostela in Spain. The World Monuments Fund (WMF) has been a key supporter of ongoing efforts to preserve and restore the building.

After sponsoring the restoration of the building’s facade in the 1990s, the WMF began the project of documenting and restoring the cloister in 2009. Their efforts involved the application of new technologies—in particular, 3-D laser scanning and high-definition photography by the non-profit organization CyArk and the engineering firm Christofori and Partners. The resulting documentation of the building was used to consult with many international experts who contributed valuable knowledge to the restoration, and it also preserved the building in digital form, making the information available for users around the globe. The WMF then oversaw the cleaning and restoration of the interior stone work, sculptures, terracing, and columns, including a type of laser-cleaning that carefully removes layers of accumulated soiling on the delicate marble.

This project demonstrates not only the importance of continued maintenance for important monuments, but the benefits of digital documentation for both expert planning and research as well as for the wider public. The open accessibility of the 3-D models and photographs online through CyArk is a cutting-edge example of how cultural heritage, and its continued importance for everyone, can be emphasized and shared around the world.

What is a tympanum?

Glossary of Medieval Art and Architecture