An impressive city of 125,000–200,000 inhabitants, by the 6th century, Teotihuacan was the first large metropolis in the Americas. Teotihuacan, as the city is called, is a Nahuatl name that means “the place where the gods were created” and was given by the Mexica (sometimes called Aztec) centuries after it was abandoned in the 7th century. The Aztecs attributed names and significance to its buildings but had no contact with this earlier culture. Very little is known of the people who built Teotihuacan, and as a result, much of our knowledge of the site, its art, and Teotihuacan culture is derived from Aztec sources. Largely created before 250 C.E., Teotihuacan is a testament to the ambition of its people, who built the first American city on a grid plan. Pyramid of the Moon seen from the Avenue of the Dead with Cerro Gordo in the distance, Teotihuacan, Mexico (photo: Steven Zucker, CC BY-NC-SA 2.0)

Due to an absence of (or as of yet undiscovered) royal palaces and graves, the lack of evidence for a cult of personality, and the as-of-yet undeciphered hieroglyphs, the governing system of Teotihuacan remains largely elusive to scholars. Nevertheless, the dramatic monumental architecture and dense urban fabric reveal a complex environment carefully planned to support a large population but also structured by the surrounding natural environment and in relation to specific constellations and planetary events. In keeping with the stratified nature of other Mesoamerican societies, Teotihuacan also benefitted from rulers, or a ruling elite, who commissioned massive architectural landmarks such as the Pyramids of the Sun and Moon, and who spread Teotihuacan’s sphere of influence throughout Mesoamerica—even into the Maya region as far away as Guatemala. The city of Teotihuacan is aligned, like other Mesoamerican cities such as La Venta, on a north-south axis. This alignment is made explicit by the central artery, known as the Avenue of the Dead, which extends more than 1.5 miles across the city. Entering the city from the south, the Avenue of the Dead leads visitors to the city’s three main architectural monuments, the Ciudadela, a sunken plaza at the southernmost tip that contains temples, including the Pyramid of the Feathered Serpent, the Pyramid of the Sun further down the avenue, and the Pyramid of the Moon located at the northernmost point. In the distance and behind the Pyramid of the Moon, visitors can also catch a glimpse of the impressive Cerro Gordo, an extinct volcano that frames the pyramid and demonstrates the harmonious relationship between architecture and natural topography. Running perpendicular to the Avenue of the Dead, another street follows the San Juan River. These axes help to define the grid of intersecting horizontal and vertical corridors that structure and organize the city plan. The urban grid helped to establish order for religious, domestic, and commercial complexes and a structural coherence that supported the management of the city and its population. Thousands of apartment complexes also reflect the ordered planning of the site. Pyramid of the Sun and the Avenue of the Dead, Teotihuacan, Mexico (photo: Steven Zucker, CC BY-NC-SA 2.0)

The Pyramid of the Sun, which reaches a height of over 200 feet, was the tallest structure in the Americas at the time. Built over a cave, it is unclear who or what the pyramid was built to commemorate, although art historians have suggested that creation mythology may be at issue, since Aztec and Maya sources refer to caves as places of origin and fertility. The pyramid was meant to be viewed and approached from the East. Visitors can still climb the pyramid’s steep staircase, which originates near the Avenue of the Dead and rises over five levels to what is now a bare flattened top. Keep in mind that this pyramid was heavily reconstructed in the modern era, so its original shape may have appeared somewhat differently than it does today. The Pyramid of the Feathered Serpent occupies a prominent place in the Ciudadela, a large open space that offers a respite from the massive presence of the Pyramid of the Sun and Pyramid of the Moon. Like so much else at Teotihuacan, the Pyramid of the Feathered Serpent was built in the talud-tablero style. The temple stands out for its sculptural ornamentation depicting the feathered serpent, known by its Aztec name Quetzalcoatl. The feathered serpent is associated with water imagery and is depicted numerous times on the exterior of the temple as an undulating snake navigating among seashells. Two faces project outwards, one of which depicts the feathered serpent. The identification of the other head is more challenging. One interpretation is that it represents an early version of the Aztec god Tlaloc (known for his goggled eyes) and is associated with rain and warfare. However, some scholars identify the head as an early precedent of Xiuhcoatl, or Fire Serpent, who was associated with warfare, fire, and time (or the calendar). Most scholars agree that the temple was associated with warfare and human sacrifice, as confirmed by numerous skeletal remains (presumably of warriors) that were discovered by archeologists in the 1980s. Speculation has also arisen about whether the Pyramid of the Feathered Serpent may have contained the body of a ruler. Agustín Villagra, reconstruction of mural from Tepantitla in Teotihuacan in the National Museum of Anthropology in Mexico City (photo: Steven Zucker, CC BY-NC-SA 2.0)

Teotihuacan was a heavily painted site, with murals found throughout the city. For example, on the walls of the apartment complex in the Tepantitla district, we find an elaborate mural showing a figure often identified as the Great Goddess and, more recently, as a mountain-tree. The female figure stands frontally while a blossoming tree with butterflies and spiders emerges from her head (potentially a reference to the heavenly realm), while her feet remain attached to the underworld. The inverted u-shape found below the mountain-tree may function as a symbolic womb, similar to the cave found at the Pyramid of the Sun.

The identity of the two individuals to her side, possibly priests, have sparked interest. Considering the cosmopolitan nature of the city, it had been thought that Teotihuacan’s figurative art was not portraiture, but rather generic representations that sought to unify a diverse population. Recently, however, some painted signs have been recognized as representing the names of individuals, leading to a re-examination of whether Teotihuacan artists portrayed specific individuals and reminding us that there is still much to learn about this complex and ancient city.

Archeologists have dated the city’s collapse to the seventh century, when many of Teotihuacan’s buildings were destroyed.

The Teotihuacan Ciudadela on The Metropolitan Museum of Art’s Heilbrunn Timeline of Art History. 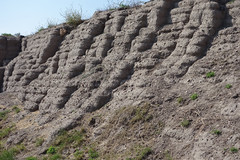 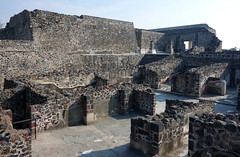 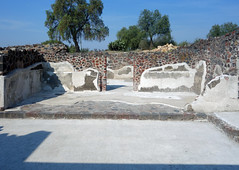 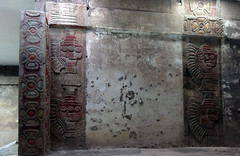 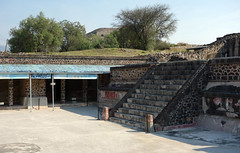 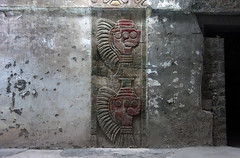 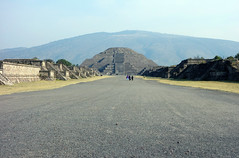 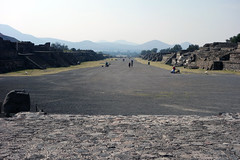 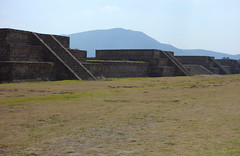 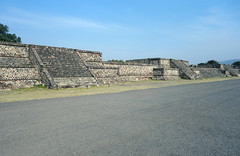 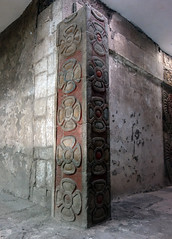 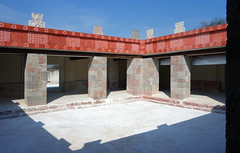