If Jacques-Louis David is the most perfect example of French Neoclassicism, and his most accomplished pupil Jean-Auguste-Dominique Ingres, represents a transitional figure between Neoclassicism and Romanticism, then Eugène Delacroix stands (with, perhaps, Theodore Gericault) as the most representative painter of French romanticism. 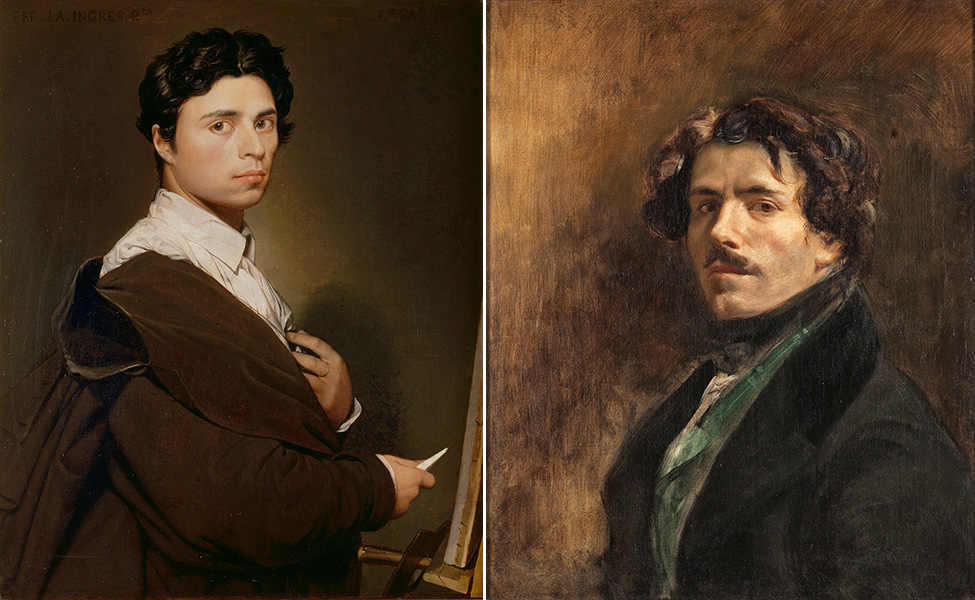 French artists in early nineteenth century could be broadly placed into one of two different camps. The Neoclassically trained Ingres led the first group, a collection of artists called the Poussinists (named after the French baroque painter Nicolas Poussin). These artists relied on drawing and line for their compositions. The second group, the Rubenists (named in honor of the Flemish master Peter Paul Rubens), instead elevated color over line. By the time Delacroix was in his mid-20s—that is, by 1823—he was one of the leaders of the ascending French romantic movement. From an early age, Delacroix had received an exceptional education. He attended the Lycée Imperial in Paris, an institution noted for instruction in the Classics. While a student there, Delacroix was recognized for excellence in both drawing and Classics. In 1815—at the age of only 17—he began his formal art education in the studio of Pierre Guérin, a former winner of the prestigious Prix de Rome (Rome Prize) whose Parisian studio was considered a particular hotbed for romantic aesthetics. In fact, Theodore Gericault, who would soon become a romantic superstar with his Raft of the Medusa (1818-19), was still in Guérin’s studio when Delacroix arrived in 1815. The young artist’s innate skill and his teacher’s able instruction were an excellent match and prepared Delacroix for his formal admission to the Ecole des Beaux-Arts (the School of Fine Arts) in 1816.

Massacre at Chios: Ripped from the headlines 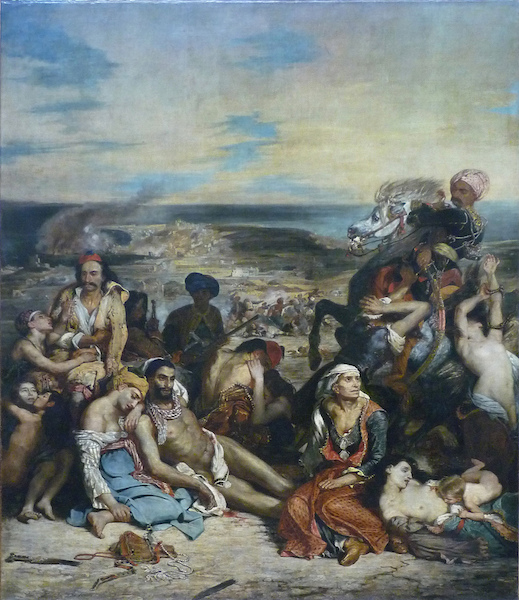 Less than a decade later, Delacroix’s career was clearly on the rise. In 1824, for example, Delacroix exhibited his monumental Massacres at Chios at the annual French Salon. This painting serves as an excellent example of what what Delacroix hoped romanticism could become. Rather than look to the examples of the classical past for a narrative, Delacroix instead looked to contemporary world events for his subject. This “ripped from the headlines” approach was common for many romantic painters. 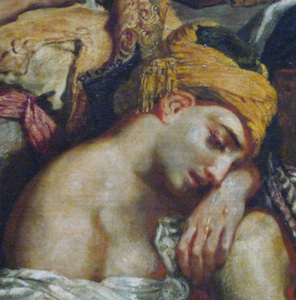 Comparing David’s Oath of the Horatii (above, left) with Francisco Goya’s The Third of May, 1808 (above, right) is instructive. Whereas David mined a story from more than 2,500 years ago, Goya instead completed a history painting from the recent past. This chronological immediacy only increased the pathos of Goya’s painting.

Delacroix has upped Goya’s ante in Scene of the massacre at Chios, however, by not only depicting Greek families awaiting death or slavery, but, by also chronicling a catastrophic event from the Greek War of Independence (from the Ottoman Empire) from a far-off location (the small island of Chios is located just off the coast of Turkey).  About the Greek War of Independence
When the monumental canvas the
Massacre at Chios is viewed from a short distance, it is clear that the artist placed more effort on his use of color, and employed a fluid open brushwork rather than relying on line and a carefully polished painting surface (as the Poussinists were doing). In sum, Massacres at Chios is an eloquent painting to explore when it comes to Delacroix’s commitment to romanticism. The subject was topical and exotic, and the artist used color and brushwork to elicit an emotional response from the viewer. Many of these same concepts can be seen in what many regard as Delacroix’s masterpiece, Liberty Leading the People (1830). Although Delacroix completed this painting during same year in which the event occurred, it is, at its core, a history painting. Indeed, Delacroix depicts an event from the July Revolution of 1830, an event that replaced the abdicated King Charles X (r. 1824-30)—a member of the Bourbon family and the younger brother of the guillotined King Louis XVI (r. 1774-1792)—with Louis Philippe I (r. 1830-48), the so-called Citizen King. This uprising of 1830 was the historical prelude to the June Rebellion of 1832, an event featured in Victor Hugo’s famous novel, Les Misérables (1862), and the musical (1980) and films that followed. Anyone familiar with Claude-Michel Schönberg and Alain Boublil’s musical can look at Delacroix’s Liberty Leading the People and hear the lyrics of the song that serves as a call to revolution:

Do you hear the people sing? Singing a song of angry men? It is the music of a people. Who will not be slaves again. Delacroix’s painting, Liberty Leading the People, at first seems to be overpowered by chaos, but on closer inspection, it is a composition filled with subtle order. The first thing a viewer may notice is the monumental—and nude to the waist—female figure. Her yellow dress has fallen from her shoulders, as she holds a bayonetted musket in her left hand and raises the tricolor—the French national flag—with her right. This red, white, and blue arrangement of the flag is mimicked by the attire worn by the man looking up at her. She powerfully strides forward and looks back over her right shoulder as if to ensure those who she leads are following. Her head is shown in profile—like a ruler on a classical coin—and she wears atop her head a Phrygian cap, a classical signifier of freedom. This is an important bit of costuming—in ancient Rome, freed slaves were given one to wear to indicate their newly liberated status, and this headwear became a symbol of freedom and liberty on both sides of the Atlantic Ocean during the eighteenth and nineteenth centuries.

Clearly, this figure is not meant to be a portrait of a specific individual, and Delacroix did not mean to suggest that there was a half-naked woman running around carrying a loaded firearm and a flag during the Trois Glorieuses—the Three Glorious Days as it came to be known—of the July Revolution. Instead, she serves as an allegory—in this instance, a pictorial device intended to reveal a moral or political idea—of Liberty. In this, she is similar to an example familiar to those in the United States, Frédéric Auguste Bartholdi’s Statue of Liberty (1886). Clearly, this monumental statue is not a portrait of a woman named Liberty who wears a Roman toga, carries a torch, and an inscribed tablet. Instead, she represents an idea. The same is true of Delacroix’s painted Liberty. 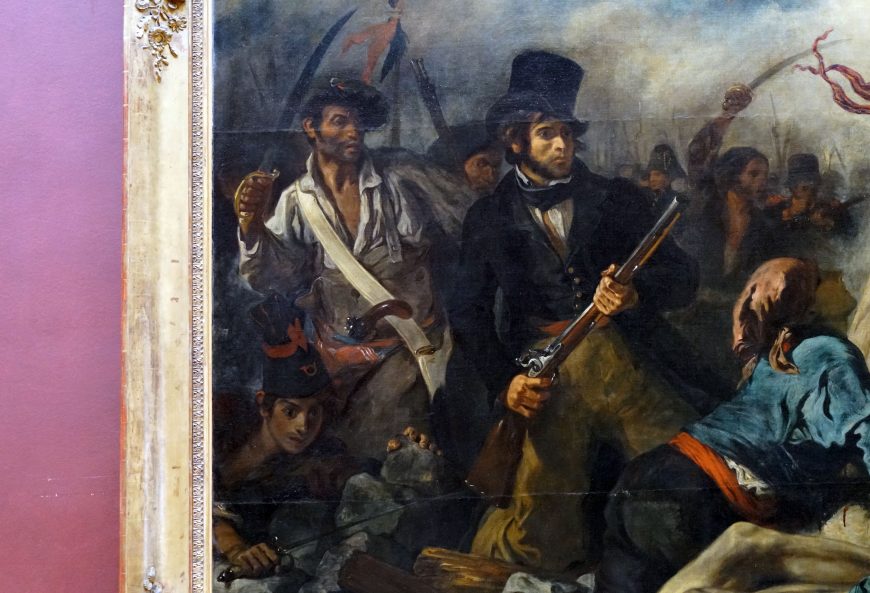 A revolution for everyone

But if the female figure represents an allegory, those who surround her represent different types of people. The man on the far left holds a briquet (an infantry saber commonly used during the Napoleonic Wars). His clothing—apron, working shirt, and sailor’s trousers—identify him as a factory worker, a person in the lower end of the economic ladder. His other attire identifies his revolutionary leanings. The handkerchief around his waist, that secures a pistol, has a pattern similar to that of the Cholet handkerchief, a symbol used by François Athannase de Charette de la Contrie, a Royalist solider who led an ill-fated uprising against the First Republic, the government established as a result of the French Revolution. The white cockade and red ribbon secured to his beret also identify his revolutionary sensibilities.

This factory worker provides a counterpoint to the younger man beside him who is clearly of a different economic status. He wears a black top hat, an open-collared white shirt and cravat, and an elegantly tailored black coat. Rather than hold a military weapon like his older brother-in-arms, he instead grasps a hunting shotgun. These two figures make clear that this revolution is not just for the economically downtrodden, but for those of affluence, too. 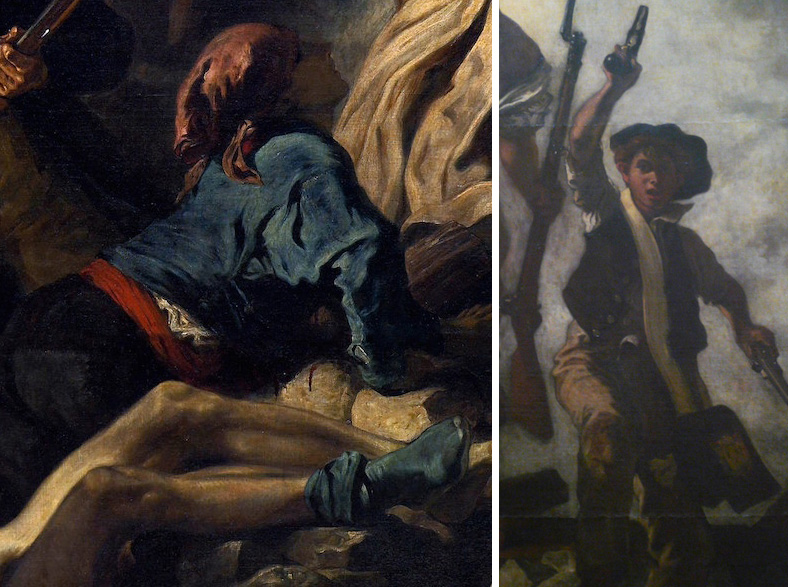 This revolution is not only for the adults—two young boys can be identified among the insurgents. On the left, a fallen adolescent who wears a light infantry bicorne and holds a short saber, struggles to regain his footing amongst the piled cobblestones that make up a barricade. The more famous of the pair, however, is on the right side of the painting (image, right). Often thought to be the visual inspiration for Hugo’s character of Gavroche in Les Misérables, this boy wildly wields two pistols. He wears a faluche—a black velvet beret common to students—and carries what appears to be a school or cartridge satchel (with a crest that may be embroidered) across his body. 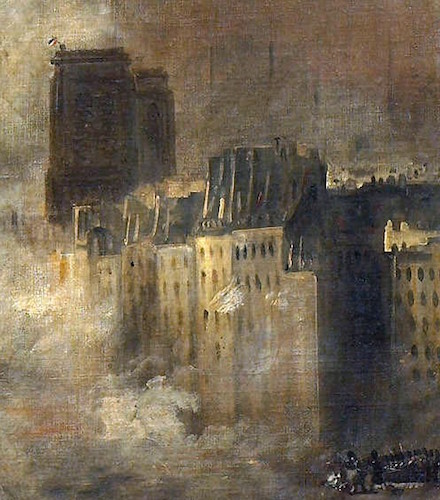 With no less than five guns and three blades among these six primary figures, it is not surprising that the ground is littered with the dead. Some are members of the military, note the uniform decorated with shoulder epaulettes on the figure in the lower right, while others are likely revolutionaries. In total, the painting accurately renders the fervor and chaos of urban conflict. And it is, of course, an urban conflict. Notre Dame, perhaps the defining architectural monument of Paris (at least until the Eiffel Tower arrived at the end of the nineteenth century) can be clearly seen on the right side of the painting. Importantly, Delacroix signed and dated his painting immediately underneath this monument.

Although not everyone can pick up a weapon and stand a post in a war, Delacroix would have us believe that everyone can be a revolutionary. When corresponding with his brother on 28 October 1830—less than three months after the July Revolution, Delacroix wrote, “I have undertaken a modern subject, a barricade, and although I may not have fought for my country, at least I shall have painted for her. It has restored my good spirits.” In doing so, Delacroix completed what has become both a defining image of French romanticism and one of the most enduring modern images of revolution. It has even been appropriated—although slightly altered—by the British rock band Coldplay as an album cover for their 2006 release Viva la Vida or Death and All His Friends.

Additional resources:
This painting at the Louvre
Yvonne Korshak, “The Liberty Cap as a Revolutionary Symbol in America and France,” Smithsonian Studies in American Art (Autumn 1987), pp. 52-69 (available online) 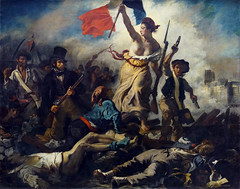