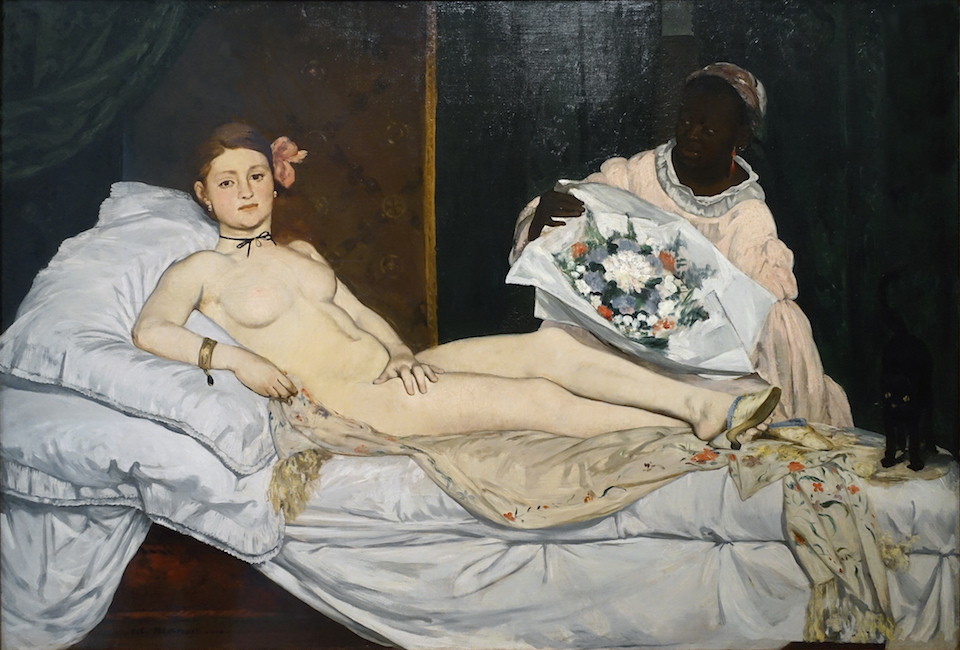 “They are raining insults upon me!”

Manet’s complaint to his friend Charles Baudelaire pointed to the overwhelming negative response his painting Olympia received from critics in 1865.  An art critic himself, Baudelaire had advocated for an art that could capture the “gait, glance, and gesture” of modern life, and, although Manet’s painting had perhaps done just that, its debut at the salon only served to bewilder and scandalize the Parisian public.

Mocking the classical past Olympia features a nude woman reclining upon a chaise lounge, with a small black cat at her feet (image above), and a black female servant behind her brandishing a bouquet of flowers (image below). It struck viewers—who flocked to see the painting—as a great insult to the academic tradition. And of course it was. One could say that the artist had thrown down a gauntlet. The subject was modern—maybe too modern, since it failed to properly elevate the woman’s nakedness to the lofty ideals of nudity found in art of antiquity. As the art historian Eunice Lipton described it, Manet had “robbed,” the art historical genre of nudes of “their mythic scaffolding…”[1] Nineteenth-century French salon painting (sometimes also called academic painting—the art advocated by the Royal Academy) was supposed to perpetually return to the classical past to retrieve and reinvent its forms and ideals, making them relevant for the present moment. In using a contemporary subject (and not Venus), Manet mocked that tradition and, moreover, dared to suggest that the classical past held no relevance for the modern industrial present. As if to underscore his rejection of the past, Manet used as his source a well-known painting in the collection of the Louvre—Venus of Urbino, a 1538 painting by the Venetian Renaissance artist Titian (image above)—and he then stripped it of meaning. To an eye trained in the classical style, Olympia was clearly no respectful homage to Titian’s masterpiece; the artist offered instead an impoverished copy. In place of the seamlessly contoured voluptuous figure of Venus, set within a richly atmospheric and imaginary world, Olympia was flatly painted, poorly contoured, lacked depth, and seemed to inhabit the seamy, contemporary world of Parisian prostitution.

Why, critics asked, was the figure so flat and washed out, the background so dark? Why had the artist abandoned the centuries-old practice of leading the eye towards an imagined vanishing point that would establish the fiction of a believable space for the figures to inhabit? For Manet’s artistic contemporaries, however, the loose, fluid brushwork and the seeming rapidity of execution were much more than a hoax. In one stroke, the artist had dissolved classical illusionism and re-invented painting as something that spoke to its own condition of being a painted representation.

The birth of modernist painting

It was for this reason Manet is often referred to as the father of Impressionism. The Impressionists, who formed as a group around 1871, took on the mantle of Manet’s rebel status (going so far as to arrange their own exhibitions instead of submitting to the Salon juries), and they pushed his expressive brushwork to the point where everything dissolved into the shimmering movement of light and formlessness. The 20th century art critic Clement Greenberg would later declare Manet’s paintings to be the first truly modernist works because of the “frankness with which they declared the flat surfaces on which they were painted.”[2]

Manet had an immediate predecessor in the Realist paintings of Gustave Courbet, who had himself scandalized the Salons during the 1840s and ‘50s with roughly worked images of the rural French countryside and its inhabitants. In rejecting a tightly controlled application of paint and seamless illusionism—what the Impressionists called the “licked surfaces” of the paintings of the French Academy—Manet also drew inspiration from Spanish artists Velasquez and Goya, as well as 17th century Dutch painters like Frans Hals, whose loosely executed portraits seem as equally frank about the medium as Manet’s some 200 years later. But Manet’s modernity is not just a function of how he painted, but also  what he painted. His paintings were pictures of modernity, of the often-marginalized figures that existed on the outskirts of bourgeois normalcy. Many viewers believed the woman at the center of Olympia to be an actual prostitute, coldly staring at them while receiving a gift of flowers from an assumed client, who hovers just out of sight (Manet here puns on the way French prostitutes often borrowed names of classical goddesses). The model for the painting was actually a salon painter in her own right, a certain Victorine Meurent, who appears again in Manet’s The Railway (1873) and Auguste Renoir’s Moulin de la Galette (1876).

Manet had created an artistic revolution: a contemporary subject depicted in a modern manner. It is hard from a present-day perspective to see what all the fuss was about. Nevertheless, the painting elicited much unease and it is important to remember—in the absence of the profusion of media imagery that exists today—that painting and sculpture in nineteenth-century France served to consolidate identity on both a national and individual level. And here is where the Olympia’s subversive role resides. Manet chose not to mollify anxiety about this new modern world of which Paris had become a symbol. For those anxious about class status (many had recently moved to Paris from the countryside), the naked woman in Olympia coldly stared back at the new urban bourgeoisie looking to art to solidify their own sense of identity. Aside from the reference to prostitution—itself a dangerous sign of the emerging margins in the modern city—the painting’s inclusion of a black woman tapped into the French colonialist mindset while providing a stark contrast for the whiteness of Olympia. The black woman also served as a powerful emblem of “primitive” sexuality, one of many fictions that aimed to justify colonial views of non-Western societies. If Manet rejected an established approach to painting that valued the timeless and eternal, Olympia served to further embody, for his scandalized viewers, a sense of the modern world as one brimming with uncertainty and newness. Olympia occupies a pivotal moment in art history. Situated on the threshold of the shift from the classical tradition to an industrialized modernity, it is a perfect metaphor of an irretrievably disappearing past and an as yet unknowable future. 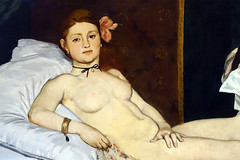 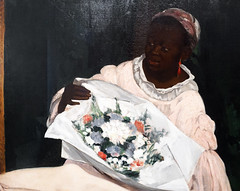 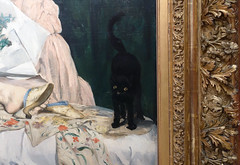 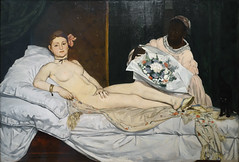 The painting at the Musée d’Orsay

T. J Clark, The Painter of Modern Life: Paris in the Art of Manet and His Followers (Princeton University Press, 1999, revised).