A temple with a lost name

Angkor Wat in Siem Reap, Cambodia is the largest religious monument in the world. Angkor Wat, translated from Khmer (the official language of Cambodia) literally means “City Temple.” As far as names go this is as generic as it gets. Angkor Wat was not the original name given to the temple when it was built in the twelfth century. We have little knowledge of how this temple was referred to during the time of its use, as there are no extant texts or inscriptions that mention the temple by name—this is quite incredible if we consider the fact that Angkor Wat is the greatest religious construction project in Southeast Asia.

A possible reason why the temple’s original name may have never been documented is that it was such an important and famous monument that there was no need to refer to it by its name. We have several references to the king who built the temple, King Suryavarman II (1113-1145/50 C.E.), and events that took place at the temple, but no mention of its name.

Angkor Wat is dedicated to the Hindu god Vishnu who is one of the three principal gods in the Hindu pantheon (Shiva and Brahma are the others). Among them he is known as the “Protector.” The major patron of Angkor Wat was King Suryavarman II, whose name translates as the “protector of the sun.” Many scholars believe that Angkor Wat was not only a temple dedicated to Vishnu but that it was also intended to serve as the king’s mausoleum in death. 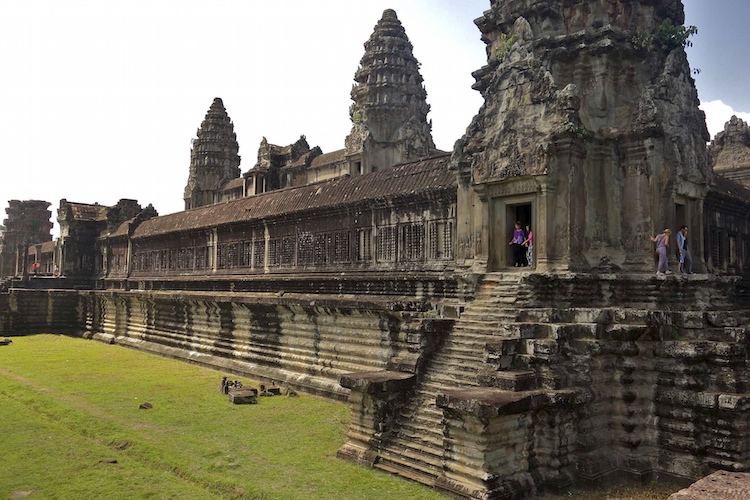 The construction of Angkor Wat likely began in the year 1116 C.E.—three years after King Suryavarman II came to the throne—with construction ending in 1150, shortly after the king’s death. Evidence for these dates comes in part from inscriptions, which are vague, but also from the architectural design and artistic style of the temple and its associated sculptures.

The building of temples by Khmer kings was a means of legitimizing their claim to political office and also to lay claim to the protection and powers of the gods. Hindu temples are not a place for religious congregation; instead; they are homes of the god. In order for a king to lay claim to his political office he had prove that the gods did not support his predecessors or his enemies. To this end, the king had to build the grandest temple/palace for the gods, one that proved to be more lavish than any previous temples. In doing so, the king could make visible his ability to harness the energy and resources to construct the temple, and assert that his temple was the only place that a god would consider residing in on earth.

The building of Angkor Wat is likely to have necessitated some 300,000 workers, which included architects, construction workers, masons, sculptors and the servants to feed these workers. Construction of the site took over 30 years and was never completely finished. The site is built entirely out of stone, which is incredible as close examination of the temple demonstrates that almost every surface is treated and carved with narrative or decorative details.

There are 1,200 square meters of carved bas reliefs at Angkor Wat, representing eight different Hindu stories. Perhaps the most important narrative represented at Angkor Wat is the Churning of the Ocean of Milk (below), which depicts a story about the beginning of time and the creation of the universe. It is also a story about the victory of good over evil. In the story, devas (gods) are fighting the asuras (demons) in order reclaim order and power for the gods who have lost it. In order to reclaim peace and order, the elixir of life (amrita) needs to be released from the earth; however, the only way for the elixir to be released is for the gods and demons to first work together. To this end, both sides are aware that once the amrita is released there will be a battle to attain it. 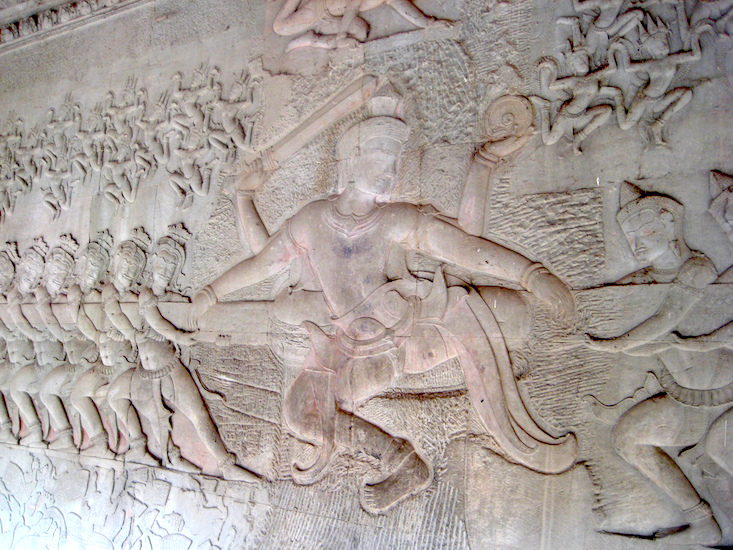 The relief depicts the moment when the two sides are churning the ocean of milk. In the detail above you can see that the gods and demons are playing a sort of tug-of-war with the Naga or serpent king as their divine rope. The Naga is being spun on Mt. Mandara represented by Vishnu (in the center). Several things happen while the churning of milk takes place. One event is that the foam from the churning produces apsaras or celestial maidens who are carved in relief throughout Angkor Wat (we see them here on either side of Vishnu, above the gods and demons). Once the elixir is released, Indra (the Vedic god who is considered the king of all the gods) is seen descending from heaven to catch it and save the world from the destruction of the demons. 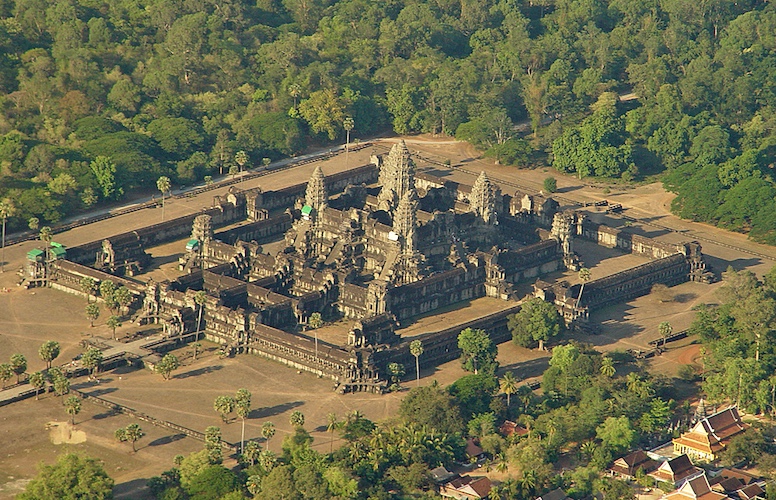 An aerial view of Angkor Wat demonstrates that the temple is made up of an expansive enclosure wall, which separates the sacred temple grounds from the protective moat that surrounds the entire complex (the moat is visible in the photograph at the top of the page). The temple proper is comprised of three galleries (a passageway running along the length of the temple) with a central sanctuary, marked by five stone towers. 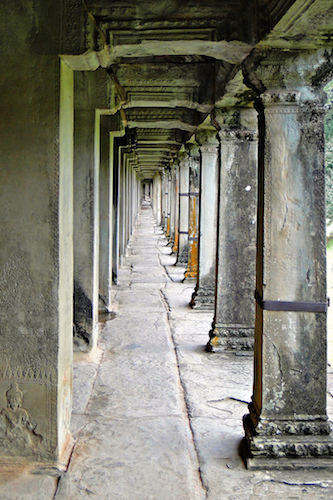 The five stone towers are intended to mimic the five mountain ranges of Mt. Meru—the mythical home of the gods, for both Hindus and Buddhists. The temple mountain as an architectural design was invented in Southeast Asia. Southeast Asian architects quite literally envisioned temples dedicated to Hindu gods on earth as a representation of Mt. Meru. The galleries and the empty spaces that they created between one another and the moat are envisioned as the mountain ranges and oceans that surround Mt. Meru. Mt. Meru is not only home to the gods, it is also considered an axis-mundi. An axis-mundi is a cosmic or world axis that connects heaven and earth. In designing Angkor Wat in this way, King Suryavarman II and his architects intended for the temple to serve as the supreme abode for Vishnu. Similarly, the symbolism of Angkor Wat serving as an axis mundi was intended to demonstrate the Angkor Kingdom’s and the king’s central place in the universe. In addition to envisioning Angkor Wat as Mt. Meru on earth, the temple’s architects, of whom we know nothing, also ingeniously designed the temple so that embedded in the temple’s construction is a map of the cosmos (mandala) as well as a historical record of the temple’s patron.

Angkor Wat as a Mandala

According to ancient Sanskrit and Khmer texts, religious monuments and specifically temples must be organized in such a way that they are in harmony with the universe, meaning that the temple should be planned according to the rising sun and moon, in addition to symbolizing the recurrent time sequences of the days, months and years. The central axis of these temples should also be aligned with the planets, thus connecting the structure to the cosmos so that temples become spiritual, political, cosmological, astronomical and geo-physical centers. They are, in other words, intended to represent microcosms of the universe and are organized as mandalas—diagrams of the universe.

Angkor Wat continues to play an important role in Cambodia even though most of the population is now Buddhist. Since the fifteenth century, Buddhists have used the temple and visitors today will see, among the thousands of visitors, Buddhist monks and nuns who worship at the site. Angkor Wat has also become an important symbol for the Cambodian nation. Today, the Cambodian flag has emblazoned on it the silhouette of Angkor Wat.

World Monuments Fund at Angkor Wat: The Churning of the Sea of Milk Gallery

At the magnificent temple of Angkor Wat, World Monuments Fund is restoring the Churning of the Sea of Milk Gallery. Rainwater and harmful salts have leaked through the roof of the gallery, which forms the south half of Angkor Wat’s prominent east façade, damaging the fragile surface of the frieze. Without treatment, the deterioration will increase at an alarming rate, risking the eventual loss of what most historians regard as the most ambitious and finely produced stone sculptures in Khmer art.