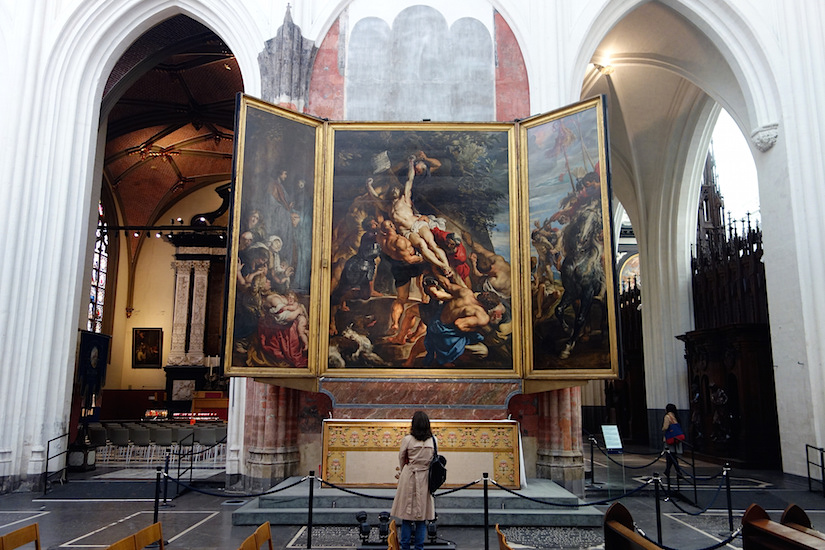 The Elevation of the Cross altarpiece is a masterpiece of Baroque painting by the Flemish painter Peter Paul Rubens. The work was originally installed on the high altar of the Church of St. Walburga in Antwerp (since destroyed), and is now located in the Cathedral of Our Lady in Antwerp.

This triptych (a painting—usually an altarpiece—comprised of two outer “wings” and a central panel) is impressive in its size, measuring 15 feet in height and 21 feet wide when open. The original frame, unfortunately lost, would have made the painting even more impressive in size! Due to its very size, Rubens actually painted it on-site behind a curtain. Four saints associated with the church of St. Walburga can be found on the exterior of the wings (visible when the altarpiece is closed): Saints Amandus and Walburga on the left and Saints Catherine of Alexandria and Eligius on the right.

Rubens was one of the most prolific and sought after painters of the Baroque period, generally (although not always) defined in painting and sculpture by the representation of action and emotion in ways meant to inspire the Catholic faithful (this triptych was painted less than a century after Martin Luther’s challenge to the authority of the Catholic Church).

In the central panel, we see the dramatic moment when the cross of Christ’s crucifixion is being raised to its upright position. Rubens created a strong diagonal emphasis by placing the base of the cross at the far lower right of the composition and the top of the cross in the upper left—making Christ’s body the focal point. This strong diagonal reinforces the notion that this is an event unfolding before the viewer, as the men struggle to lift the weight of their burden. 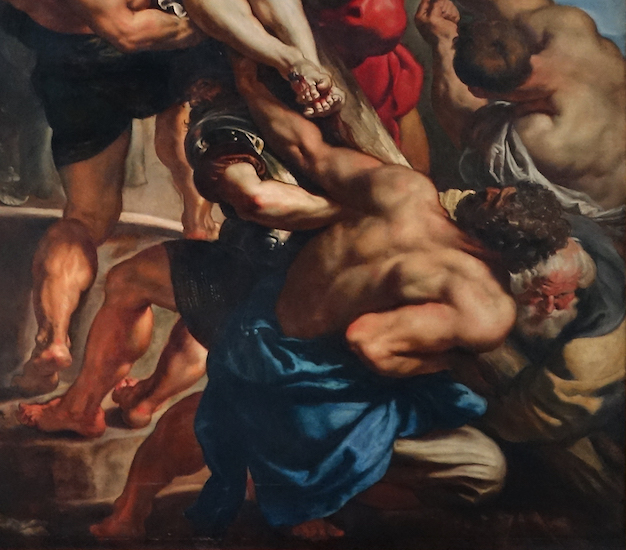 Adding to this dynamic tension is the visual sensation that the two men in the lower right are about to burst into the viewer’s space as they work to pull the cross upward (see image above). The viewer is caught in a moment of anxiety, waiting for the action to be complete.

In the left panel (below, left) are St. John the Evangelist and the Virgin Mary, who, standing in the shadow of the rocky outcrop above them, look to their left at what unfolds before their eyes. Shown in quiet resignation and grief over the fate of Christ, the group of women below is a stark contrast of overwrought emotion. Here too Rubens uses a diagonal along the line of the women from the lower right to the mid-left, setting John and Mary apart, allowing the viewer to focus on their reaction. 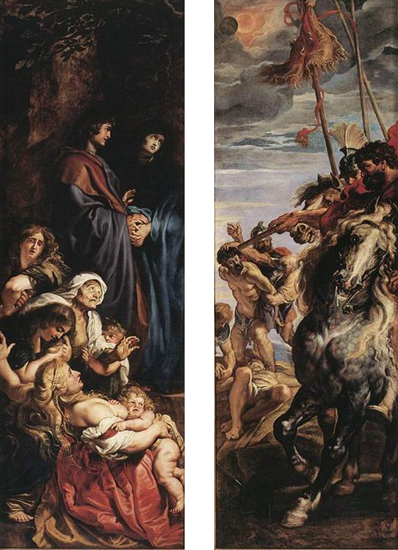 The right panel (above, right) continues the narrative event as Roman soldiers prepare the two thieves for their fate as they will be crucified alongside Christ. One thief—already being nailed to the cross on the ground—is foreshortened back into space, while the other—just behind him with his hands bound—is being forcefully led away by his hair. The diagonal Rubens created here runs the opposite direction as that in the left panel, moving from the lower left to the upper right along the line created by the leg and neck of the gray horse. These opposing diagonals further create tension across the composition, heightening the viewer’s sense of drama and chaotic action.

A unified narrative and biblical accuracy

In addition to the powerful figural composition, the three panels are visually unified through the landscape and sky. The left and central panels share a rocky outcropping covered with oak trees and vines (both of which have Christological significance). Notice that St. John, the Virgin Mary and the Roman soldiers just to the left of the cross are standing on the same ground-line. 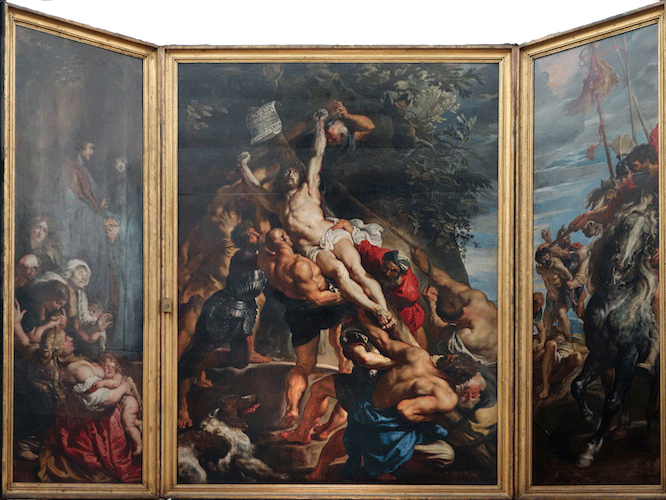 The unification of the central and right panels is accomplished through the sky, which begins to darken in the central panel, moving to the impending eclipse of the sun on the right, an event recounted in the Gospel of Matthew (27:45): “From noon on, darkness came over the whole land….” This attention to biblical accuracy is also seen in the text on the scroll at the top of the cross, which reads: “Jesus of Nazareth, King of the Jews,” written in Greek, Latin, and Aramaic, as told in the Gospel of John (19:19-21). In both cases, Rubens was adhering to one of the primary mandates of the Council of Trent (1545-63), which called for historical accuracy in the representation of sacred events (at the Council of Trent, church authorities essentially decided theological questions raised by Martin Luther and the Protestants, the period following the Council is known as the Counter-Reformation—the Catholic Church’s response to Martin Luther’s Protestant Reformation).

Rubens and a reflection of Italy 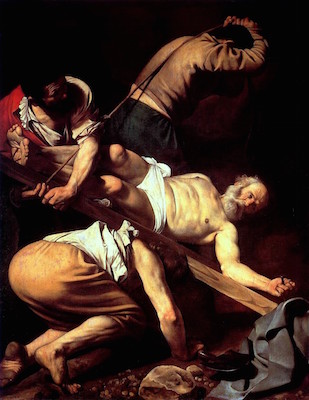 The Elevation of the Cross altarpiece was the first commission Rubens received after returning to Antwerp from his Italian sojourn from 1600 to 1608/9 where he worked in the cities of Mantua, Genoa, and Rome.

Given his extended time in Italy, it is not surprising that we see a number of Italian influences in this work. The richness of the coloration (notice the blues and reds throughout the composition) and Rubens’ painterly technique recalls that of the Venetian master Titian, while the dramatic contrasts of light and dark bring to mind Caravaggio’s tenebrism (darkness) in his Roman compositions, such as the Crucifixion of St. Peter (left). And indeed, we can clearly see Rubens’ interest in his Italian counterpart in the sense of physical exertion, the use of foreshortening—where figures push past the boundaries of the picture plane into the space of the viewer, and in the use of the diagonal.

In terms of the muscularity and physicality of Ruben’s male figures, a clear connection can be drawn to Michelangelo’s nude males (the ignudi) on the Sistine Chapel ceiling. In addition to looking at the works of past and contemporary masters, we know Rubens was also interested in the study of classical antiquity (ancient Greece and Rome). In fact, the figure of Christ seems to have been based on one of the most famous works of antiquity, the Laocoön, which Rubens made drawings of during his time in Rome. 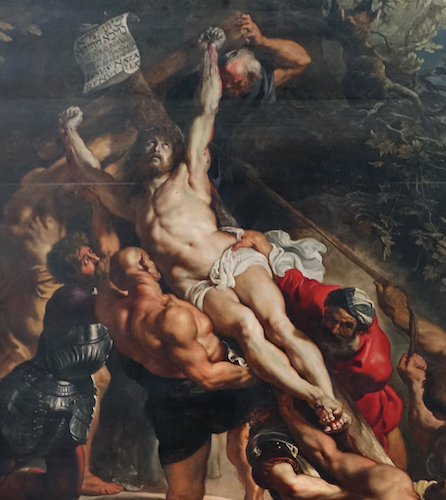 When the Elevation of the Cross altarpiece was placed on the high altar, there was a specific connection being forged between the subject of the painting and the function of the altar. The act of raising an object up is known in Latin as elevatio. During the Mass performed by the priest at the high altar, there is a moment when the Eucharistic wafer (miraculously transformed into the body of Christ) is elevated. Thus, when the congregation faced the high altar, they not only saw the elevatio of Christ’s cross but the elevation of the wafer, and thus the altarpiece and the ritual of the mass performed in front of it visually reinforced the message of Christ’s sacrifice on behalf of mankind.

Additional resources:
Photographs of the triptych
A study for the figure of Christ in the Harvard Art Museums
Biography of the artist from The National Gallery
Rubens on the Google Art Project 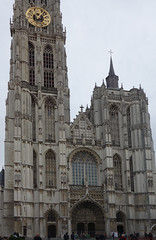 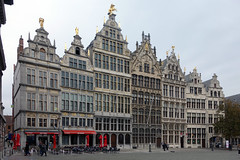 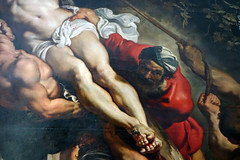 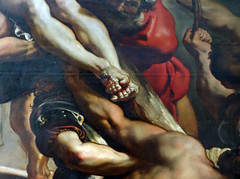 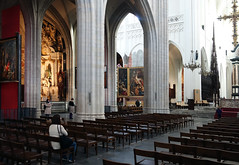 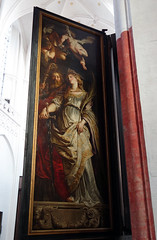 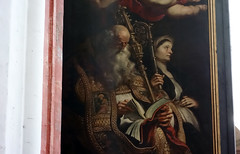 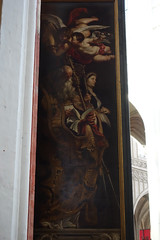 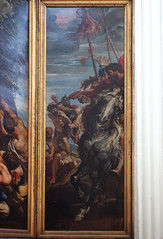 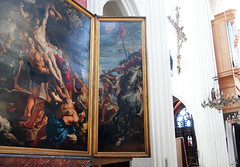 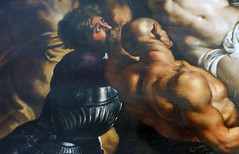