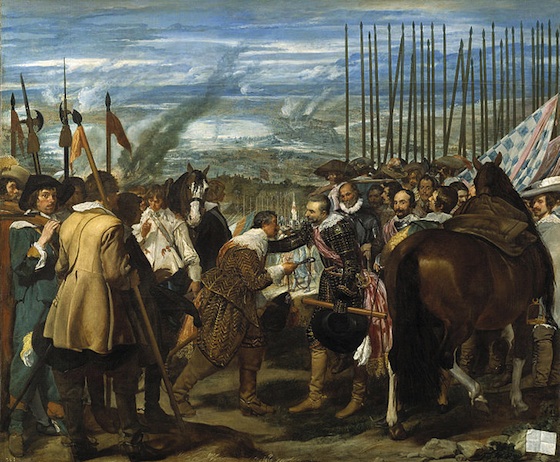 What defines a great leader

How military leaders treat their vanquished enemies conveys much of their character. In early modern Europe, paintings of military victories usually followed a preconceived structure: the victorious commander appeared seated high on his horse, or on a throne, while the capitulating general would kneel on the ground. Degraded and humiliated, the conquered army leader would prostrate himself in submission to the contempt of the triumphant general. But what happens if these dynamics are shifted? What would an image of an honorable commander showing respect for a conquered army communicate? Would a magnanimous leader be seen as weak? And how could abstract concepts such as honor or magnanimity be represented? Velazquez’s The Surrender of Breda revolutionized the genre of military painting precisely by emphasizing that to win with elegance and magnanimity is what defines a great leader, and not merely the ferocious capacity to triumph in combat.

A commission from the King of Spain

Between 1630 and 1635 the Spanish king Philip IV commissioned the construction of a royal palace just outside of Madrid. The Surrender of Breda was one of the paintings that decorated the most lavish room in that palace, the Hall of Realms. This multipurpose room had two important functions; it was a throne room, and it was a place for music and theatrical performances. As such, the Hall of Realms was the space where emissaries and ambassadors were received and entertained. When visitors entered the room, they encountered a highly ornate space decorated with large paintings that celebrated the Spanish king’s military victories. The Surrender of Breda is one of these paintings. It commemorates the capture of the city of Breda during the Eighty Years’ War, a conflict between Spain, which controlled the Low Countries, and the Dutch, who were fighting for political independence. 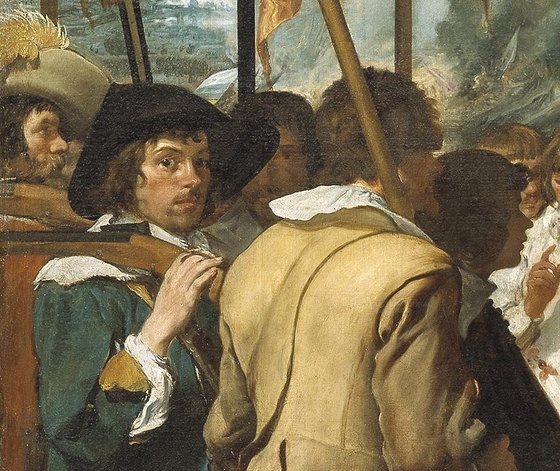 The aftermath of battle

Though the painting depicts a military victory, Velázquez removed the bloody and violent aspects of the battle from the canvas. Instead, he chose to present the aftermath of the battle: the capitulation of the Dutch to the Spanish troops. It is important to notice how Velázquez established the difference between these two groups. The Dutch, on the left, appear disorganized, youthful, and few in number. This contrasts with the Spanish troops located on the right, which are presented as a large, well-organized, and seasoned group. Velázquez’s depiction of the spears, vertically rising over the horizon, has received much attention, to the point that the painting is also known as The Lances. The numerous spears create a sense that there are more Spanish troops than we can actually see and, because of their ordered arrangement, they emphasize the military competence of the Spanish soldiers. 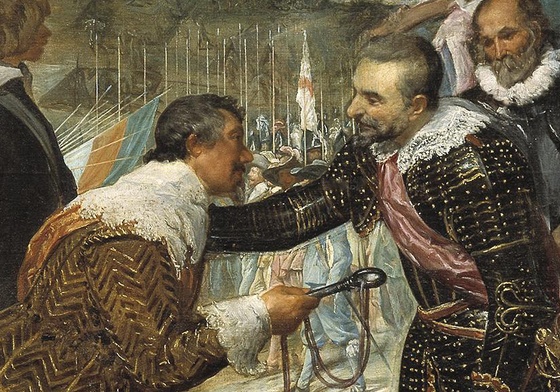 A painting about magnanimity

The center of the painting is dominated by the exchange of the keys. Ambrogio Spinola, the captain of the Spanish troops, receives the keys of the city from Justinus van Nassau. Having descended from his horse, and looking at the Dutch commander eye-to-eye, Spinola places his hand over Justinus’ shoulder, most likely in order to stop him from kneeling. This respectful gesture separates The Surrender of Breda from typical surrender scenes. In The Surrender of Breda, the battle remains in the distance, only noticeable because of the smoke columns rising in the background. It is the human encounter, in the foreground, that Velázquez emphasized. Hence, it is a painting about magnanimity as much, if not more, than a painting about military prowess.

Not a document of the event

Some aspects of the painting correspond to the historical reality of the event. After the siege, Spinola granted the Dutch army very generous terms of surrender; he ordered the Spanish army to respect the Dutch, who were allowed to leave Breda in military formation and carrying their ensigns. However, we should not let Velázquez’s naturalistic style deceive us. The Surrender of Breda is not a faithful reproduction of the event. It is highly unlikely that the encounter between the two commanders took place as depicted. The painter, who was not present at the siege of Breda, carefully constructed the scene to commemorate Spinola’s magnanimous character, not to document an event. Velázquez has subtly emphasized the figure of Spinola who, holding a baton of command, wears a distinct, splendid armor and a vivid magenta sash. At the same time, Velázquez’s astonishing skill is precisely shown in the easiness with which he transforms the viewers into eyewitness to an impromptu encounter. The muted earth tones and a soft light give the painting a naturalistic character. Without blatant symbols, allegorical figures, or even idealized figures, the viewer is invited to encounter the scene as if they had been there.

The painting presents a humane encounter in the midst of the chaos and cruelty of war. But we should not think that there are no ulterior motives for the presentation of this seemingly virtuous moment. Spinola, the Spanish troops, and by extension Philip IV, are presented as powerful and honorable. Thus the painting operates at multiple levels: it is a rhetorical exaltation of Spanish national identity, a symbol of Philip IV and his army, and a tribute to Spinola, a personal friend of Velázquez who had died a few years before the commission of the painting.

This painting at the Prado

This painting discussed on “Art Through Time”

About the Hall of Realms

This painting on Wikipedia