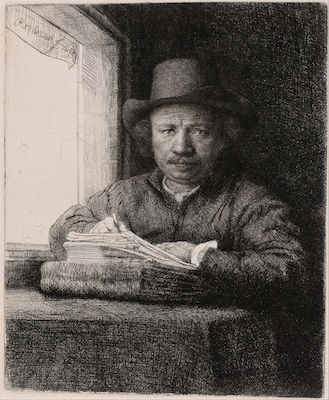 It would be difficult to overestimate the importance of Rembrandt Harmenszoon van Rijn within the history of Western art. Indeed, Rembrandt is considered one of the foremost artists of the Dutch Baroque period, and even if he had never picked up a paintbrush, he would have been famous both in his day and ours as a printmaker of particular brilliance and as a prolific teacher. In a career that lasted nearly forty years, Rembrandt completed approximately 400 paintings, more than 1,000 drawings, and nearly 300 engravings. Although he spent his entire life north of the alps, had he been Italian and lived a century or so earlier, he likely would have joined his Italian brethren—Donatello, Leonardo, Michelangelo, and Raphael, as a member of the famed cartoon Teenage Mutant Ninja Turtles.

But as time and place would have it, Rembrandt was neither Italian nor a part of the Renaissance. Instead, Rembrandt was born in Leiden in 1606. This place and time—Holland during the height of the expansion of the wealthy mercantile class during the middle half of the seventeenth century—served Rembrandt well through his long career. The Catholic Church often commissioned Italian artists at this time to undertake large-scale projects to promote religious ideology in support of the Counter-Reformation. Without the Catholic Church in Holland to commission art, Rembrandt and his fellow Dutch artists were lavishly supported by a wealthy, Protestant, and expanding middle class. This group of patrons enthusiastically commissioned works of art with their increasing discretionary income.

Many different types of art became popular during the Dutch Baroque period. Genre paintings—small paintings of everyday life—were exceptionally popular with a middle-class clientele, as were still lifes, landscapes, and prints. The majority of these kinds of art were both affordable and small enough to be easily displayed within an average home. Larger and more compositionally complicated, group portraiture also became popular in Holland during the seventeenth century. This was a mode of painting that was often placed in a public space so that the image could promote a particular organization. 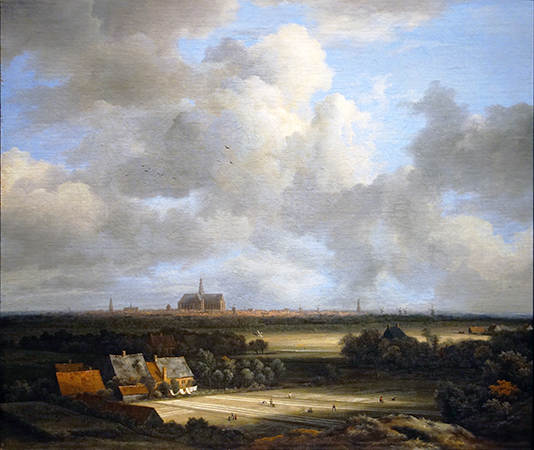 Although several of Rembrandt’s most well-known paintings are group portraits—The Anatomy Lesson of Dr. Tulp among others—his early education in Leiden, first at a Latin school and then later at the university, suggest that he was destined for a vocation other than art. However, by the time he was sixteen he decided he wanted to be a painter and a draughtsman. After finding quick success in Leiden during the 1620s, Rembrandt relocated to Amsterdam in 1631, a wise professional decision, as this was then one of the wealthiest and largest cities in Europe. 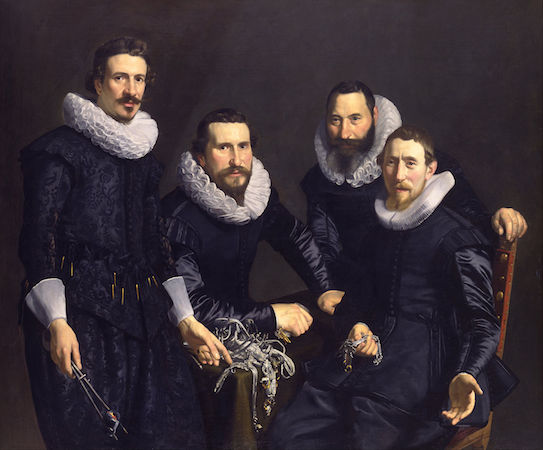 A group portrait for the Amsterdam Surgeon’s Guild 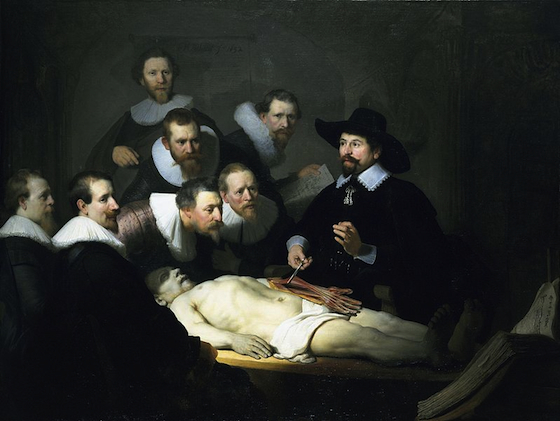 Just a year after his arrival, Rembrandt was offered the commission to complete a group portrait of the Amsterdam Surgeon’s Guild, an image that in time has come to be known rather simply as The Anatomy Lesson of Dr. Tulp. It is remarkable that Rembrandt received this commission as a newcomer to Amsterdam when there were other native-born artists available. Thomas de Keyser (above) and Nicolaes Pickenoy (below), for example, were older and more experienced in the realm of group portraiture. Whereas another artist may have simply recreated a previous group image—inserting new heads in place of old ones—Rembrandt created something new, and in doing so, completed one of the most recognizable images in the history of painting.

Dr. Nicolaes Tulp was appointed praelector (like a professor or lecturer) of the Amsterdam Anatomy Guild in 1628. One of the responsibilities of this position was to deliver a yearly public lecture on some aspect of human anatomy. The lecture in 1632 occurred on 16 January, and this is the scene that Rembrandt depicts in paint in The Anatomy of Lesson of Dr. Tulp. 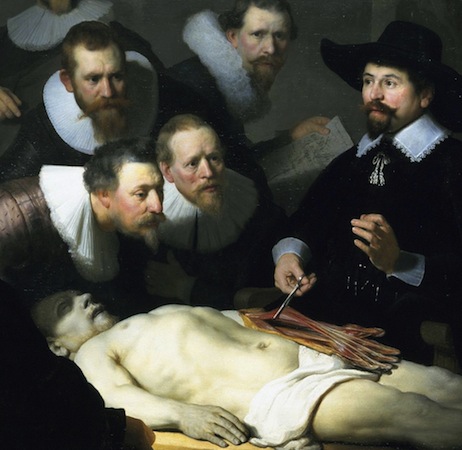 This is a more complicated composition than it at first appears. Understandably, the focal point of the image is Dr. Tulp, the doctor who is shown displaying the flexors of the cadaver’s left arm. Rembrandt notes the doctor’s significance by showing him as the only person who wears a hat. Seven colleagues surround Dr. Tulp, and they look in a variety of directions—some gaze at the cadaver, some stare at the lecturer, and some peek directly at the viewer. Each face displays a facial expression that is deeply personal and psychological. The cadaver—a recently executed thief named Adriaen Adriaenszoon—lies nearly parallel to the picture plane. Viewing the illuminated body from his head to his feet brings into focus a book—likely Andreas Vesalius’s De humani corporis fabrica (Fabric of the Human Body, 1543)—propped up in the lower right corner. In all, Rembrandt shows nine distinct figures, but does so as if they are a unified group. 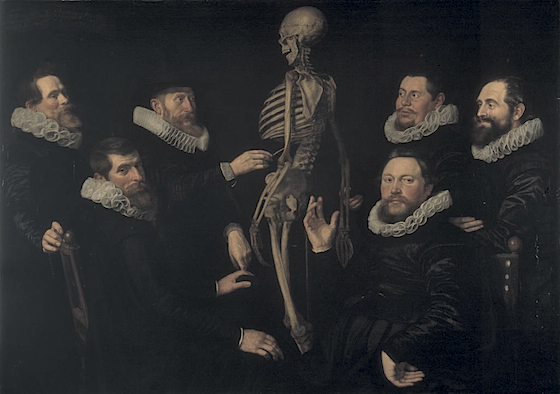 Comparing The Anatomy Lesson of Dr. Tulp to a somewhat similar example, The Osteology Lesson of Dr. Sebastiaen Egbertszoon, shows just how different and novel Rembrandt’s composition was at the time. The Sebastiaen Erbertszoon painting is a series of six portraits that surround a single human skeleton; but neither the heads nor the bodies seem to interact with one another in a real or coherent way. In contrast, the figures in Rembrandt’s Tulp seem to truly be a group, one collection of nine rather than nine individuals.

If the composition is different from what Rembrandt might have seen in Amsterdam, the choice of subject is different than what would have been expected in the parts of Europe that were Catholic. The Catholic tenet of resurrection necessitated that dead bodies be interred in a state of wholeness, and this fact explains why Leonardo was forced to dissect human bodies in secret. In Protestant Holland but 113 years after Leonardo’s death, however, human dissections were not only common practice, they were often public spectacles, complete with food and wine, music and conversation. 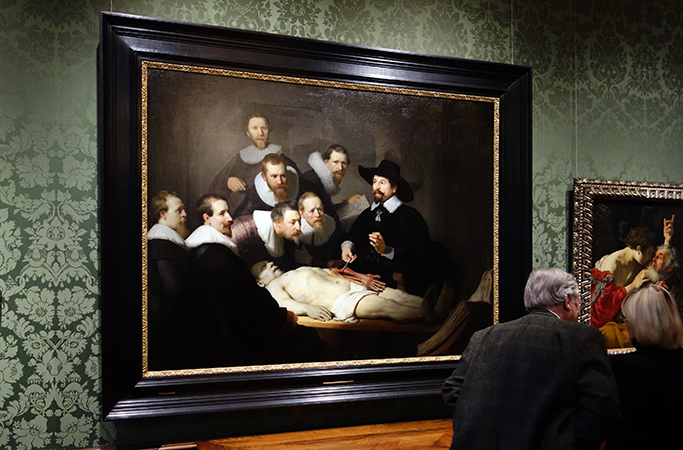 View of Rembrandt van Rijn, The Anatomy Lesson of Dr. Tulp hanging in the Mauritshuis in The Hague (Netherlands)

If Rembrandt was able to create a truly group portrait—one of a single group rather than a collection of individuals—it is important to note that the artist took some understandable artistic license with some parts of the composition. As any anatomy and physiology student today can attest, a dissection of the human body almost always commences with an exploration of the chest and abdominal areas, parts of the human body most likely to decompose first, and only later does the procedure move onwards to the limbs. Moreover, it would have been unlikely that a doctor of Tulp’s importance would have actually dissected the body; instead, he would have lectured while the menial task of exposing the inner workings of the body would have been left to others. But in paint, a format without sound, Rembrandt put Tulp in charge not only in costume, but also in action. 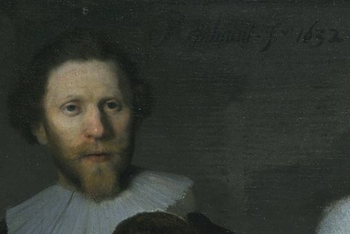 As the prominent signature in the upper part of the painting indicates, Rembrandt was justifiably proud of this large painting.

Whereas he had previously signed his works with his monogram RHL (Rembrandt Harmenszoon of Leiden), The Anatomy Lesson of Dr. Tulp contains Rembrant. f[ecit] 1632. This painting and the Latin announcement that “Rembrandt made it” marks the beginning of the painter’s mature career. 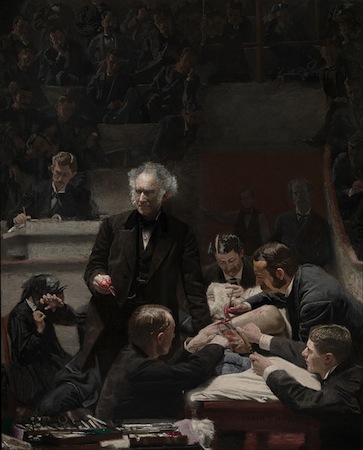 Daring, compositionally innovative, and deeply psychological, The Anatomy Lesson of Dr. Tulp launched Rembrandt to fame and wealth and influenced generations of artists to come. Indeed, without Tulp, it seems impossible for Thomas Eakins to have painted The Gross Clinic, 1876 almost two and a half centuries later. 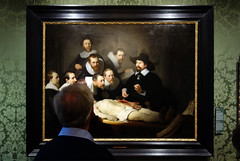 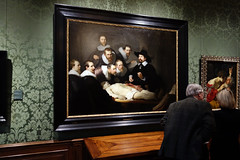 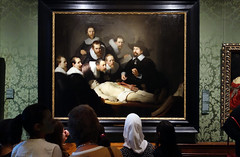 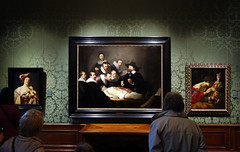 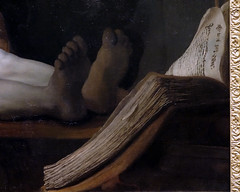 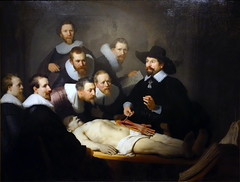 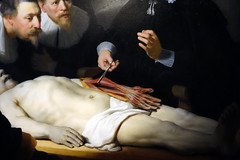