The following is a conversation about Donatello’s David between Dr. Beth Harris and Dr. Steven Zucker: 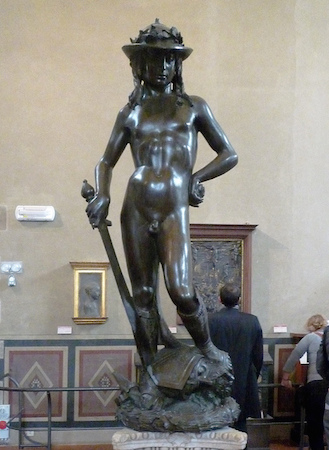 SZ: Seeing Donatello’s David in the Bargello in Florence makes me realize just how different it is from the later, more famous version of David by Michelangelo. It feels so much more intimate and so much less public.

BH: Well, it is MUCH smaller! After all, this one is only about five feet tall—that’s a few inches shorter than me. And Michelangelo’s David is more than three times this size!

SZ: Because of the small size, and perhaps also because of the warm tones of the bronze, this sculpture seems so immediate and beautiful and vulnerable.

BH: Yes, and of course, Michelangelo’s marble sculpture WAS a public sculpture—it was meant to go in a niche high up in one of the buttresses  of the Cathedral of Florence, commissioned by the Office of Works for the Cathedral. We don’t know who commissioned Donatello’s David, but we do know that it was seen in the courtyard of the Medici Palace in Florence, a much more private and intimate setting.

SZ: This intimacy is not simply a result of the nudity, but also of the emotional experience Donatello renders through the face and even the stance of the body—and it’s so unexpected in the telling of the story of David and Goliath! I would expect rather a triumphal victorious figure, maybe holding the sword and the enemy’s severed head aloft… Instead, here is a thoughtful, quiet, contemplative face.

BH: I don’t know, he doesn’t look so contemplative to me—instead he seems proud of his victory over the giant Goliath—which is strange since the story is very much about how David defeats Goliath because he has God’s help—he doesn’t do it on his own!

SZ: Really? Look at his calm, downcast eyes… the lids are half closed. That is not the usual expression of victory. Note that the facial muscles are totally relaxed, the mouth is lightly closed though there is the slightest hint of a smile—and yes, that is subtle pride, but to me this is the face of interior thought not exterior boasting. It’s as if he is coming to terms with the events that have taken place, including God’s intervention, here Donatello foreshadows the wisdom that will define his later reign as king. 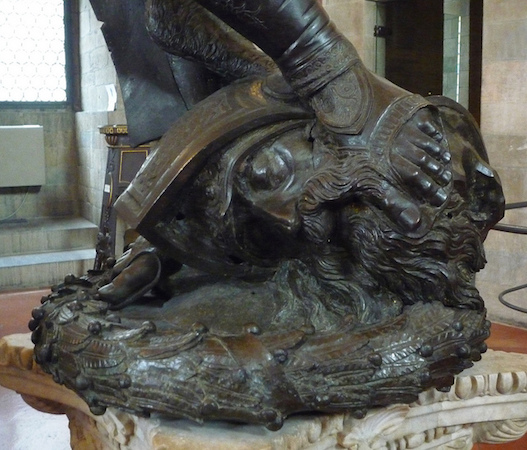 BH: Fair enough, perhaps it’s primarily his pose that speaks of pride to me. The relaxed contrapposto and the placement of his left hand nonchalantly on his hip feels to me like confidence and pride. His right hand holds the sword that he used to cut off Goliath’s head, which we see below, resting on a victory wreath. The gruesome head seems to conflict with the sensuality and beauty of the young David.

SZ: Agreed. There is a certain swagger in that stance and the horrific contrast to the head of Goliath is wild and unnerving. But the contrapposto is also Donatello’s swagger, the sculptor’s rendering of David offers the most complete expression of this natural stance since antiquity. We know he was studying ancient Roman art with his friends, Masaccio and Brunelleschi and it’s worth noting that he reclaims more than just the classical knowledge of contrapposto, he has also reclaimed the large-scale bronze casting of the ancient world. It must have been such an extraordinary revelavation for a culture that until this moment, had not seen human-scaled bronze figures.

BH: It IS amazing how Donatello, after a thousand years, reclaims the ancient Greek and Roman interest in the nude human body. Of course, artists in the middle ages, a period when the focus was on God and the soul, rarely represented the nude. Donatello does so here with amazing confidence, you’re right. In fact, this is the first free-standing nude figure since classical antiquity, and when you consider that, this achievement is even more remarkable! But let’s face it, there’s an undeniable sensuality here that almost makes us forget that we’re looking at an old testament subject. 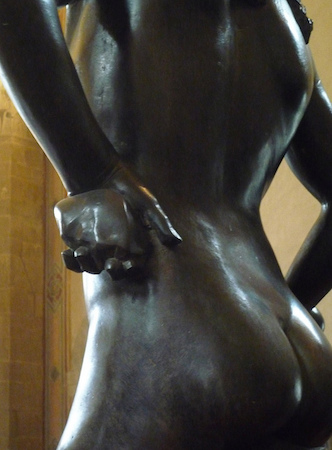 SZ: Right, Donatello’s figure of David is almost too sensuous for the subject being represented. In some sense this isn’t really a Biblical representation at all; Donatello seems to have used the excuse of the boy who eschews armor in order to represent not the Judaic tradition but instead the ancient Greek and Roman regard for the beauty of the human body and he uses the classical technique of lost wax to cast the form. Then, just like the Greeks and Romans, he worked the bronze to smooth the seams and the surface and to cut in details such as in the hair.

BH: I think it’s important to stress that this figure is free-standing. Sculpted figures have finally been detached from architecture and are once again independent in the way they were in ancient Greece and Rome. And because he’s free-standing, he is more human, more real. He seems able to move in the world, and of course the contrapposto does that too. It’s easy to imagine this figure in the Medici palace garden, surrounded by the ancient Greek and Roman sculpture that they were also collecting. I wish I could go back in time to Florence in the 1400s, to this remarkable moment, to witness the rebirth of Humanism.

SZ: I’d love to meet the artists and thinkers of the era but am not at all sure that I would find their world hospitable. Disease, want, cruelty, and a permanent hierarchy among social strata defined the period—not to mention the terrible position women found themselves in. You can go, I’ll stay here in the twenty-first century thank you!

BH: Like David, Florence was the underdog that withstood repeated attacks from Milan and yet, like young David, thanks to God’s favor, Florence was victorious (or at least that’s how the Florentines interpreted these events!). And as a result, many Florentine artists will tackle this subject.

SZ: True, and each one will have to grapple with Donatello’s great achievement. 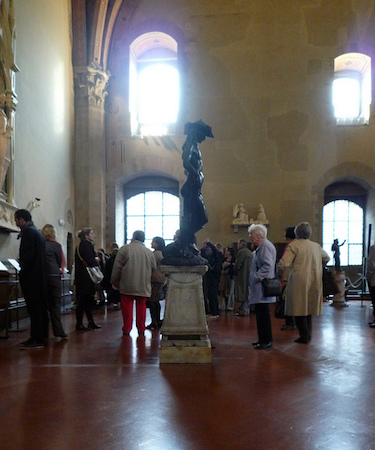 The subject of this sculpture is David and Goliath, from the Old Testament. According to the story, Israel (the descendents of Abraham, Isaac and Jacob) is threatened by Goliath, a “giant of a man, measuring over nine feet tall. He wore a bronze helmet and a coat of mail that weighed 125 pounds.” Goliath threatened the Israelites and demanded that they send someone brave enough to fight him. But the entire Israelite army is frightened of him. David, a young shepherd boy, asserts that he is going to fight the giant, but his father says, “There is no way you can go against this Philistine. You are only a boy, and he has been in the army since he was a boy!” But David insists that he can face Goliath and claims he has killed many wild animals who have tried to attack his flock, “The LORD who saved me from the claws of the lion and the bear will save me from this Philistine!” They try to put armor on David for the fight, but he takes it off. David faces Goliath and says to him,”You come to me with sword, spear, and javelin, but I come to you in the name of the LORD Almighty—the God of the armies of Israel, whom you have defied.” David kills Goliath with one stone thrown from his sling into Goliath’s forehead. Then he beheads Goliath.

The people of Florence identified themselves with David—they believed that (like him) they defeated their enemy (the Duke of Milan) with the help of God. 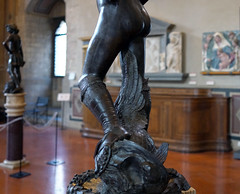 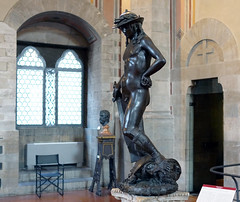