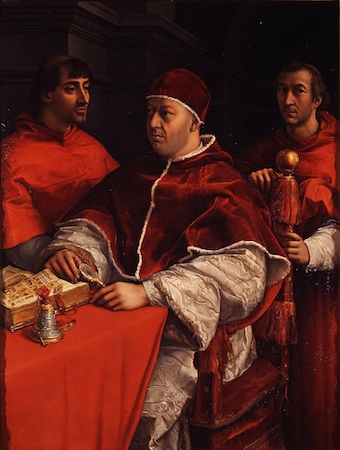 No hint of chaos

Pope Leo X, son of Lorenzo de’ Medici, is best known for his wasteful habits, lecherous activities, and hedonistic quote, “Since God has given us the papacy, let us enjoy it.” But, judging from his portrayal in Raphael’s 1518 Portrait of Leo X with Cardinals Giulio de’ Medici and Luigi de’ Rossi, one would never guess that Leo’s policies were ripping Christendom apart and would directly lead to the Protestant Reformation. Rather, Leo and his two illegitimate relatives—on the left, his nephew Giulio de’ Medici (later Pope Clement VII, who was responsible for the disastrous 1527 Sack of Rome) and on the right, his cousin Cardinal Luigi de’ Rossi—are presented as dignified, stalwart men, giving no hint of the chaos into which they were throwing Italy and the entire Christian world. 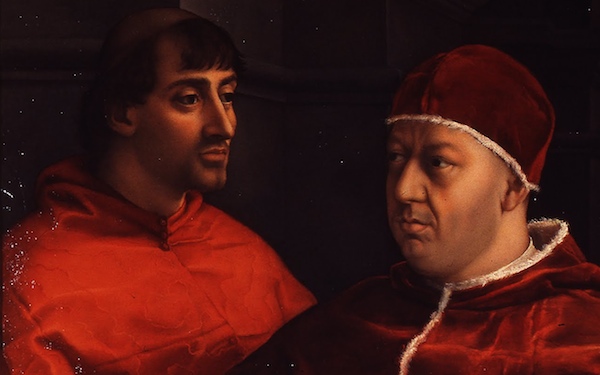 The painting is dominated by Leo, whose corpulent body and sumptuous dress are the only indications of the pope’s penchant for excess. He looks off into the distance, beyond the edge of the painting, and holds a magnifying glass while turning the page of his Bible. This gives the impression that he is reacting to someone who has just entered the room. The poses of both other men indicate their relationships with Leo. Giulio stands on the left of the painting, looking out to the other direction; his posture and gaze mirror Leo’s. Giulio was considered a man of great authority, and was called by a Vatican chronicler, “Leo’s other self.” Luigi de’ Rossi, the pope’s cousin and best friend, is the only person who looks at the viewer, and his hands are touching the pope’s chair. The two had been raised together, and Leo was said to have been devastated after Luigi’s 1519 death of gout (an affliction that habitually plagued the Medici). The painting is dominated by red paint, the color of the papacy. 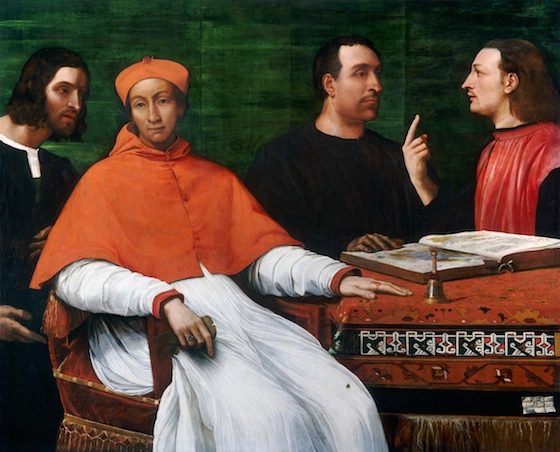 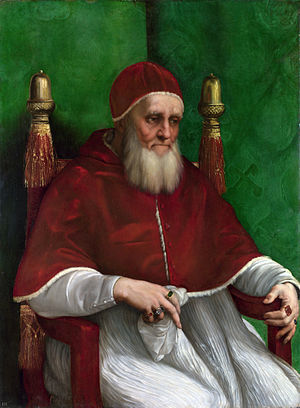 Although the composition of Raphael’s painting has been considered revolutionary, it actually has several precedents, such as Sebastiano del Piombo’s 1516 Cardinal Bandinello Sauli, His Secretary, and Two Geographers. But because this painting is so different from other portraits by Raphael, such as his Portrait of Julius II, and because infrared x-rays of the work show that Raphael originally conceived the composition to show only Leo, like Julius, in front of a green background, many people have wondered what to make of this very odd portrait.

Significantly, the painting was sent to Florence from Rome. This has led many people to believe that the portrait was made for the wedding of his nephew, which Leo knew he could not attend. That way, the three Medici relatives could still be “present” at the event.  However, the men are shown in their winter clothes, indicating that Raphael painted it a long time before the wedding; it is unlikely that Leo knew he would not be able to attend that far in advance. More importantly, Luigi de’ Rossi was at the wedding, further evidence that although the painting was set up at the event, it was probably originally intended for other purposes.

Some art historians have interpreted it as a dynastic portrait. Leo was the first Medici to attain the papacy, one of the most important offices in the entire world, and he quickly elevated his family members to high ranks within the Vatican. The Bible shown with Leo has been identified as a copy of the Hamilton Bible owned by Leo’s father, Lorenzo the Magnificent, indicating his Medici lineage. The bell on the table is a symbol of power, as it was used to summon servants, and is covered with Medici insignia, such as feathers, diamonds, and the Medici palle, or “balls,” which were the most recognizable symbols of the family. Some have suggested that the globe on Leo’s chair is also meant to recall the palle. 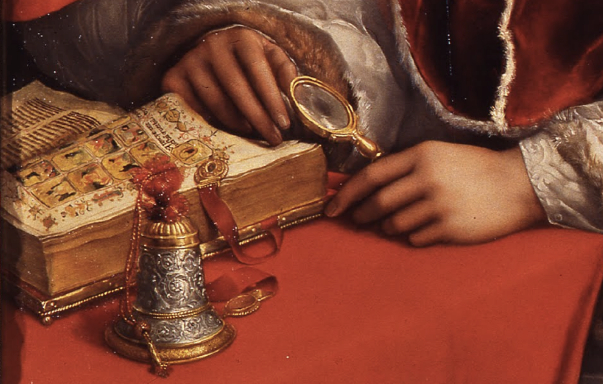 Most convincing is the suggestion that the portrait was made for religious purposes. In 1517, Martin Luther posted his 95 Theses condemning the abuses of the church, among which were the selling of indulgences, which Leo had used to fund the construction of Saint Peter’s Basilica. Although Luther would not split from the church for many years, the threat to the church was palpable. Art historians have noted that Leo is turning the page of his Bible from the last passage of the Book of Luke to the first of the Book of John. In Luke, Jesus is exhorting the Apostles to pray often in the Temple. This has been interpreted as a direct rebuke to Luther’s opposition to the building of Saint Peter’s Basilica. The Book of John begins, “There was a man sent from God, whose name was John. He came for testimony, to bear witness to the light, that all might believe through him.” Since Leo’s birth name was Giovanni (the Italian version of “John”), this scriptural passage can be understood to assert that it is only through the obedience to the pope, Giovanni de’ Medici, and official Vatican doctrines that one can achieve salvation. This is in direct contrast to Luther’s belief that salvation could be achieved through faith in God alone. 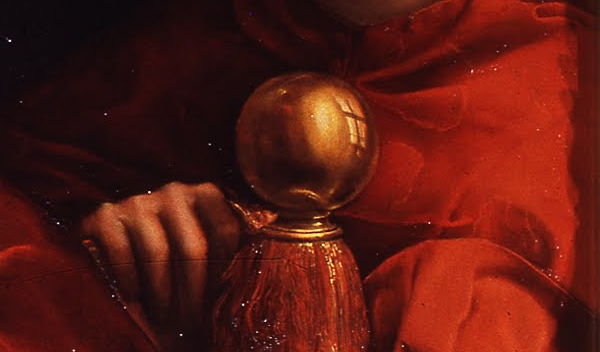 Overall, Raphael’s portrait has been lauded as a masterful piece of realism. The unflattering likeness of Leo, along with intricate details, such as the reflection of the interior of the room on the metal surface of the ball on the chair, show a complete mastery of the art of painting and a conception of naturalism entirely in keeping with the goals of the High Renaissance. It is ironic that modern viewers can look at Raphael’s painting, meant to glorify the Medici and the authority of the pope, as a portrait of two of the worst popes in history: Leo X saw the Christian church cleaved in half, and Clement VII hid in safety as the city of Rome was destroyed around him.