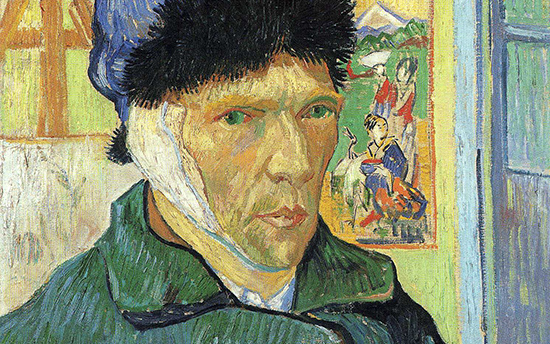 The following report appeared in the Arles journal Le Forum Republicain on December 30, 1888:

Last Sunday, at 11:30 in the evening, Vincent Vaugogh [sic], a painter of Dutch origin, called at the Brothel No. 1, asked for a woman called Rachel and handed her … his ear, saying: ‘Guard this object with your life’. Then he disappeared. When informed of the action, which could only be that of a pitiful madman, the police went the next day to his house and discovered him lying on his bed apparently at the point of death. The unfortunate man has been rushed to hospital.

Accounts of what took place that night vary. Whatever the exact circumstances, though, whatever underlying motivations could have compelled van Gogh to do it, the episode effectively put an end to one of the most famous working relationships in the history of art, as Paul Gauguin boarded the train to Paris the next day.

For nine weeks they had lived together sharing lodgings in the Yellow House, just outside the old town walls of Arles in the South of France, spurring each other on as collaborators and as rivals too. The dream had been to set up “a studio in the South,” as van Gogh put it, a community of artists, with himself and Gauguin, the founding fathers, all working in harmony with nature and, as he hoped, with each other.

The painting, completed two weeks after the event, is often read as a farewell to that dream. For Steven Naifeh and Gregory White Smith, the most recent biographers of the artist, however, the portrait was first and foremost a plea to van Gogh’s doctors. 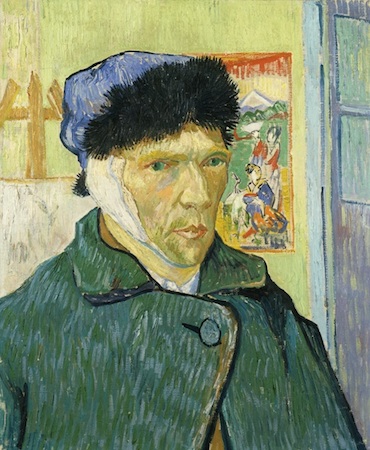 It shows the artist in three-quarter profile standing in a room in the Yellow House wearing a closed coat and a fur cap. His right ear is bandaged. It was in fact his left ear that was bandaged, the painting being a mirror image. To his right is an easel with a canvas on it. Barely visible, a faint outline underneath reveals what looks to be a still-life which appears to have been painted over. The top of the easel has been cropped by the edge of the canvas and the sitter’s hat so as to form a fork-like shape. To his left is a blue framed window, and partly obscured by the gaunt ridge of his cheek, a Japanese woodblock print shows two geishas in a landscape with Mount Fuji in the background.

Naifeh and White Smith argue that van Gogh, following his release from hospital, was anxious to persuade his doctors that he was indeed perfectly fit and able to take care of himself and that, despite his momentary lapse, it would not be necessary for them to have him committed, as had been suggested, to one of the local insane asylums; hence the winter coat and hat, to keep warm as they had advised, and with the window ajar still getting that much-needed fresh air into his system. The bandage too, which would have been soaked in camphor, suggests that he both accepts what has happened and is happy, literally, to take his medicine. The same note of stoic optimism, if one wishes to read the painting this way, is also found in the letters to his brother Theo, in which van Gogh, far from abandoning his dream of a “studio in the South,” talks of continuing the project, expressing the desire for more artists to come to Arles, even proposing that Gauguin and he could “start afresh.”

Yet, of course, whether or not van Gogh was willing to admit to it, the project had most definitely reached its end. And though for a short time he did get to carry on living in the Yellow House, within a few weeks, acting on a petition handed in to the local authorities and signed by 30 of his neighbors, he was forcefully removed and taken to Arles Hospital where he was locked in an isolation cell. In May van Gogh committed himself to the private asylum in Saint-Remy a small town north of Arles and in a little over a year he was dead.

An obsession with Japanese Art

Though Naifeh and White Smith’s argument is convincing, how the artist accounts for himself in his letters and how he expresses himself in paint, are different things. For my own part, what is most interesting about the image is what it reveals about van Gogh’s artistic practice and particularly his obsession with Japanese art: “All my work to some extent is based on Japanese art,” he wrote in July, 1888.

Three years earlier, while in the port city of Antwerp in Belgium, he would wander through the markets there where woodblock prints of the Ukiyo-e school, the so-called “artists of the floating world” were readily available and could be bought for just a few centimes. These first glimpses into the art of Japan came at a pivotal moment in the artist’s career: half way between his native Holland where he had schooled himself in the Realist tradition of artists such as Jozef Israëls, with his dark, earthy palette and sympathy for the rural poor, and Paris where he would encounter the colorful urbanity of the Impressionists.

For van Gogh, the artists of Japan offered the perfect meeting-point of theory and practice. The most famous of them was Hokusai, “the Dickens of Japan,” who shared the Dutchman’s passion for depicting the lives of the poor. It was this compassionate dimension of Japanese art that van Gogh hoped to bring to Impressionism, a movement that—by the time he arrived in Paris in 1886—had already absorbed the visual inventiveness of the Ukiyo-e school.

As time went on, the links went still further. In his two-year sojourn in Paris, the city of strangers, it was fellowship above all else that he yearned for, and so he came to imagine the Impressionists, among whose ranks he claimed to belong, to be as he imagined the Japanese, a united body of artists, sharing the same goals and ideals. It was this that prompted the journey south. On arriving in Arles he wrote to his brother, declaring his hope that “other artists will rise up in this lively country and do for it what the Japanese have done for theirs.” And again, while decorating his new house with paintings of sunflowers, he wrote to Theo: “Come now, isn’t it almost a true religion which the simple Japanese teach us, who live in nature as though they themselves were flowers.” 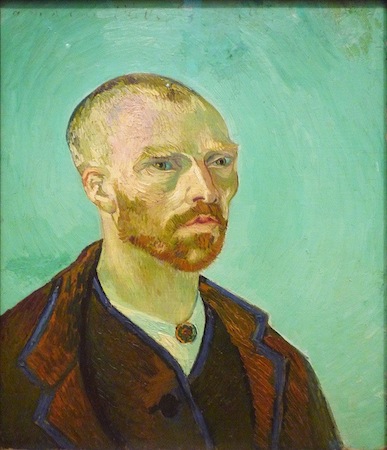 It was in Arles that he read Pierre Loti’s novel Madame Chrysanthème, best known today as the literary source for Puccini’s opera Madame Butterfly. While its self-sacrificing heroine worked her graceful way into van Gogh Orientalist fantasies, Loti’s description of Buddhist priests inspired his own Self-Portrait (Dedicated to Paul Gauguin), a painting that draws out the direction he hoped the two artists would follow.

How very different Self-Portrait with Bandaged Ear is to this earlier portrait. With its formal setting; the repeated triangles, for example, in the form of his coat, the top of the easel and the view offered of Mount Fuji itself, lending the painting it’s aspirational quality, its upward thrust. And yet the dominant feeling is surely conveyed by the internal frames: the window, the canvas and print, each of which appears condensed and somewhat forced into the painting, as though hemming the sitter in. 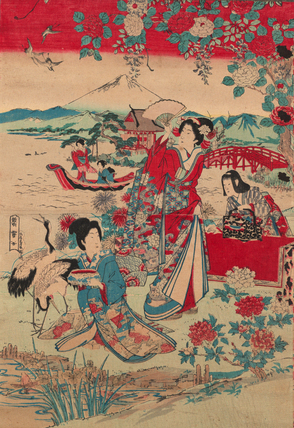 The Japanese print as van Gogh painted it in Self-Portrait with Bandaged Ear differs from the original. Comparing them we see how van Gogh shifted the composition to the right, deliberately discarding one of the figures in favour of the heron, whose razor-sharp beak rears up as if to stab at the artist’s ear. Opposite it, the canvas squeezed in to the left with its ghostly imprint of flowers surmounted by the fork of the easel sets up a formally satisfying but psychologically unsettling parallel. Is there a hint in all this, albeit unconsciously expressed, that the dream of an artist’s community in Arles has turned against him?

Perhaps, but then of course there is always van Gogh’s color—the joyous application of pigment onto canvas, the glorious use of impasto, thick and swift; that fabulous hatching technique, in places evoking the textures it depicts, the weave of the coat, the threads of the bandage, the fur of the hat.  And note the tonal array of strokes that make up the face: violet, green, red, brown, orange, straw yellow; the blacks centered in those piercing pupils. 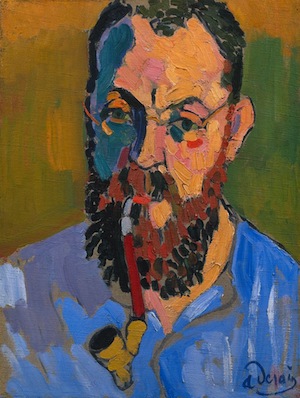 A yearning to be proved sane or a heartfelt cry of anguish, whatever we may read in the image about van Gogh the man, from a purely art historical point of view, it is here in his brushwork and in his palette that one discovers the source of André Derain’s “deliberate disharmonies.” How fitting then that it was while on holiday in the South of France, a favorite haunt of that early Modernist movement to which he belonged—the Fauves—that Derain painted his friend and fellow artist Matisse; enough perhaps to say that Van Gogh’s hope and prediction that “other artists will rise up in this lively country” was not so wildly off the mark after all.

This painting in The Guardian