The Tomb of Pope Julius II

When Michelangelo finished sculpting David, it was clear that this was quite possibly the most beautiful figure ever created—exceeding the beauty even of Ancient Greek and Roman sculptures. Word of David reached Pope Julius II in Rome, and he asked Michelangelo to come to Rome to work for him. The first work Pope Julius II commissioned from Michelangelo was a tomb for the pope.

This may seem a bit strange to us today, but great rulers throughout history have planned fabulous tombs for themselves while they were still alive—they hoped to ensure that they would be remembered forever. 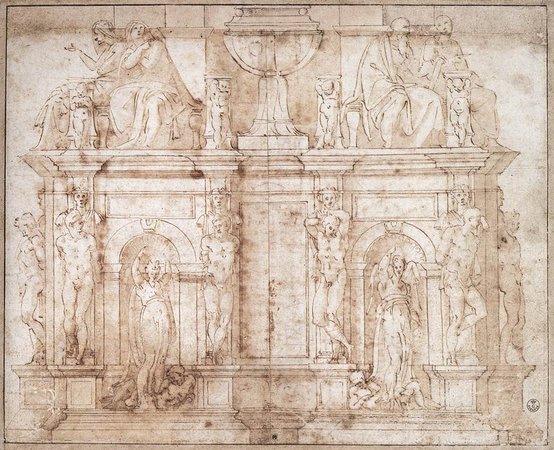 When Michelangelo began the Tomb of Pope Julius II, his ideas were quite ambitious. He planned a two-story structure decorated with more than 20 sculptures—each of these life sized. This was more than one person could do in a lifetime. 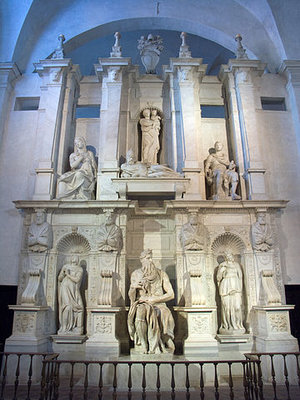 Pope Julius II asked Michelangelo to pause his work on the tomb to paint the ceiling of the Sistine Chapel and he was never able to complete his plan for the tomb. After experiencing trouble with Julius’ heirs, Michelangelo eventually completed a much scaled-down version of the tomb, which was installed in San Pietro in Vincoli (and not in St. Peter’s Basilica as planned).

Moses is an imposing figure—he is nearly eight feet high sitting down! He has enormous muscular arms and an angry, intense look in his eyes. Under his arms he carries the tablets of the law—the stones inscribed with the Ten Commandments that he has just received from God on Mt. Sinai. You might marvel at Moses’ horns. This comes from a mistranslation of a Hebrew word that described Moses as having rays of light coming from his head. 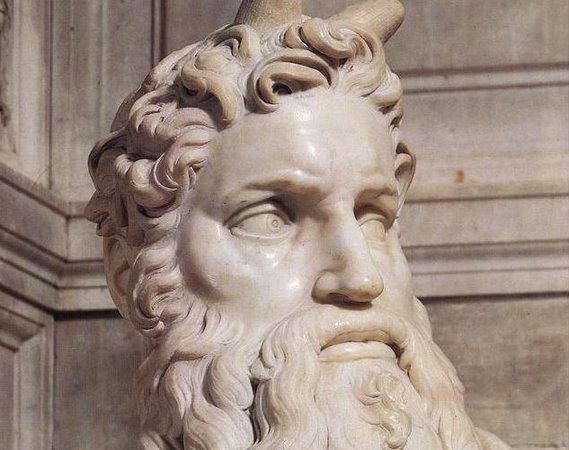 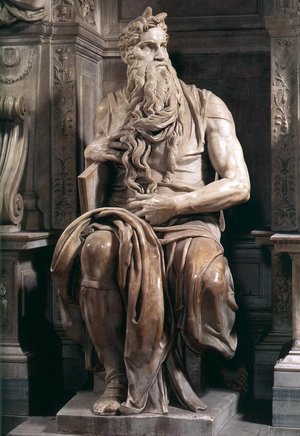 In this story from the Old Testament book of Exodus, Moses leaves the Israelites, who he has just delivered from slavery in Egypt, to go to the top of Mt. Sinai. When he returns, he finds that the Israelites have constructed a golden calf to worship and make sacrifices to. They have, in other words, been acting like the Egyptians and worshipping a pagan idol.

One of the commandments Moses received is “Thou shalt not make any graven images,” so when Moses sees the Israelites worshipping this idol and betraying the one and only God who has just delivered them from slavery, he throws down the tablets and breaks them. Here is the passage from the Hebrew Bible:

Then Moses turned and went down the mountain. He held in his hands the two stone tablets inscribed with the terms of the covenant. They were inscribed on both sides, front and back. These stone tablets were God’s work; the words on them were written by God himself. When Joshua heard the noise of the people shouting below them, he exclaimed to Moses, “It sounds as if there is a war in the camp!” But Moses replied, “No, it’s neither a cry of victory nor a cry of defeat. It is the sound of a celebration.” When they came near the camp, Moses saw the calf and the dancing. In terrible anger, he threw the stone tablets to the ground, smashing them at the foot of the mountain. (Exodus 32: 15-19)

We can see the figure’s pent-up energy. The entire figure is charged with thought and energy. It is not entirely clear what moment of the story Michelangelo shows us. Moses sits with the tables of the ten commandments under his right arm. Is he about to rise in anger after seeing the Israelites worshiping the golden calf? 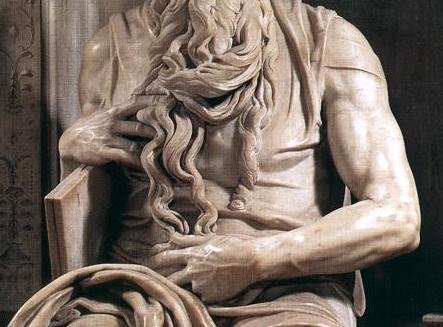 Moses is not simply sitting down; his left leg is pulled back to the side of his chair as though he is about to rise. And because this leg is pulled back, his hips also face left. Michelangelo, to create an interesting, energetic figure—where the forces of life are pulsing throughout the body—pulls the torso in the opposite direction. And so his torso faces to his right. And because the torso faces to the right, Moses turns his head to the left, and then pulls his beard to the right.

Michelangelo managed to create an intense, energetic figure even though Moses is seated. While the marble itself is still, it seems as though his beard is moving and flowing and that his muscular arms and torso are about to shift.

In comparing Michelangelo’s Moses to an Early Renaissance sculpture by Donatello, it is easy to see the difference between the Early and High Renaissance ideals. Donatello’s relaxed figure St. John really lacks the power and life of Michelangelo’s sculpture. Think about how you’re sitting right now at the computer. Perhaps your legs are crossed, as mine are as I write this. What about if you were not at the computer? And what to do with the hands? You can see that this could be a rather uninteresting position. Yet Michelangelo has given the entire figure energy and movement, even in a sitting position.

In Michelangelo’s dynamic figure of Moses we have a clear sense of the prophet and his duty to fulfill God’s wishes. Moses is not a passive figure from the distant biblical past, but a living, breathing, present figure that reflects the will and might of God. 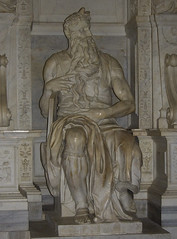 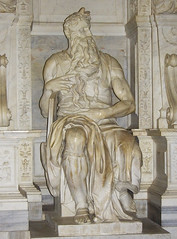 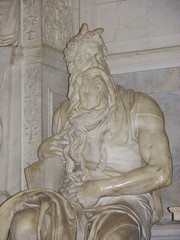