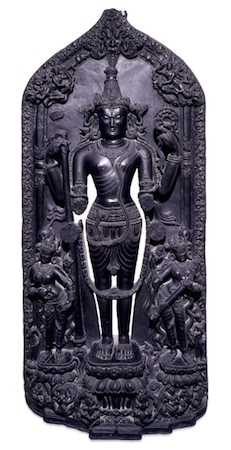 Vishnu is one of the most popular gods of the Hindu pantheon. His portrayal here is standard: a royal figure standing tall, crowned and bejeweled, in keeping with his role as king and preserver of order within the universe. He carries a gada (mace) and chakra (disc) in his hands. The other two hands, which would have held a lotus and conch, are broken. On his forehead he wears a vertical mark or tilak, commonly worn by followers of Vishnu. In keeping with his iconography as the divine king, he is heavily bejeweled, wears a sacred thread that runs over his left shoulder and a long garland that comes down to his knees.

He stands flanked by two attendants, who may be his consorts Bhu and Shri, on a double lotus. The stele has a triangular top unlike earlier examples which were usually in the shape of a gently lobed arch. On either side of his crown are celestial garland bearers and musicians, the Vidyadharas and Kinnaras. A kirtimukha, or auspicious face of glory, is carved on the top centre of the arch.

The sculpture is typical of workmanship of the Pala dynasty of twelfth-century Bengal. The heart-shaped face with stylized arched eyebrows, long eyes that are slightly upturned at the ends, the broad nose, and the pursed smile are all characteristic.

A temple image of the Divine Couple: Shiva and Parvati 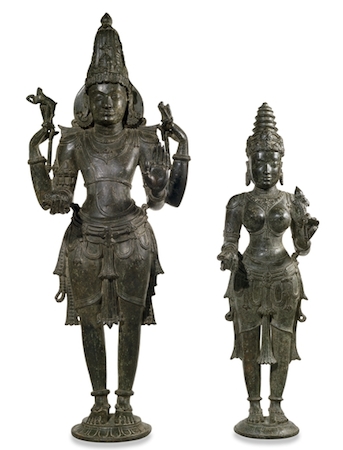 Shiva is a powerful Hindu deity. He has a female consort, like most of the gods, one of whose names is Parvati, “the daughter of the mountain.” Shiva and Parvati may appear as a loving couple sitting together in a form called Umamaheshvara. In this example two separate bronze images have been designed as a group. Both Shiva and Parvati wear elaborate jewelry. Shiva is the more powerful deity and so he is depicted with four arms and is the taller figure. In his hands he holds his weapon, the trident, a small deer and a fruit. His fourth hand is raised in reassurance (abhayamudra). Like other images of Shiva he wears two different earrings. Parvati holds a lotus in one hand and a round fruit in the other.

Bronze-casting in the eleventh century was highly developed in Tamil Nadu in the far south of India. However, these two bronzes are unusually large for the Deccan in the same period.

The erect frontal pose of these two figures contrasts with the relaxed, naturalistic posture of many images from Tamil Nadu of the Chola period.

It is often said that there is a trinity of Hindu gods: Brahma the creator, Vishnu the preserver and Shiva the destroyer. But while Vishnu and Shiva have followers and temples all over India, Brahma is not worshiped as a major deity. Brahma is the personified form of an indefinable and unknowable divine principle called by Hindus brahman. In the myth of Shiva as Lingodbhava, when Brahma searches for the top of the linga of fire, Brahma falsely claimed that he had found flowers on its summit, when in fact the Shiva linga was without end. For this lie he was punished by having no devotees. There are very few temples dedicated to Brahma alone in India. The only one of renown is at Pushkar, in Rajasthan.

Brahma can be recognized by his four heads, only three of which are visible in this sculpture. In two of his four hands he holds a water pot and a rosary. Brahma originally had five heads but Shiva, in a fit of rage, cut one off. Shiva as Bhairava is depicted as a wandering ascetic with Brahma’s fifth head stuck to his hand as a reminder of his crime. Brahma is commonly placed in a niche on the north side of Shaiva temples in Tamil Nadu together with sculptures of Dakshinamurti and Lingodbhava.