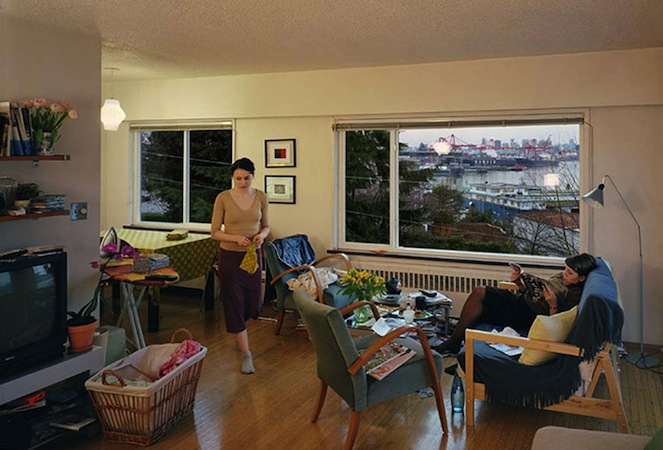 Jeff Wall’s A View from an Apartment is a large photographic transparency displayed on an electric light-box. Characteristic of Wall’s work, this format offers sharp figures in rich saturated colors, made even more intense by the lights that illuminate the image from behind. At almost 5 ½’ x 8’, the photograph approaches human scale. It’s as though the viewer could simply walk into the scene—or that the women in the image might walk out.

At first glance, this appears to be an ordinary genre scene. The large scale and striking detail draw the viewer closer to examine the image—the modern decor, the half-finished laundry, a cluttered coffee table. One woman walks forward while folding a cloth napkin; another pauses at a magazine page that’s momentarily caught her eye.  And, in the background, framed by the large picture window, is a panoramic view of Vancouver’s harbor just outside.

Wall was trained as a painter and art historian and became known in the 1970s alongside artists like Cindy Sherman and Sherrie Levine.  Influenced by conceptual art practices, as well as the pervasiveness of film and the mass media, this generation of artists turned to photography as a way to challenge our expectations about images and their meaning, and our assumption that the camera never lies.

A View from an Apartment initially evokes the larger-than-life feel of a film or an advertising billboard; but, in many ways, Wall’s photograph has more in common with painting.  Its monumental presentation and implicit narrative recall the academic tradition of history painting, where artists idealized their imagery in order to glorify individuals and important events of the past. Moreover, like a painter, Wall carefully composed the photograph to direct our gaze and frame key elements in the scene. The repeated diagonal lines of the television, the shelves above, and the basket below pull our eye to the standing woman. Her forward motion leads us to the sitting area, which, in turn, draws our attention up to the window and the view outside. 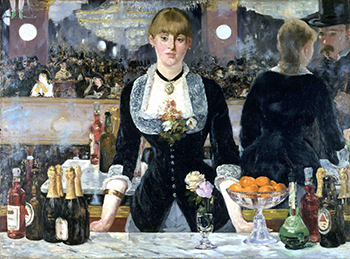 Wall’s work might also be compared to Realism of the 19th century. Like Édouard Manet, Wall depicts common scenes of modern life, thus elevating contemporary experience to the fine art status of the classical past. Realists like Manet challenged established artistic values by rejecting illusionistic painting techniques of the past. Wall issues a similar critique through his practice to deliberately stage his photographs. In A View from an Apartment, the artist gave his model a budget to furnish and live in the apartment, which he then photographed over several months. He used digital editing to combine multiple shots to achieve the final image. This creative process forces us to question the photograph’s value as an accurate record of the scene, and effectively demonstrates the artifice inherent to established traditions of art.

For all of Wall’s careful planning of the interior, the titular view of the harbor most distinguishes A View from an Apartment. Framed by the window, the harbor scene contrasts dramatically to the mundanity of life inside. This picture within a picture forces us to examine fundamental questions about art, its ability to represent the world around us, and our own relationship to those surroundings.

Illusionism in traditional art teaches that a painting is like a window on the world. The picture plane dissolves to reveal a distant expanse before us. But, in Wall’s work, the photographic image denies such illusionism by presenting an actual landscape, mechanically captured by the artist’s camera. It also heightens spatial ambiguity in the work. Here the photograph’s planar surface does not dissolve; rather the window is clearly real, evidenced by light reflected from lamps inside the apartment. The transparent window paradoxically calls attention to the solid apartment wall that separates the figures from the outside world, a barrier underscored by the women’s obliviousness to the vista the viewer enjoys while standing before the photograph. 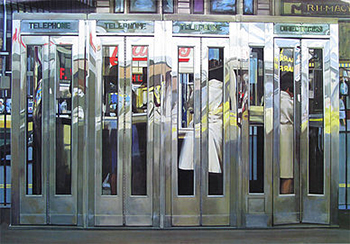 Wall’s use of the apartment view to create a discourse on art’s illusionism finds a place within this important recurring theme in art history. Painters, from Diego Velasquez in the 17th century and Henri Matisse in the 20th century raised similar questions by revealing the distance between reality and their representations of the real. In the 1970s, photorealists like Richard Estes drew on photographic images to highlight the ambiguity and formal play found in representational painting. Wall contributes to this on-going tradition through his references to modern cinema, mass advertising, and the role of photography in popular culture. His work reminds us to think twice about the images we see everyday. In the age of Photoshop, Instagram, and digital proliferation, what is real, and what is not, seems always to be in play.

This photograph at the Tate

Roberta Smith review of “Jeff Wall: In His Own Words” exhibition at The Museum of Modern Art, The New York Times

Site for “Jeff Wall: In His Own Words” exhibition at The Museum of Modern Art

Cite this page as: Dr. Virginia B. Spivey, "Jeff Wall, A View from an Apartment," in Smarthistory, August 9, 2015, accessed February 8, 2023, https://smarthistory.org/jeff-wall-a-view-from-an-apartment/.