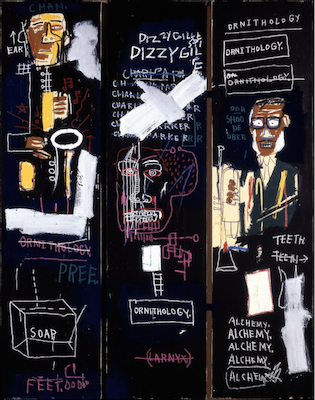 Jean-Michel Basquiat’s 1983 painting Horn Players shows us all the main stylistic features we have come to expect from this renowned American artist. In addition to half-length portraits on the left and right panels of this triptych (a painting consisting of three joined panels), the artist has included several drawings and words—many of which Basquiat drew and then crossed out. On each panel we also notice large swaths of white paint, which seem to simultaneously highlight the black background and obscure the drawings and/or words beneath. Most notable perhaps is the preponderance of repeated words like “DIZZY,” “ORNITHOLOGY,” “PREE” and “TEETH” that the artist has scattered across all three panels of this work.

Despite the seeming disorder of the composition, however, it is clear that the main subjects of Horn Players are two famous jazz musicians—the saxophonist Charlie Parker and the trumpeter Dizzy Gillespie, who Basquiat has depicted in both linguistic and visual portraits. On the left of the canvas, the artist has drawn the figure of Parker, holding his saxophone which emits several hot pink musical notes and distorted waves of sound. We see Dizzy Gillespie in the right panel, who holds a silent instrument alongside his torso. The words “DOH SHOO DE OBEE” that float to the left of the figure’s head call to mind the scat (wordless improvisational) singing Gillespie often performed onstage.

Many of the words Basquiat has written on the canvas relate specifically to Charlie Parker, but they make sense only for those viewers with some knowledge of the musician’s life. For example, the literal meaning of “ORNITHOLOGY” is “the study of birds,” but this is also the title of a famous composition by Parker, who named the tune (first recorded in 1946) in reference to his own nickname “Bird.” The words “PREE” and “CHAN” that we see written above and below the saxophonist’s portrait refer to Parker’s infant daughter and common-law wife, respectively. 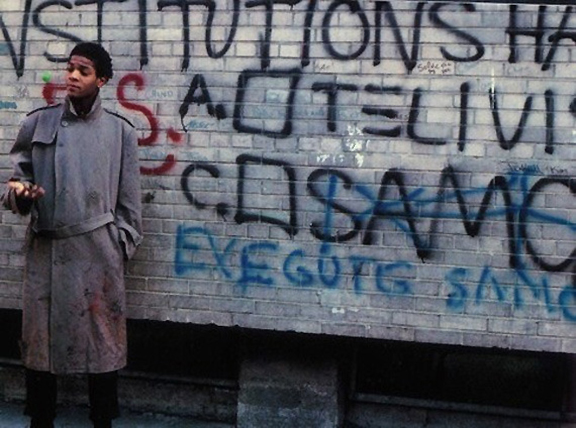 This kind of wordplay is a characteristic that extends across most of Jean-Michel Basquiat’s work. One of the most recognizable features of the artist’s more than 2000 paintings and drawings is the overwhelming abundance of written words on the canvas. The art historian Robert Farris Thompson once declared: “It’s as if he were dripping letters.” Before his success as a painter, Basquiat was famous for writing on the walls of lower Manhattan as a teenager when he and a high school friend, Al Diaz, left cryptic messages in spray paint under the name “SAMO” (an acronym for “Same Old Shit”) from 1977 until 1979.

As SAMO, Basquiat and Diaz wrote maxims, jokes, and prophecies in marker and spray paint on subway trains throughout New York City (particularly the “D” train, which ran between downtown Manhattan and Basquiat’s home in Brooklyn), as well as on the walls and sidewalks in the SoHo and Tribeca neighborhoods. Many of the locations where SAMO writings were to be found were in close proximity to prominent art galleries. Combined with these strategic positions, phrases like “SAMO AS AN END TO PLAYING ART” or “SAMO FOR THE SO-CALLED AVANT-GARDE” presented the “SAMO” persona as outside the commercial art world and critical of it. In fact, even after relinquishing the SAMO persona and emerging to the art world as Jean-Michel Basquiat, the artist remained an outsider to the mainstream art world, despite his meteoric rise on the art auction block.

Basquiat went from SAMO”to commercial success at warp speed in the early 1980s. He first exhibited (still under the name SAMO) at the Times Square Show—an exhibition in June 1980 that marked the genesis of the eighties art movement. He was later invited to exhibit in New York/New Wave, a group show of sixteen hundred works by 119 artists that opened at P.S. 1 on Valentine’s Day. The show was affectionately called “The Armory Show” of the 1980s (the original Armory Show in 1913 was the first large exhibition of international modern art in America).

Almost immediately afterward, the young Basquiat (at this point just 20 years old) was invited to exhibit in his first solo show in Modena, Italy. The gallerist Annina Nosei, who showed more established artists like David Salle and Richard Prince, agreed to represent Basquiat, who had a one-man show at her gallery the next year. That same year, Basquiat had exhibitions in Los Angeles, Zurich, Rome, and Rotterdam and became the youngest artist invited to participate in Documenta 7 (an international contemporary art exhibition that takes place every five years). By 1983 the average sale price of Basquiat’s work had increased by 600 percent, and his popularity (both in the auction house and in popular culture) persists even today. You can buy his images on shirts and hats from popular retail outlets and his large paintings sell at auction for more than $20 million.

Based on his meteoric success, critics referred to Jean-Michel Basquiat as “the black Picasso.” The nickname was complicated for Basquiat, who never embraced it, but was nevertheless concerned with his own place within art history. He often relied on textbooks and other sources for his visual material; most biographies of the artist note his reliance on the medical textbook Gray’s Anatomy (a gift from the artist’s mother when Basquiat was hospitalized as a child) for the anatomical drawings and references we see on many of his surfaces. Basquiat also appropriated the work of Leonardo, Edouard Manet, and Pablo Picasso into his own compositions. These appropriations were in part an homage to the great painters Basquiat admired, but they also were a way for Basquiat to rewrite art history and insert himself into the canon. 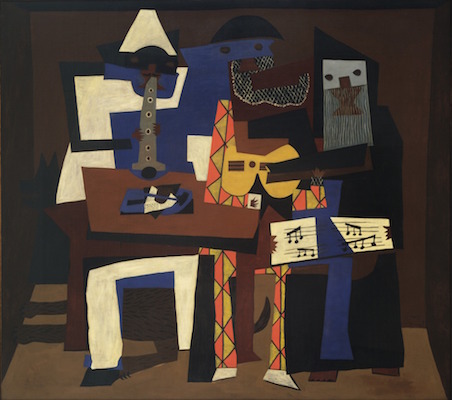 Looking again at Horn Players, for example, reveals several connections to Picasso’s Three Musicians. Basquiat’s use of the triptych format—a popular device for the artist in this period—echoes the triple subjects of the Picasso image. The figure of Parker in Basquiat’s composition is also reproduced in the same position as the standing figure (playing the clarinet) in Picasso’s work. 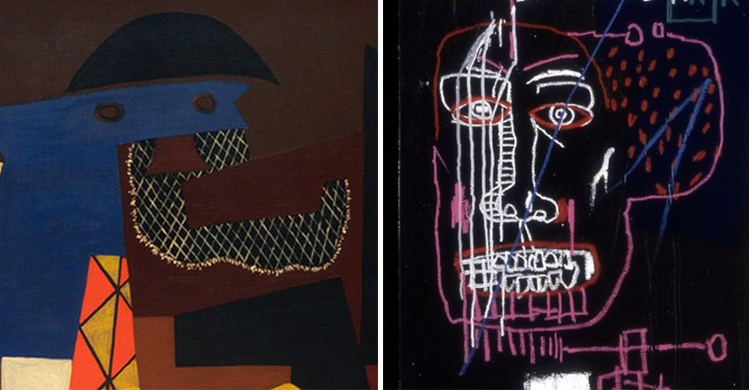 The central panel of Basquiat’s canvas, which does not show a portrait of an identifiable musician like the other two panels, but instead a distorted head with roughly outlined features, suddenly comes into focus via its comparison with Three Musicians. Here Picasso references in paint, his earlier experiments with paper collage especially in rendering the face and head of his central figure, whose jawline dramatically extends beyond what is anatomically possible to create an abstract, bulbous shape. Basquiat’s central figure bears a similar protrusion—this time from the top of the head—which he fills in with hatch marks that are suggestive of the patterning of Picasso’s “collaged” paper. Once again, Basquiat seems to be speaking in code. This time, we are being asked not only to draw upon our knowledge of music history but of modern painting to fully understand his work.

Musicians were a popular subject for Basquiat, who himself played briefly in a noise band called Gray—likely a reference to the Gray’s Anatomy textbook. Jazz musicians began to appear in the artist’s paintings around 1982; references to jazz musicians or recordings appear in more than thirty large-format paintings and twenty works on paper. Charlie Parker and Dizzy Gillespie are the two musicians who appear most frequently, both as figures in the paintings and through linguistic references to their work. The artist painted canvases with figures playing the trumpet, the saxophone, and the drums. He also devoted several canvases to replicating the labels of jazz records or the discographies of musicians.

Many scholars have connected Basquiat’s interest in jazz to a larger investment in African American popular culture (for example, he also painted famous African American athletes) but an alternative explanation is that the young Basquiat looked to jazz music for inspiration and for instruction, much in the same way that he looked to the modern masters of painting. Parker, Gillespie, and the other musicians of the bebop era infamously appropriated both the harmonic structures of jazz standards, using them as a structure for their own songs, and repeated similar note patterns across several improvisations. Basquiat used similar techniques of appropriation throughout his career as a painter.