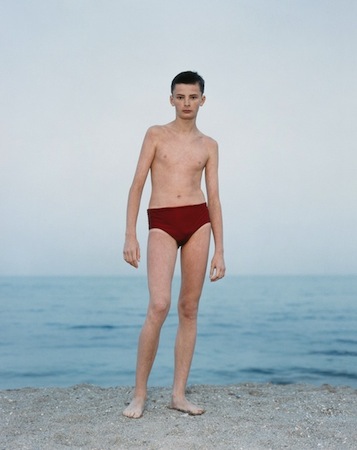 What makes a portrait so compelling? Historically, portraits were reserved for the elite and wealthy, but with the advent of the camera in 1839 portraiture became increasingly democratized and accessible across social classes. Today, we all appear in numerous portraits: family photos, formal school pictures, even the increasingly common “selfie” created for social networks.  In an age of ubiquitous portraiture, what makes Dutch artist Rineke Dijkstra’s photograph of a teenage boy standing on a Ukrainian shoreline so evocative?

Dijkstra’s photograph Odessa, Ukraine, August 4, 1993 comes from the series Beaches, which was created between 1992 and 1998 across locations as diverse as Poland, Great Britain, South Carolina, Belgium, Coney Island, and the Ukraine. Typically working in series, Dijkstra prefers single subjects documented over time or multiple subjects recorded after moments of intensity, such as new mothers in the days after giving birth or Portuguese bullfighters immediately after a match. Working in series necessitates revealing through comparison.

In Beaches, her earliest series, Dijkstra was interested not just in capturing young men and women on the cusp of adulthood, but the unexpected social and cultural nuances that became apparent by portraying teenagers from different parts of the world:

“I think that in Poland [the subjects’ bathing suits] reminded me of the ‘60s, they have twenty-year old bathing suits and no one cares…They were very easygoing. The Americans had very fancy bathing costumes and the poses were more self-conscious.  One girl was really holding her belly in and her mother was behind her yelling ‘You’re too fat.’ She was so unhappy.”[1]

These powerful emotional responses are expressed through intricately captured details across the series Beaches and in each of the individual portraits. Dijkstra draws us in with the details captured using a flash (even in sunlight), from the type of swimming garment (full length swimsuit, speedo, underwear, cut-off jeans) to the expressions on the subjects’ faces (cool, pensive, inquisitive).

Standing on a beach

Dijkstra’s process entailed asking unknown adolescents to pose for her at the shore, and while she set up lighting and prepared her camera on a tripod, her subjects assumed their own stance.[2] As with each photograph in this series, the anonymous boy’s vertical body is set against the rigid horizontals of the shore and horizon. He stands in contrapposto, causing his angular shoulders to protrude up and out, and his gangly frame is sunken in at the torso.

The careful lighting, which one writer has described as “clinical,” starkly contrasts his pale skin against the cool tones of sky, water, and sand. The overwhelming blues and greys are augmented by the boy’s dark red trunks that extend to the sharp bend of his pelvis, appearing unnaturally flattened as if pasted on the image afterward. In contrast to his young body, his mature face stares outward unabashedly, which is daunting when seen in its six foot tall printed form.

Behind his emotionless expression is a self-awareness that appears mature, relaxed, and casual.  Dijkstra often strives to capture self-consciousness: “People think that they present themselves one way,” the photographer once stated, “but they cannot help but show something else as well. It’s impossible to have everything under control.”[3] Dijkstra bridges the difficult gulf between self-presentation and photographic representation by allowing the subjects to assume their own pose. Despite choosing nearly identical settings for each photographs in the series, Dijkstra’s portraits transcend simple visual documentation and become revelatory images of the awkwardness and transitory nature of puberty.

Because her title emphasizes location and date but excludes the name, Dijkstra intends for her subject to remain unknown. This insistence on anonymity and working in series is suggestive of a typology, or a system of classification based on type. As Allen Sekula has discussed, photographic typologies became increasingly common at the end of the nineteenth century, linked to the popular pseudo-sciences of physiognomy and phrenology.[4] Another photographer, the German August Sander, is important here. Dijkstra has often stated that Sander was a primary influence on her work and methodology; moreover, he also produced typological photographs. 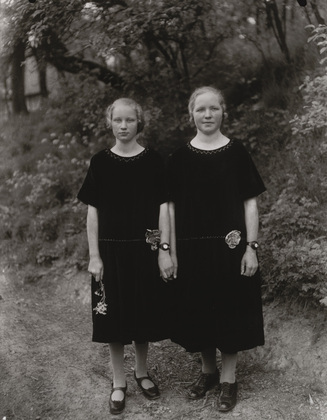 From 1910 to the early 1950s, Sander encyclopedically documented German people, emphasizing lifestyle and profession as an extensive photographic typology of Menschen des 20. Jahrhunderts (People of the Twentieth Century). Although his visual approach was modified over time, Sander’s photographs emphasized clothing, tools, ephemera, and setting. In Sander’s 1927 photograph Sisters, the simple folk dresses of the young girls standing on a forest path suggest their lineage with traditional German customs and love of nature (though offset somewhat by their wristwatches!). Sander likely posed and carefully composed his portraits, evident by the visual alignment of the waistline embroidery on the sisters’ dresses.

While the influence of Sander on Dijkstra’s own work is important, there are some key differences, most notably her method of unifying the composition with the shoreline. This, along with allowing her subjects to settle into their own stance, does not classify as much as expose by focusing less on extraneous details and more on the expressions and bodies of her subjects.

One interesting byproduct of Dijkstra’s method of allowing her portrait subjects to be conscious of the pose they strike is that at times her figures end up in stances that are remarkably similar to famous works of art. In one Beaches photograph from Poland, a young girl unconsciously mirrors a pose similar to that of Botticelli’s Birth of Venus. In the Odessa photograph, the young man’s contrapposto and nearly nude figure evokes the idealized youthful males of Early Classical Greek statuary.

These references, which Dijkstra states are unintended by her, are quite evocative, and suggest an ingrained, resonant sense of how late twentieth-century adolescents wish themselves to be portrayed when a Dutch photographer asks them to pose for her while spending their day at the beach.

Dijkstra’s work at the Saatchi Gallery

August Sander on The Museum of Modern Art website