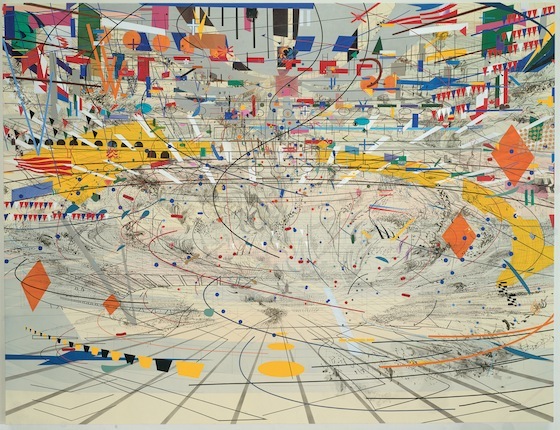 When looking at Stadia II, first try to isolate the black lines from the rest of the composition. Does this centrifugal structure remind you of a sports arena, an amphitheater or opera house? Perhaps a political chamber? It could denote all of these, broadly invoking our experiences as individuals and collective bodies in such spaces. The built environment, for Mehretu, provides a setting in which people can gather, protest, pray, and riot in mass numbers.

Now, try to imagine yourself in a large stadium, at an important athletic championship such as the FIFA World Cup or the Olympics. How do the crowds behave? What types of phrases or slogans are they shouting, and at what volume? Think about the matching clothing and the painted faces of spectators wearing team colors, or the flags and banners that they wave over their heads.

In her monumental paintings, murals, and works on paper, Julie Mehretu overlays architectural plans, diagrams, and maps of the urban environment with abstract forms and personal notations. The resulting compositions convey the energy and chaos of today’s globalized world. Stadia II is part of a triptych of works created in 2004, and explores themes such as nationalism and revolution as they occur in the worlds of art, sports, and contemporary politics.

Gaze back into the painting and observe the various shards of color floating over the work’s architectural skeleton. The scene, however abstract, could easily represent our visualization of the sports arena. Small circles, dots, and hash marks float through the open space at the center of the composition, resembling the eruption of confetti that announces a winning team’s victory (or, alternately, that of a lucky political candidate on Election Day).

Notice the larger circles, triangles, blocks and parallelograms that float across the upper register. Far from arbitrary, these basic pictorial elements could comprise the designs of nearly any country’s national flag. The cluster of red and blue stripes, for instance, located along the top-right edge of the canvas, resemble the American flag, without necessarily resolving into a perfect match. We may also find corporate logos and religious symbols interspersed throughout; Mehretu is intentional in drawing analogies between these forms and the propagandistic ways in which they are often used.

Lastly, observe the painterly grey marks that seem to rise from the lower and central registers like plumes of smoke. Stadiums and capital buildings can represent triumph, pride and celebration, but they are also common targets for bombings and acts of terror, which are often motivated by a comparable degree of zealousness and ideological fervor.

Mehretu’s working process begins with the projection of maps and diagrams onto the work’s blank surface. From these, the artist makes traces and hash marks that eventually grow into characters and communities. The first layer is coated with an acrylic-and-silica mixture that seals the drawing under a transparent ground. After drying, this ground is itself overlaid with more figures and photographs that are again assimilated into the composition.

The artist describes her final product as containing a “stratified, tectonic geology (…) with the characters themselves buried—as if they were fossils.”1 This distinct sense of temporality serves as a metaphor for history, memory, and the legacies of past cultural epochs that still influence contemporary life.

While nationalism, sports and global politics are key points of entry into the work, Mehretu also considers art historical precedents for these themes.

Take a look at the orange diamonds at the side edges, the black quadrilaterals interspersed above, or the dynamic red “X” found at the top edge. These lines and shapes are unmistakable references to the Russian constructivist and Bauhaus movements of the early twentieth century, and to artists such as Alexandr Rodchenko, Kasmir Malevich, El Lissitzky, and Wassily Kandinsky. These artists conceived of pure abstraction as a way to wipe clean the slate of history and to promote universalism and collectivity in art, politics and culture.

Mehretu has long explored the use of abstraction in service of revolution and utopian politics throughout the history of Modernist art, “I am (…) interested in what Kandinsky referred to in ‘The Great Utopia’ when he talked about the inevitable implosion and/or explosion of our constructed spaces out of the sheer necessity of agency. So, for me, the coliseum, the amphitheater, and the stadium are perfect metaphoric constructed spaces.”2  These can represent both the organized sterility of institutions and the “chaos, violence, and disorder” of revolution and mass gathering. 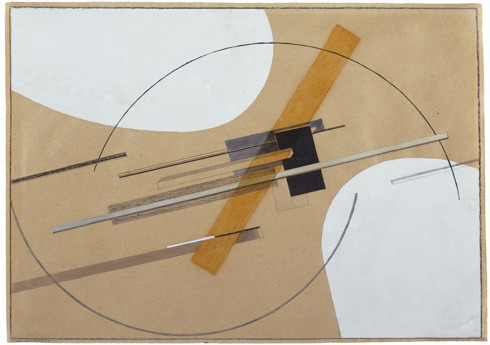 Because Mehretu builds her piece from multiple layers of figure and ground alike, the colors, shapes, and planar forms in Stadia II seem to be suspended between surfaces, and are often caught in a swirling motion around the axis of her compositions. The dynamism of the work makes reference to traffic patterns, wind and water currents, migrations, border crossings and travel.

Depicting patterns of movement, Mehretu emphasizes, on one hand, the militarization of bodies moving within and between national (or digital) spaces, and acknowledges the increasing speeds at which the world seems to be moving. Yet, while her compositions might be vertiginous and disorienting at times, we are given a chance to reflect on the potential and importance of such interconnectedness.