Old Man’s Cloth hangs like a large tapestry, but when we look closer, it’s easy to become captivated by the small metal fragments that comprise the work in hundreds. Arranged within a shifting grid of stripes and blocks of color, the components form their own internal maps across the surface, melding into vertical gold bands, interlocking black and silver rows, or a deviant red piece floating in a field of black. While Old Man’s Cloth would have been laid flat during its construction, it is contorted and manipulated during installation, so that the individual metal pieces can catch the light from every angle. This brilliant visual effect makes its humble origins all the more impressive. 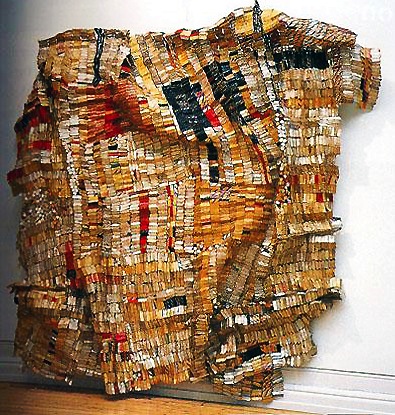 The Medium or the Message?

Old Man’s Cloth has been constructed from flattened liquor bottle labels that the artist collects near his home in Southern Nigeria. While critics often write about Anatsui’s metal wall hangings using the language of textiles, the labels and bottle caps are typically fastened together with copper wire and attached corner-to-corner. As such, the issue of medium is one of the first to inspire debate amongst viewers—are the wall hangings two-dimensional or three-dimensional?  Are they sculptures, even as they hang against the wall like paintings?  Are they individual works or immersive installations? Lastly, are they “fine art” or simply an innovative form of “craft”?

Purposefully disregarding the limited categories imposed by Western art history, Anatsui’s practice emerges from a more expanded understanding of what art can be that stems from both the radical practices of the late-1960s, and from a vantage point outside of the Western tradition completely. As scholar Susan Vogel has explained, “such categories did not exist in classic African traditions, which made no distinction between art and craft, high art and low.” 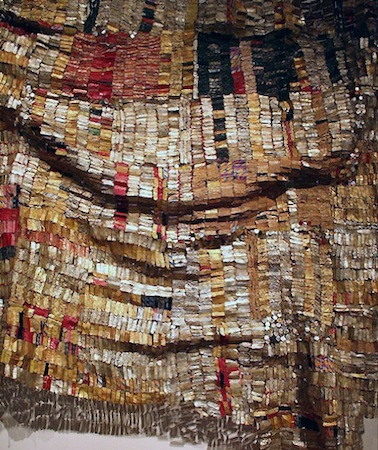 The luminescent gold colors also recall the colonial past of Anatsui’s home country—modern Ghana was previously a British colony called The Gold Coast until its independence in 1957. The fluid movements of the work’s surface remind us of the waters of the Atlantic Ocean, which carried slave-ships and traders between Africa, Europe and the New World. By bestowing his works with titles such as Man’s Cloth and Woman’s Cloth, Anatsui also makes reference to the significance of textiles in African societies, and their own historical role in trade networks.

El Anatsui was born in Ghana in 1944, and was trained in an academic European curriculum. In 1964, when he began his studies, many parts of Africa were experiencing a cultural renaissance associated with decolonization movements. Anatsui himself joined the unofficial “Sankofa” movement, which was invested in unearthing and reclaiming Africa’s rich indigenous traditions and assimilating these with the European-influenced aspects of society. His earliest works, for example, included a series of wooden market trays into which he burned designs inspired by African graphic systems and adinkra motifs (symbols widely used by the Akan people of Ghana).

In 1975, Anatsui joined the faculty at the University of Nigeria, Nsukka.  Nsukka was a vibrant creative capital for African artists and writers in the 1970s, many of whom spearheaded the Zaria Rebellion in the early 1960s and revived the traditional art form of uli wall and body painting in their contemporary works. 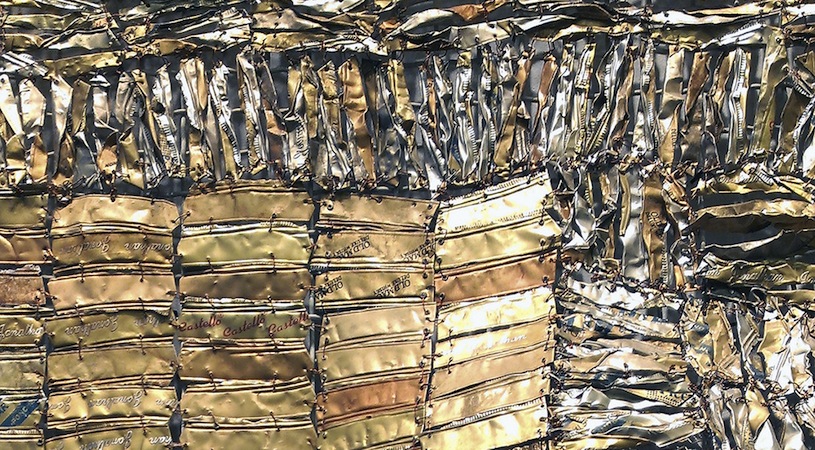 When two of Anatsui’s metal wall hangings appeared in the 2007 Venice Biennale, they were lauded by the public and swiftly cemented his place as a leading international contemporary artist. He had, in fact, already shown in Venice almost two decades earlier in 1990, when he participated in a small exhibition surveying contemporary African art. During the time that lapsed between the two exhibitions, the art world became more receptive to artists outside of its Western centers, and by 2007, Anatsui could exhibit not only as a representative of the continent, but as an individual artist whose work was significant in its own right.

As such, his work provides an excellent opportunity for discussion about the relationships between artists at the center and at the periphery, and between the West and the Global South. The Metropolitan Museum of Art, for instance, has now acquired two of Anatsui’s metal wall hangings, but they are owned by two different curatorial departments: the Arts of Africa, Oceania and the Americas, and Modern and Contemporary Art. Both were recently on view at the same time, but in separate galleries. Visitors, students, and art historians should continue to ask themselves which designation seems more appropriate, and for what reasons. Should we understand his art as a product of its place, its time, or both? What do we see in Anatsui’s work when it is placed among African masks and ritual objects, and how do our impressions change when this work is placed beside contemporary art from around the world?

There are no correct answers to these questions, but they are indicative of the changes that have taken place both in the art world, and in today’s increasingly connected society at large.