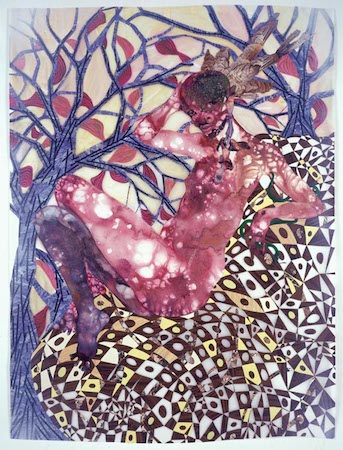 Using the medium of collage, the artist Wangechi Mutu creates new worlds that re-imagine culture through the realm of fantasy. Mutu was born in Nairobi, Kenya and educated in Europe and the United States. Her art is global in nature and she clearly relishes complicating both Western and non-Western cultural norms, questioning how we see gender, sexuality, and even cultural identity.

Wangechi Mutu’s artistic practice includes video, installation, sculpture, and mixed-media collage. One of her recurrent themes concerns the violence of colonial domination in Africa (particularly in her native Kenya). Her images incorporate the female body, specifically an imagined “African” body, subjected to sexism and racism on a global scale.

Sources for Mutu’s collages include fragments from fashion magazines, pornography, medical literature or even popular magazines such as National Geographic. Inspiration for her collages can be traced to the early photomontages of the German Dada artist Hannah Höch (below left) and the American artist Romare Bearden (below right). Mutu appreciates Bearden’s use of collage—how it emphasizes community and the African American traditions found in jazz, while the spliced images in Höch’s photomontages reflect Mutu’s interest in disrupting societal convention in art. Mutu creates a space for exploring an informed consciousness about being “African” and female that incorporate these artists’ techniques yet develops a new visual vocabulary. 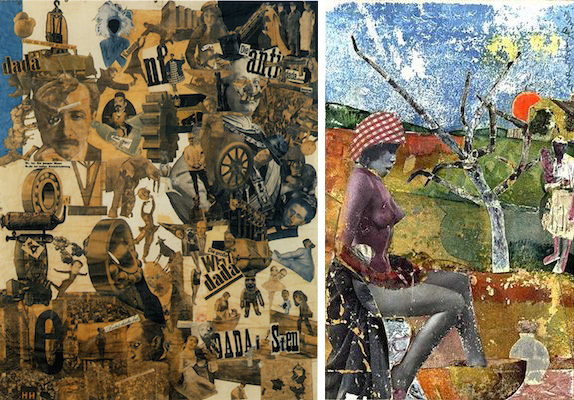 Preying Mantra centers on female subjectivity, exoticism and the notion of hybridity—both in concept and imagery. Hybridity is a concept often used in postcolonial studies. It describes how mixing the cultures of colonized and the colonizer can produce a third space for newer and often disruptive understanding of cultural identity. Colonialism in Africa, which began in earnest in the nineteenth century, violently wrested power from Africans for the benefit of European nations through the enforcement of strict military and administrative controls. As colonialism waned during the mid-twentieth century, other social and political issues emerged. Mutu’s work was shaped by this complex history and by issues such as the rights of women that came to the fore at the end of the century. 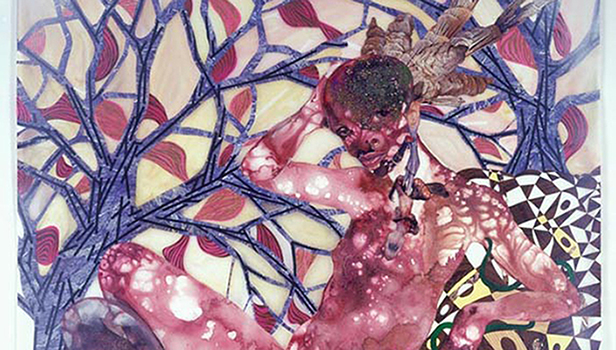 In Mutu’s Preying Mantra, a female creature appears to recline on a geometrically patterned blanket that is sprawled between trees or perhaps on a tree branch. The blanket resembles a Kuba cloth (traditional fabric created by the Kuba people). Legs tightly crossed in front of her, the figure stares suggestively at the viewer with her right hand positioned behind her head, which is surmounted by a cone-like crown. Her relaxed posture is camouflaged by her skin, which appears dappled by sunlight and which mirrors the colors of the tree’s leaves. Like the female body, the tree is emblematic of the creation myths found in many cultures, including Mutu’s Kikuyu ancestors in Kenya. In her left hand, the figure holds a green serpent that rests on the blanket which fills much of the scene. The serpent, linked with the role of Eve in the biblical creation narrative, provides yet another cultural source for Mutu’s protagonist. The tree envelops the female figure, reinforcing links between history and fiction, African and Non-African cultural myths as well as natural versus unnatural phenomena. 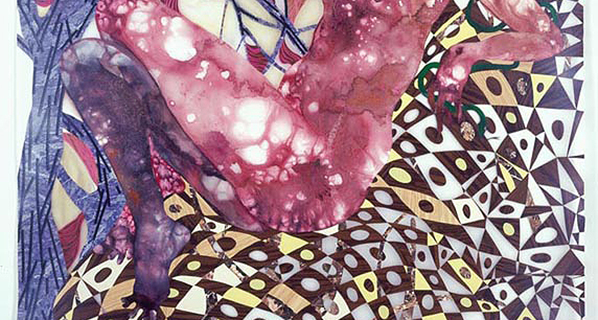 The title Preying Mantra, recalls the praying mantis—an insect that resembles the protagonist in Mutu’s collage, with her prominently bent legs. As a carnivorous insect, praying mantises camouflage themselves to match their environment, snaring their prey with their enormous legs. During mating, the female can become a sexual cannibal—eating her submissive mate. Such imagery and its association with natural phenomena creates a primal sensibility. Despite this reference to a real praying mantis, Mutu’s “preying mantra” is also vulnerable to our gaze, suggesting that the figure may be a victim that is “preyed” upon by “mantras.” Mutu creates a natural, even primitive, fictional environment that entices and disturbs us even as she invites us to explore stereotypes about the African female body as explicitly sexual, dangerous, and aesthetically deformed in relation to Western standards. Given that elements of the collage are assembled from sociocultural documents found in popular literature from the West, the figure may be preying on the viewer’s own fears and desires.

This work at the Brooklyn Museum

Wangechi Mutu + Santigold – The End of eating Everything – Nasher Museum at Duke, animated video by Mutu

Wangechi Mutu: A Fantastic Journey (video from the Brooklyn Museum)