The Puerto Rico born artist Pepón Osorio trained as a sociologist and became a social worker in the South Bronx. His work is inspired by each of these experiences and is rooted in the spaces, experiences, and people of American Latino culture, particularly Nuyorican communities (Nuyorican refers to the Puerto Rican diaspora living in New York, especially New York City). Osorio’s large-scale installations are meant for a local audience, yet they have also been exhibited in mainstream cultural institutions (though after the 1993 Whitney Biennial, Osorio vowed to show his work first within the community, and then elsewhere). 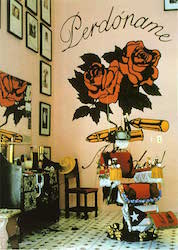 Puerto Rico is a United States territory. Its residents are United States citizens and carry an American passport, yet they cannot vote in presidential elections or have representatives voting for their interests in Washington. This sense of marginality is further complicated when one considers that Nuyoricans often retain a distinct sense of cultural pride that is informed by their dual American and Puerto Rican identities.

Having lived both experiences—that of a Puerto Rican and Nuyorican—Osorio is best known for large-scale installations that address street life, cultural clashes, and the rites of passage experienced by Puerto Ricans in the United States. Outside the traditional museum setting, and commissioned by Real Art Ways (RAW) from Hartford, Connecticut, En la barberia no se llora (No Crying Allowed in the Babershop) is a mixed-media installation located in the Puerto Rican community of Park Street in Hartford. Created in collaboration with local residents, Osorio engaged the public through conversation, workshops, and artistic collaborations. The art itself is visually lavish—his installations have often been dubbed “Nuyorican Baroque” (a reference to the seventeenth-century style characterized by theatricality and opulence and found in both Europe and Latin America).

Inspired from his first haircut in Santurce, Puerto Rico, Osorio recreates the space of the barbershop as one that is intensely packed with “masculine” symbols like barber chairs, car seats, sports paraphernalia, depictions of sperm and a boy’s circumcision, phallic symbols, and male action figurines. Osorio boldly challenges the idea of masculinity, and particularly of machismo (a strong sense of masculine pride), in Latino communities. 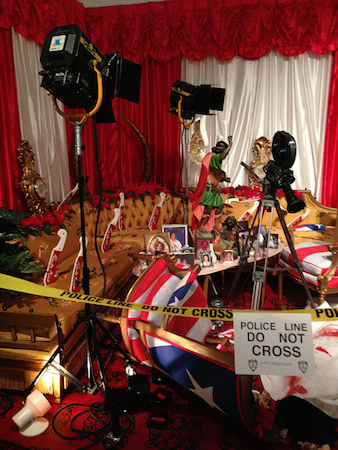 Detail of Pepón Osorio, The Scene of the Crime (Whose Crime?) installation at The New Museum, 1993 (photo: Hrag Vartanian, CC BY-ND 2.0)

One prominent aspect of En la barberia no se llora are the video installations featuring Latino men from Park Street in stereotypically “masculine” poses. The men vary in age. Osorio included older men from the retirement home, Casa del Elderly, presenting the issue of machismo as multi-generational and deeply ingrained in Nuyorican culture. As a foil to this construction, the artist also included videos of men crying, with the public reacting both in sympathy and disgust.

These same men then participated in workshops, in which they discussed how notions of masculinity had shaped their personal relationships as brothers, husbands, and fathers. Despite this participation of men, most of the visitors to the barbershop installation were, in fact, women.[2]

While En la barberia no se llora (No Crying Allowed in the Babershop) challenges definitions of masculinity, it also brings up—in a more subtle way—the relationship between machismo and homophobia, violence, and infidelity, and the ways in which popular culture, religion, and politics help craft these identities and issues.