The heavens often rain down the richest gifts on human beings, but sometimes they bestow with lavish abundance upon a single individual beauty, grace and ability, so that whatever he does, every action is so divine that he distances all other men, and clearly displays how his greatness is a gift of God and not an acquirement of human art. Men saw this in Leonardo. (Vasari, Lives of the Most Excellent Painters, Sculptors, and Architects)

Leonardo: From Florence to Milan

Leonardo was born illegitimate to a prominent Tuscan family of potters and notaries. He may have traveled from Vinci to Florence where his father worked for several powerful families including the Medici. At age seventeen, Leonardo reportedly apprenticed with the Florentine artist Verrocchio. Here, Leonardo gained an appreciation for the achievements of Giotto and Masaccio and in 1472 he joined the artists’ guild, Compagnia di San Luca. 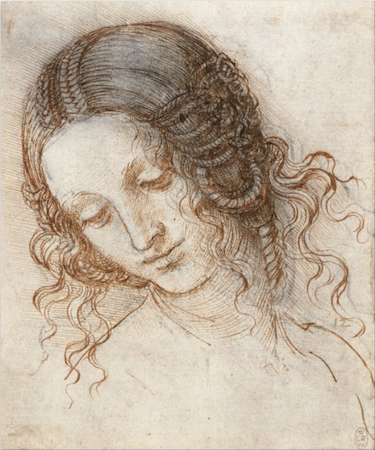 Because of his family’s ties, Leonardo benefited when Lorenzo de’ Medici (the Magnificent) ruled Florence. By 1478 Leonardo was completely independent of Verrocchio and may have then met the exiled Ludovico Sforza, the future Duke of Milan (Ludovico ruled as regent from 1481-94, before becoming Duke). In 1482, Leonardo arrived in Milan bearing a silver lyre (which he may have been able to play), a gift for Ludovico Sforza from the Florentine ruler, Lorenzo the Magnificent. Ludovico sought to transform Milan into a center of humanist learning to rival Florence. 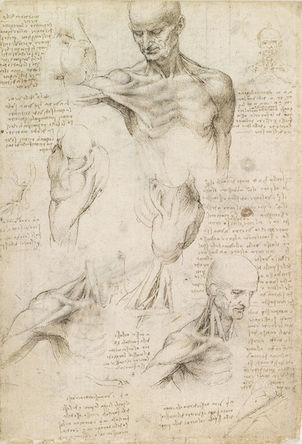 Leonardo flourished in this intellectual environment. He opened a studio, received numerous commissions, instructed students, and began to systematically record his scientific and artistic investigations in a series of notebooks. The archetypal “renaissance man,” Leonardo was an unrivaled painter, an accomplished architect, an engineer, cartographer, and scientist (he was particularly interested in biology and physics). He was influenced by a variety of ancient texts including Plato’s Timaeus, Ptolemy’s Cosmography, and Vitruvius’s On Architecture. Leonardo is credited with having assisted Luca Pacioli with his treatise, Divina Proportione (1509). Joining the practical and the theoretical, Leonardo designed numerous mechanical devices for battle, including a submarine, and even experimented with designs for flight.

In a now famous letter (likely written in the early 1480s), Leonardo listed his talents to the future Duke, focusing mostly on his abilities as a military engineer. The letter begins:

Having until now sufficiently studied and examined the experiments of all those who claim to be experts and inventors of war machines, and having found that their machines do not differ in the least from those ordinarily in use, I shall make so bold, without wanting to cause harm to anyone, as to address myself to Your Excellency to divulge my secrets to him, and offer to demonstrate to him, at his pleasure, all the things briefly enumerated below.

In ten short paragraphs, Leonardo enumerated the service he could perform—he said (among other things) that he could build bridges, tunnels, fortresses, and “make siege guns, mortars and other machines, of beautiful and practical shape, completely different from what is generally in use.” What might seem amazing to us is that it is not until the very last paragraph that Leonardo mentions art, and he mentions it so modestly! Here is what he wrote:

In time of peace, I believe I am capable of giving you as much satisfaction as anyone, whether it be in architecture, for the construction of public or private buildings, or in bringing water from one place to another. Item, I can sculpt in marble, bronze or terracotta; while in painting, my work is the equal of anyone’s.

Return to Florence, then France

In 1489, Leonardo secured a long awaited contract with Ludovico and was honored with the title, “The Florentine Apelles,” a reference to an ancient Greek painter revered for his great naturalism. Leonardo returned to Florence when Ludovico was deposed by the French King, Charles VII. While there, Leonardo would meet the Niccolò Machiavelli, author of The Prince and his future patron, François I (who ruled France from 1515-47). In 1516, after numerous invitations, Leonardo traveled to France and joined the royal court. Leonardo died on May 2, 1519 in the king’s chateau at Cloux.

Leonardo’s death and the changing status of the artist

Vasari, who wrote Lives of the Most Excellent Painters, Sculptors, and Architects (1550), had this to say about Leonardo’s death:

Finally, having grown old, he remained ill many months, and, feeling himself near to death, asked to have himself diligently informed of the teaching of the Catholic faith, and of the good way and holy Christian religion; and then, with many moans, he confessed and was penitent; and although he could not raise himself well on his feet, supporting himself on the arms of his friends and servants, he was pleased to take devoutly the most holy Sacrament, out of his bed. The King, who was wont often and lovingly to visit him, then came into the room; wherefore he, out of reverence, having raised himself to sit upon the bed, giving him an account of his sickness and the circumstances of it, showed withal how much he had offended God and mankind in not having worked at his art as he should have done. Thereupon he was seized by a paroxysm, the messenger of death; for which reason the King having risen and having taken his head, in order to assist him and show him favour, to then end that he might alleviate his pain, his spirit, which was divine, knowing that it could not have any greater honour, expired in the arms of the King.

This story is a good indication of the changing status of the artist—Leonardo, who spent the last years of his life in France working for King Francis I, was often visited by the King (remember that the artist was considered only a skilled artisan in the Middle Ages and for much of the Early Renaissance). In the High Renaissance, in contrast, we find that artists are considered intellectuals, and that they keep company with the highest levels of society. Quite a change! All of this has to do with Humanism in the Renaissance of course, and the growing recognition of the achievement of great individuals. Artists in the Early Renaissance insisted that they should be considered intellectuals because they worked with their minds as well as with their hands. They defended this position by pointing to the scientific tools that they used to make their work more naturalistic—the study of human anatomy, of mathematics and geometry, of linear perspective. These were clearly all intellectual pursuits. 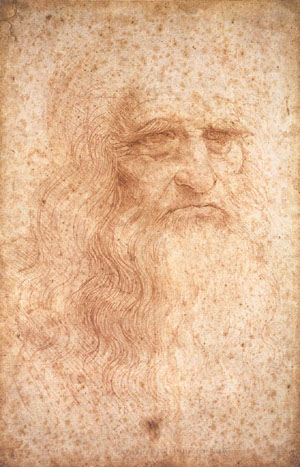 Look closely at this self-portrait. Isn’t it clear that Leonardo thought of himself as a thinker, a philosopher, an intellectual?

Ancient Greek physicians dissected cadavers. The early church’s rejection of the science of the classical world, along with the possibility of bodily resurrection led to prohibitions against dissection.  Both Leonardo and Michelangelo performed them—probably exclusively on the bodies of executed criminals.  According to his own count, Leonardo dissected 30 corpses during his lifetime.