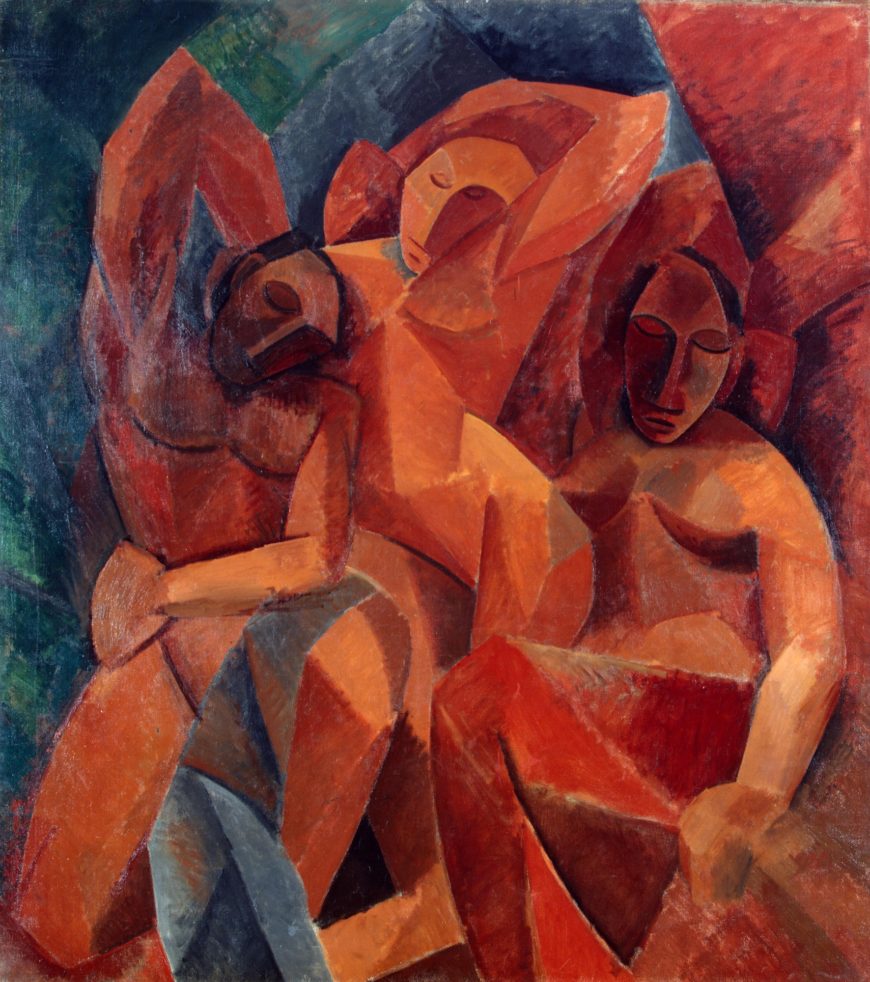 Pablo Picasso’s Three Women shows both a simplification of the human body to basic geometric forms and a novel approach to representing the figure in space. Rather than depicting the figures as independent forms in an open spatial environment, Picasso’s women form an interlocking whole, fitting together like pieces in a jigsaw puzzle.

The jutting hip of the central figure forms a common edge with the right-hand figure’s torso and breast, and the left-hand figure’s shoulder, arm, and head help to define the central figure’s right side. The figure on the right merges with the surrounding form, which is probably a curtain. On the left and at the top of the painting there is a greater distinction between the orange and red tones of the figures and the blues and greens of the background, but here too the relation of the figures’ physical forms to the surrounding space is ambiguous.

The geometrically schematized blue drapery covering part of the left-hand figure echoes the the color of the background, and both are divided into a pattern of diamonds and triangles. The effect of these repeated patterns and ambiguities is a painting that shifts oddly from conveying a strong sense of solid volumes and space, and a reminder that the painting is literally a flat surface covered in a pattern of painted geometric shapes. Three Women is closely related in subject and style to Les Demoiselles d’Avignon, painted the previous year, but in the later painting the women no longer confront the viewer. Their eyes are shut, and their faces are depicted using very similar simplified forms rather than the varied approaches used in Les Demoiselles. The women’s faces are, however, still mask-like and echo the forms of African masks that Picasso admired in the ethnographic museum in Paris. The mood of Three Women is also very different from Les Demoiselles; it is restrained and calm rather than expressive and aggressive. Three Women is focused on formal qualities — the creation of geometric patterns using the simplified shapes of the women’s bodies. This simplification of the bodies’ forms into basic shapes was also deeply indebted to the African sculptures Picasso had seen.

Les Demoiselles uses similar formal devices, but they are just one among many concerns. In the differences between the two paintings we can see Picasso turning away from using painting as a means of emotional expression and instead adopting a much more restrained approach directed to exploring ways of representing figures in space. This ultimately led to the revolution in representation known as Cubism.

Three Women also reflects Picasso’s encounter with Georges Braque’s recent L’Estaque landscapes in its random deployment of light and shadow. Although both painters used chiaroscuro to depict three-dimensional form, neither Braque’s Houses at l’Estaque nor Picasso’s Three Women reveals a consistent light source. This further confuses our perception of objects in space and is a key way the painting ignores the conventions of naturalistic representation established in the Renaissance.

The origin of “Cubism” Braque’s landscapes were the source of the term Cubism, which originated in an art critic’s passing comment. In a brief newspaper review, Louis Vauxcelles (who also “named” Fauvism by making a similarly casual comment) described Braque’s paintings of l’Estaque as reducing all forms to geometrical schemas and cubes. Vauxcelles’ description caught on, and the label “Cubism” became a catch-all term referring to a broad range of experimental modern painting and sculpture created in the early decades of the 20th century.

What broadly connects the disparate artworks labeled Cubist is not cubes, however, but the use of abstracted forms to represent objects in space. In many instances, Cubist forms can be described as geometric schemas (to use Vauxcelles’ other descriptive term for Braque’s 1908 landscapes). But more important than any particular stylistic feature is the way Cubism attempts to revolutionize the representation of the third dimension in art, arguably for the first time since the invention of linear perspective in the 1400s.

This project evolved and shifted over time, both formally and conceptually, and its main catalysts, Picasso and Braque, did not explain what they were doing or trying to achieve. Contemporary critics and subsequent art historians were left to figure out the significance of the new style, and while they all agreed it was interesting and important, they came to no ultimate consensus. Despite the many and varied interpretations, one thing that underlies Picasso and Braque’s Cubism is an inquiry into the problems of perceiving and representing volume and space in art.

By 1908, abandoning naturalistic conventions was far from new. What made Braque’s and Picasso’s early Cubist paintings distinctive was their emphasis on depicting three-dimensional forms and spatial relationships. Their early Cubist works build on Paul Cézanne’s exploration of the tensions between representing three-dimensional forms in space and the flatness of the painting’s surface. In Bathers Cézanne used a mosaic of brushstrokes to unify the painting and emphasize the flatness of its surface. Although the figures are situated in a landscape, there is minimal indication of spatial recession, and the background is a flat pattern of color that vaguely suggests trees and a cloudy sky.

As in Picasso’s Three Women, a piece of drapery on the left is painted the same color as the background sky and contributes to the painting’s lack of recession. Also like Picasso’s painting, the figures are simplified and arranged into tight-knit groups, a pyramid on the left and an oval on the right. In comparison to Cézanne’s painting, however, the figures in Three Women are more sculptural and massive, the space more compressed. Although primarily interested in the human figure, during this period Picasso followed Cézanne and Braque in painting landscapes as he extended his exploration of new strategies for representing three dimensional forms in space.

Houses on the Hill, Horta de Ebro is markedly more abstract than Cézanne’s Houses in Provence, but both paintings unify the forms of the landscape into a consistent surface pattern that renders spatial depth ambiguous. Cézanne’s surface pattern is created by a mosaic of identical parallel brushstrokes, while Picasso uses repeating patterns of geometric shapes; the diamond pattern of the sky is a prominent example.

The abstraction of Houses on the Hill, Horta de Ebro is more pronounced than that of Three Women, although many of the formal strategies are the same. The viewer is confronted with an array of advancing and receding geometric forms defined by sharply delineated edges and chiaroscuro shading. The light source is inconsistent, as is the vantage point; some of the barely identifiable houses are depicted from the side, while those next to them are shown from above. The overall effect suggests that the viewer, instead of being fixed solidly in place relative to the scene, is floating above and around it, combining views from multiple perspectives. This concept would become increasingly important to the understanding of Cubism, but it is only embryonic here.

Rather than being situated in clear relation to the land, the buildings are spread out as if on a sloped table top and appear to be sliding out of the canvas and into the viewer’s space. While the figures in Three Women are tightly interlocked and neatly contained with the limits of the canvas, the buildings in Houses on the Hill seem to teeter on the brink of losing their balance. Maintaining a precarious balance between representation and abstraction would preoccupy Picasso and Braque for the next six years.

A daring and dangerous pursuit

Braque’s and Picasso’s early Cubist paintings privileged three dimensional form over color and explored new but very ambiguous ways of representing forms in space. This approach was only the beginning of their Cubist adventure. Picasso described his relationship with Braque during the Cubist years 1908-1914 as being like two mountain climbers roped together.

The artists also referred to themselves as the American aviation pioneers, Wilbur and Orville Wright, indicating that they saw themselves as pursuing a daring and dangerous course. It would lead them away from the representation of solid three dimensional forms to the shadowy ambiguities of late Analytic Cubism and then to the collage techniques associated with Synthetic Cubism.

Watch a video about Georges Braque”s Houses at L’Estaque at the Kunstmuseum, Bern