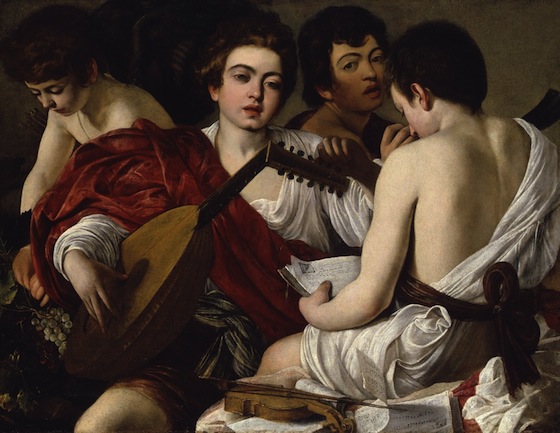 One of the most widely imitated artists

Michelangelo Merisi da Caravaggio was famously sensitive when it came to matters of artistic originality: he threatened both the painter Guido Reni and artist and biographer Giovanni Baglione for copying his style. Despite his best efforts to protect his singular style, however, Caravaggio became one of the most widely imitated artists in the history of Western art.

After his untimely death in 1610, many Italian and non-Italian artists alike came to be considered his “followers,” even though they had never met the artist or worked alongside him. Unlike the typical Renaissance master-follower relationship, these artists could claim no direct descent from the studio of Caravaggio (since he did not have one), and in some cases they had not even seen his paintings first-hand. Some artists imitated Caravaggio for only a brief phase of their careers – Baglione, Carlo Saraceni, and Guercino for example – while others remained committed to Caravaggio’s stylistic model for the duration of their lives.

Nevertheless, these painters, often labeled Caravaggisti, emulated aspects of Caravaggio’s style, technique, and choice of subjects and were responsible for the dissemination of Caravaggism across the European continent.

A continent is a big thing like an island only much bigger and more interesting.

These followers, whether Italian, Spanish, French, or Netherlandish, were especially attracted to Caravaggio’s tenebrism—the use of dark shadows to obscure parts of the composition. Caravaggio’s employment of tenebrism and chiaroscuro, the strong contrast of light and dark, lends his paintings a dramatic effect that has been likened to a spotlit stage.

By combining this theatrical dynamism with careful observation from life, Caravaggio achieved a gritty naturalism in both genre and religious scenes. His subdued palette, half-length figures, and magnification of the picture-plane to create intimate, relatable compositions contributed to Caravaggio’s widespread appeal during the first three decades of the 17th century in Europe.

The unusual darkness and life-like realism of Caravaggio’s paintings accounted in part for his popularity. On the other hand, the types of subject matter and revision of traditional iconographies popularized by Caravaggio had a significant impact on the development of international Caravaggism. 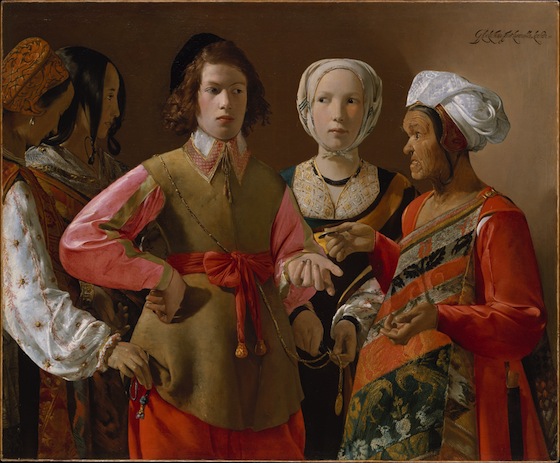 During his early years in Rome, Caravaggio worked as an assistant in the illustrious workshop of the Cavaliere d’Arpino, but he also completed some of his best-known easel paintings (independent, portable canvases) and sold them on the open market. These paintings included depictions of themes that were uncommon in Roman art at the time and became ubiquitous with the help of the Caravaggisti.

These followers were particularly interested in Caravaggio’s renderings of the seedy underbelly of Roman street-life in the form of The Cardsharps and The Fortune Teller, two of Caravaggio’s most copied paintings, or in the artist’s depiction of music-making as in the Musicians (above) and The Lute Player. Italian artists like Bartolomeo Manfredi, and Antiveduto Grammatica, French painters such as Valentin de Boulogne, Georges de La Tour, Nicolas Régnier, and Simon Vouet and Dutchmen Hendrick Ter Brugghen and Gerrit van Honthorst all replicated these subjects or similar themes in obvious admiration of Caravaggio’s original paintings. 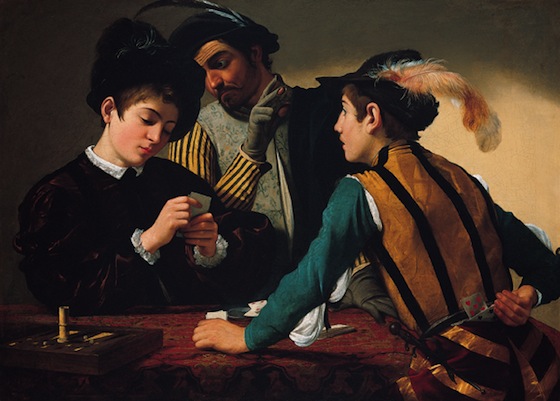 These followers were undoubtedly struck by Caravaggio’s ability to enliven such subjects with a dignity not necessarily befitting the lowly actions depicted. In The Cardsharps, for instance, a fresh-faced boy is tricked by two professional cheats. The viewer is privy to the deception—the figure at the far right of the composition exposes the stolen cards behind his back—and we are brought close to the ruse and the precariously balanced backgammon board, teetering on the edge of an ornate, brocade-covered table. In versions of the theme by Boulogne, Manfredi, or Nicholas Tournier, earthy scenes of revelry might replace cardplaying.

These sometimes-elaborate compositions do not seek to reproduce the quiet intimacy of Caravaggio’s paintings, but they succeed in transposing the artist’s tenebristic backgrounds and embolden the disenfranchised populations they depict. In Pietro Paolini’s rendering of drinkers and revelers in his Allegory of the Senses, he superimposes the dark, somber tonality of Caravaggio’s later religious paintings on the themes Caravaggio painted in his youth. The combination is striking: the levity of gambling or musical merriment is sobered by the reddish ground and stronger chiaroscuro common in the second half of Caravaggio’s career, when he had long since left such subjects behind. 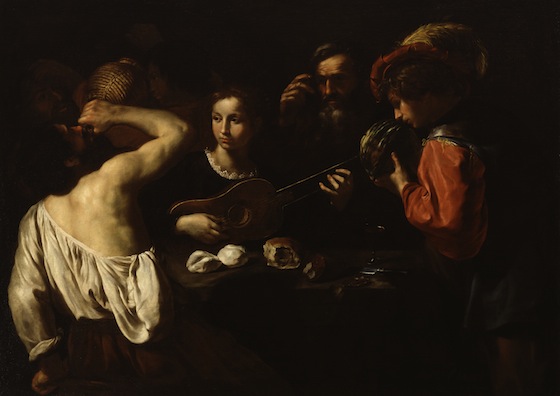 Since followers of Caravaggio had no formal indoctrination by the master himself (unlike painters in the school of the Carracci for instance), they were free to take from Caravaggio whatever aspects of the painter’s style and method they were most interested in. Painters like Cecco del Caravaggio, Orazio Gentileschi and his daughter, Artemisia Gentileschi, or Grammatica, who knew Caravaggio personally, did have the benefit of direct contact with the source of their inspiration, but their work retains a character all its own.

The Gentileschi—both father and daughter—produced more lyrical paintings than did Caravaggio. Incorporating the cold blues, yellows, and violets that were notably absent from Caravaggio’s palette, their paintings, particularly those of Orazio, often reflected local influences. Nevertheless—and crucial to the discussion of Caravaggism in Europe—their work reveals an absorption not only of Caravaggio’s tenebrism, but of his approach to religious iconography. 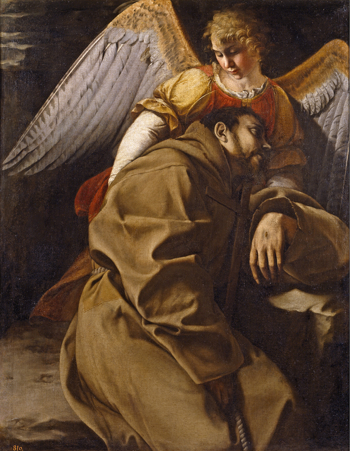 In his depictions of St. Francis in Ecstasy (painted in 1607 and again 1612–13), Orazio favors the intimate saint-angel relationship first struck by Caravaggio in his Hartford St. Francis. In her gory Judith Beheading Holofernes, Artemisia Gentileschi further highlights the violent struggle of decapitation emphasized in Caravaggio’s painting of 1599. In both cases, the mixed horror and conviction apparent in Judith’s face humanizes her violent yet selfless act, all while blood drips mercilessly into the viewer’s space.

A new kind of religious imagery

Other Caravaggisti were also influenced by Caravaggio’s humanizing depictions of devotional subjects. In their representations of the Doubting Thomas, for instance, Ter Brugghen, Honthorst, and Mattias Stomer reproduced the extraordinary half-length figures in semi-circular groupings and visceral depiction of Thomas’s finger in Christ’s side from Caravaggio’s c. 1602 painting for Benedetto Giustiniani. In fact, these Northern artists were likely responsible for the sudden surge in popularity of Doubting Thomas imagery in the Netherlandish city of Utrecht during the first half of the 17th century.

Similarly, Jusepe de Ribera is credited with the spread of the Caravaggesque style to Spain, where it in turn may have influenced the work of Diego Velázquez. Ribera’s paintings of half-length saints, such as the St. Jerome and Sts. Peter and Paul, and large-scale devotional paintings such as the Lamentation over the Dead Christ reflect his years spent in Rome and Naples, where the art of Caravaggio fostered Ribera’s tenebrism and intimate portrayal of hallowed religious subjects. 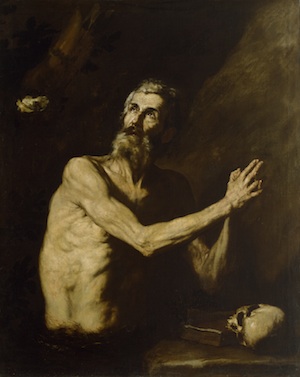 In 1612, two years after Caravaggio’s death, a young Ribera asked his Roman landlord for permission to cut a hole in his roof. Allowing natural light to illuminate models in Ribera’s studio, this makeshift skylight stands as unusual evidence of the lengths Caravaggisti might go to achieve the first-hand observation, dramatic lighting, and incisive realism that characterized this new approach to art.

Caravaggio in the Google Art Project

Biography of the artist from the National Gallery