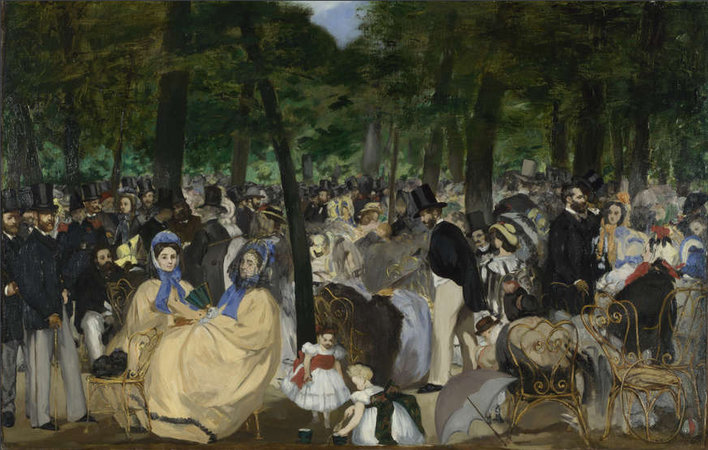 Music in the Tuileries

The writer Emile Zola described Manet as “an analytic painter” and rarely are his powers of analysis displayed more dazzlingly than in Music in the Tuileries Gardens.

First exhibited in 1862 at Manet’s one-man show in the Galerie Martinet, the chorus of gibes it was met with was to set the tone for the later drubbings he received for those larger Salon submissions, Déjeuner sur l’Herbe in 1863 and Olympia in 1865 (the Salon was the official art exhibition).

For the modern viewer, perhaps, it is difficult to see at first what all the fuss was about. The painting, a medium-sized group portrait. It depicts a crowd of music-lovers in the Tuileries Gardens and might seem to us quaint—old-fashioned even, evoking a fine day spent near the Louvre where concerts were performed twice weekly, and attracted the fashionable elite of the Second Empire. 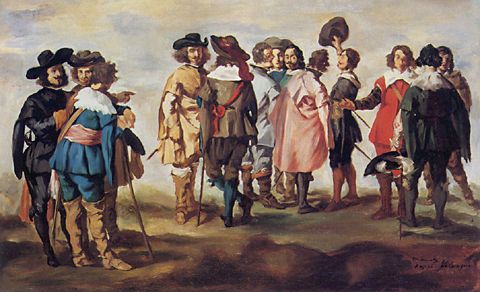 Shortly before Music, Manet made a copy after a painting then attributed to Velazquez, entitled Les Petits Cavaliers, depicting a meeting of Seventeenth-Century Spanish artists. The parallels with Music in the Tuileries Gardens are intriguing. Manet too surrounds himself with the great and the good of the contemporary art scene; including the composer Offenbach (seated to the right with top hat, moustache and glasses), the novelist and critic Champfleury (seated to the left), and the painter Bazille (standing centre left with the round grey hat).

Also, like Velazquez, Manet situates himself to the far left of the painting, prompting comparisons between himself and the man famous for bringing a greater psychological complexity to art, for scrutinising in paintings such as his masterpiece, Las Meninas, the relationship between the observer and the observed. The suggestion perhaps is that Manet’s own work plays with similar concerns. As in Las Meninas where the viewer stands in the place of the King and Queen whose portraits Velazquez is painting, here we occupy a similarly fictionalised space, seemingly where the musicians in the orchestra should be. Where else is the music of the title coming from if not us? It is a pleasing conceit, one which Velazquez himself might have been proud. 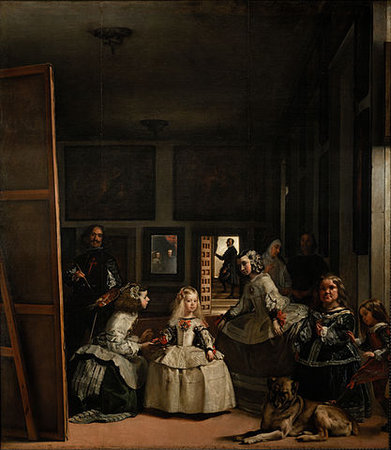 In keeping with the refined gentility of the subject, the composition has been carefully ordered, reflecting gender attitudes of the time: the women—grounded and passive—are mostly pictured seated, while the men—mobile and active—stand. The iron chairs in the foreground help set up this structure, introducing a color scheme repeated in the curvy female forms of the composition: the ladies’ golden and corn-coloured hats and dresses. The gentlemen meanwhile are largely dressed in blacks, echoing the dark vertical lines created by the trees, their top hats and frock coats merging with the trunks. This gendering of space is far from radical and can be found in the works of any number of nineteenth century artists. What is it about then that provoked such outrage? 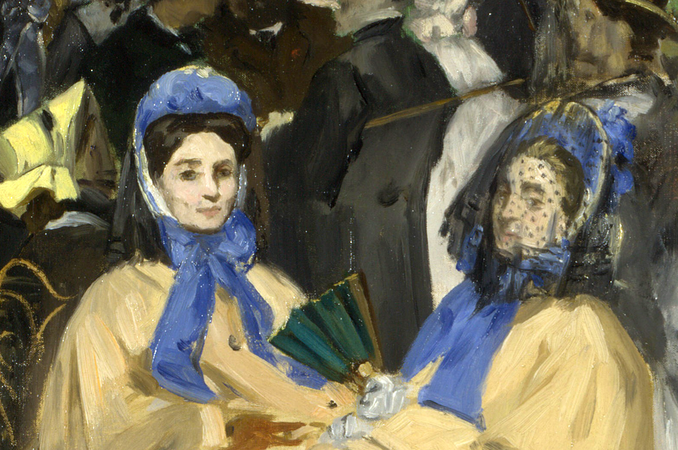 There are certainly some stylistically interesting decisions, such as the reduction of the sky to a paltry triangle of blue, or the insistence of that tree trunk, off-center, that slices through the picture plane, as one finds in Japanese prints, disrupting the horizontal axis and in turn the illusion of depth. The technique too is startling, the extraordinarily sketchy handling of paint with dabs of color that in places barely suggest discernible forms. All this would certainly have jarred exhibition visitors of the day.

Baudelaire and “The Painter of Modern Life”

What was probably most shocking though was the subject matter itself. We have grown so used to scenes of contemporary life in art that it is hard to imagine that in 1862, while acceptable in print illustrations for journals and newspapers, the depiction of modern urban life was not considered, certainly by the French Academy, a fitting subject for high art. By exhibiting it as such, Manet was taking a radical stance, one that would have been fully supported by his friend Charles Baudelaire.

In the early 1860s, Manet and the poet and critic Baudelaire met daily at the Tuileries. Baudelaire’s early essay “The Salon of 1846: On the Heroism of Modern Life” argued that modern life was as heroic and as worthy a subject as any taken from the classical world, that men in frock coats were as brave in their own way as gladiators were in Roman times. He developed and refined this idea in his 1863 essay “The Painter of Modern Life.”

A key concept in this essay is that not only should modern life be the artist’s favored subject, but that painting, rather than, for example, literature, is the ideal medium to express modernity. The visual experience of the city, the spectacle of the city, conveyed its essence, and integral to this is the crowd. After all, people made the city and set its pace, and with a population explosion unprecedented in history, life in Paris in the mid-Nineteenth Century had never been faster nor more crowded.

Not surprisingly, given their close association at the time, critics have been keen to draw links between Manet’s Music and Baudelaire’s essays. One observation that is cited relates to Baudelaire’s idea of the flâneur. 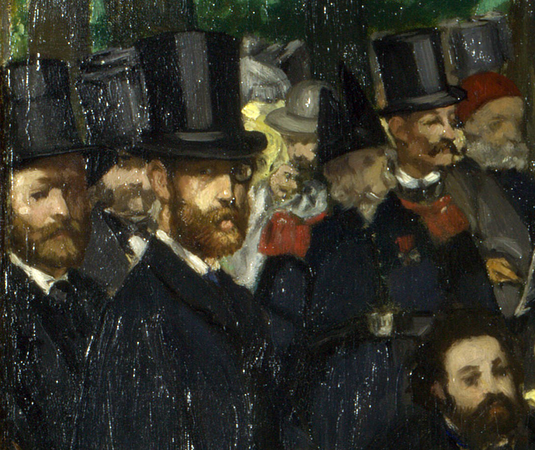 An artist wishing to record the hustle and bustle of this new city life, according to Baudelaire, needed to be at once a part of its crowds and possessed with the means, both intellectual and financial, to remain aloof from them; this artistic type he christened the flâneur, meaning “stroller” or “loafer.” By placing himself in the extreme left of the painting, critics have argued, Manet is deliberately identifying himself as a flâneur, the gentleman-dandy situated both within and removed from the crowd.

Baudelaire’s painter of modern life should capture, with just a few brush strokes, the carriage, expression and gesture of an individual, suggesting that to do so he would have to work at speed, mastering a sort of visual short-hand, simplifying forms to something not unlike caricature. This is certainly true of the loose, spontaneous brushwork used to render Music.

Modernity is the fleeting

The painting’s concern with modernity is distinctly Baudelairean. “Modernity is the transient, the fleeting, the contingent,” he famously wrote and capturing the fleeting moment is surely one of the main features of Music.

Light flickers between the trees, conjuring up chord progressions and the music referenced in the title. The treatment of space is even more intriguing. We notice, for instance, that some figures are more clearly defined than others, not in an orderly way such as in the Renaissance technique, aerial perspective where colors and form lose their clarity the further they are from us. Instead, Manet applies an arbitrary or “contingent” system that flouts these conventions. 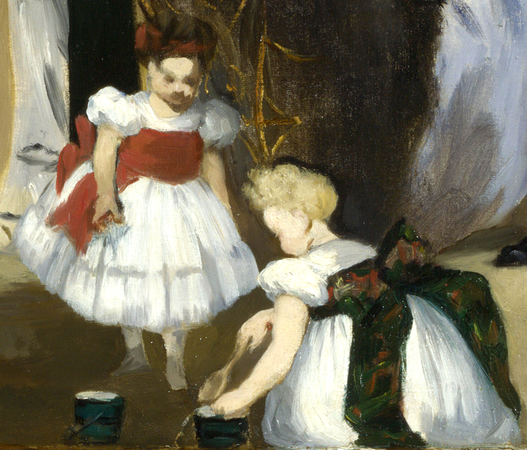 Notice how sketchy the children closest to us are when compared to others in the composition such as the Realist painter Henri Fantin-Latour shown with the beard and top hat to the left of the tree (pictured below).  In doing this, Manet, it seems, attempted to capture or rather reconstruct not simply a crowd but the optical experience of looking at a crowd.

The figure to the right of Fantin-Latour, whose face has become a mere blur of a profile, is Baudelaire himself. We might expect him to be more clearly depicted. That he isn’t suggests the depth of the affinity between these two men. By chance it is Fantin-Latour who has caught our eye and not Baudelaire. A moment later, it might have been different. 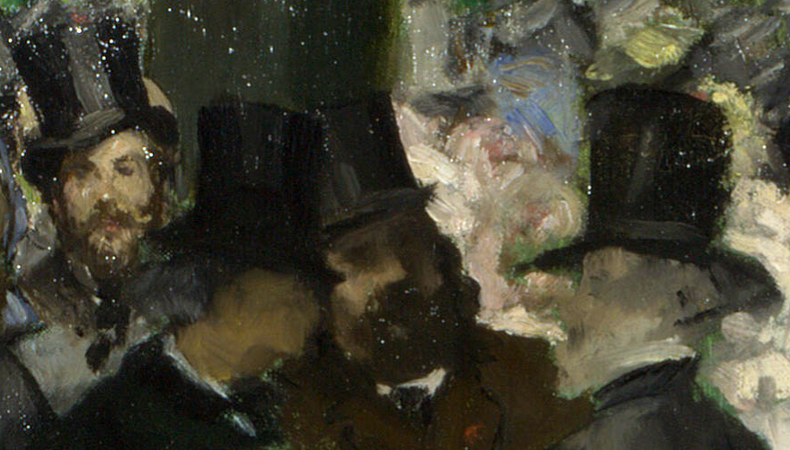 The artist Fantin-Latour (far left) and Baudelaire in profile with other figures (detail), Édouard Manet, Music in the Tuileries Gardens, 1862, oil on canvas, 76.2 x 118.1 cm (The National Gallery, London)

The transient, the fleeting and the contingent, these are the elements that Manet delights in—and by doing so, he willingly discards image-making techniques that had dominated Western art since the time of Leonardo.

This new form of perspective, both focused and fuzzy, may be likened to the way a camera mirrors the way the eye works. It is thought that Manet used portrait photographs as visual aids when composing the painting in his studio. Rather than slavishly copying these photographs, however, Manet has analyzed and abstracted the principles that underpin this new technology, creating what, as yet, only painting can achieve, an effective visual rendering of the passing of time.

“Almost all our originality comes from the stamp that ‘time’ imprints upon our feelings”, wrote Baudelaire and herein lies Music’s greatness, a painting that has been somewhat overshadowed by the success of the scandal of Déjeuner sur l’Herbe and Olympia, but which nevertheless has a fair claim to being the first modern painting in Western art.

This painting in the National Gallery, London