Since Manet (and Degas, Monet, and Cezanne), artists have sought to undermine the illusion of space that had ruled painting since about 1425. Spatial illusion was increasingly seen as a defect that reduced the integrity of painting. But as the earlier painters of the avant-garde have shown, ridding a painting of illusion is almost impossible. The audience is trained to expect three dimensional space and sees it given the opportunity. This is Matisse’s challenge. He meets this challenge–the destruction of spatial illusion, in three stages. 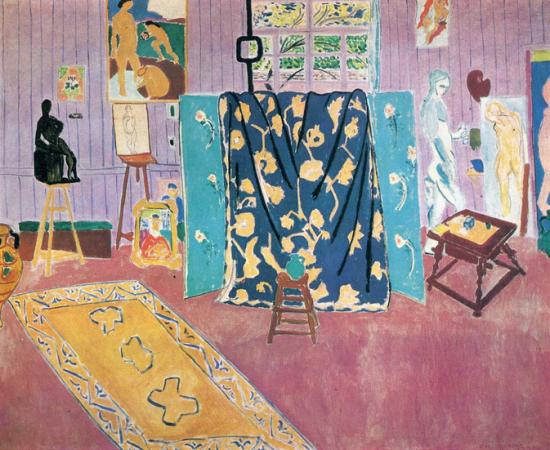 Red is often thought of as the most aggressive color. It has the most punch, and that’s what Matisse needed here. This canvas was a part of a series, there is, for instance, a Pink Studio too. But that canvas was concerned with different issues. Here, the red is an attempt to find a color that is forceful enough to resist the illusion of deep space by pushing to the surface. The red is, of course painted onto the flat canvas but actually fails to remain there visually. Instead, the red becomes the walls and furnishing of the room seen in space. Illusion triumphs–Matisse is thwarted. This triumph of illusion is due in part to the linear perspective that defines the table, chairs, and the walls and floor of the studio. But look! Matisse has constructed some of the worst linear perspective ever seen. Receding lines should converge, but look at the chair on the lower right. The lines widen as they go back. And look to rear left corner of the room. The corner is defined by the edge of the pink canvas but above that painting, the line that must define the corner is missing! Matisse is literally dismantling the perspective of the room but it makes no difference, we still see the room as an inhabitable space. Illusion still triumphs.

Although it is very difficult to see in reproduction, if seen in person at MoMA, it is clear that the whitish lines that define form in the red field are not painted on top of the red. Instead, they are reserve lines. In other words, the white lines are actually the canvas below. Matisse painted the red planes up to the line on either side, leaving a narrow gap of white canvas in between. This is really IMPORTANT. Stay with me on this. The white line is actually emerging from below the red. It is beneath. The red is of course painted on top of the white canvas.

Okay, now pay attention. Matisse has realized that illusion is almost certain to triumph no matter how aggressively he tries to undermine it. We, as the audience, will see space if given the slightest opportunity. So if we see illusion at such a basic level, what hope does Matisse have of destroying it? In fact, his reserve line are his really brilliant solution. The chairs, the dresser, the clock, each object, or figure in The Red Studio is constructed out of the canvas below. At the same time, the ground which supports those figures, is constructed out of a plane of red that is physically above the canvas. What Matisse has done then is reverse the figure ground relationship. He has made the figure out of the ground (the canvas) and made the ground out of the figure (the red paint on top). When seen in person, the recognition of this does finally destroy illusion, Matisse triumphs! 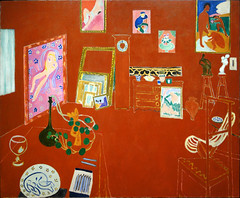 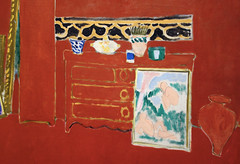 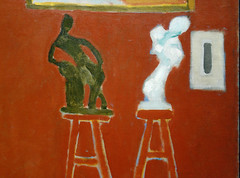 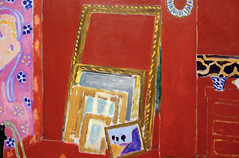 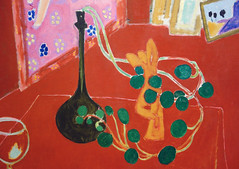 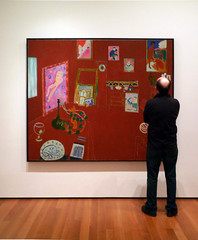 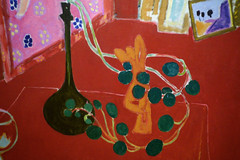