The Joy of Life

In 1906, Henri Matisse finished what is often considered his greatest Fauve painting, the Bonheur de Vivre, or the “Joy of Life.” It is a large-scale painting depicting an Arcadian landscape filled with brilliantly colored forest, meadow, sea, and sky and populated by nude figures both at rest and in motion. As with the earlier Fauve canvases, color is responsive only to emotional expression and the formal needs of the canvas, not the realities of nature. The references are many, but in form and date, Bonheur de Vivre is closest to Cézanne’s last great image of bathers.

Matisse and his sources

Like Cézanne, Matisse constructs the landscape so that it functions as a stage. In both works trees are planted at the sides and in the far distance, and their upper boughs are spread apart like curtains, highlighting the figures lounging beneath. And like Cézanne, Matisse unifies the figures and the landscape. Cézanne does this by stiffening and tilting his trunk-like figures. In Matisse’s work, the serpentine arabesques that define the contours of the women are heavily emphasized, and then reiterated in the curvilinear lines of the trees. Matisse creates wildly sensual figures in Bonheur de Vivre, which show how he was clearly informed by Ingres’s odalisques and harem fantasies. 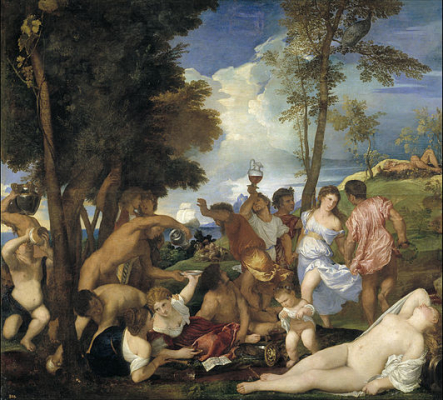 Additionally, Matisse references Titian. For like Titian’s Bacchanal of the Andrians, the scene depicted in Bonheur de Vivre is an expression of pure pleasure. Here is a place full of life and love and free from want or fear. Instead of a contemporary scene in a park, on the banks of the Seine, or other recognizable places in nature, Matisse has returned to mythic paradise.

Radicalism, or how to color outside the lines

But do not be misled by his interest in myth—Matisse is not joining in with Bouguereau or any other Salon artist. This is the epitome of Fauvism, a radical new approach that incorporate purely expressive, bright, clear colors and wildly sensual forms. Matisse’s painting s perhaps the first canvas to clearly understand Cézanne’s great formal challenge, and to actually further the elder master’s ideas. In fact, despite its languid poses, Bonheur de Vivre was regarded as the most radical painting of its day. Because of this, Matisse became known, briefly, as the most daring painter in Paris.

So what was daring about this canvas? Here is one key issue: unlike the paintings by Cézanne, Ingres, or Titian, Matisse’s work does not depict forms that recede in the background and diminish in scale. If you study the figures in the foreground and the middle ground of Bonheur de Vivre, you will notice that their scale is badly skewed. The shift of scale between the player of the double flute (bottom center) and the smooching couple (bottom right) is plausible, if we take the musician to be a child, but what of the giants just behind them? Compared to the figures standing in the wings, who are obviously mature women (middle ground left), these center women are of enormous proportion. They are simply too big to make sense of within the traditional conventions of Western painting.

So why has Matisse done this? How could these shifts of scale make sense? Have we seen anything like this before? Well, in a sense we have. Cézanne’s painting ruptured forms in order to accurately explore vision as experienced through time and space—in other words, forms look different depending on where we are in relation to them.

In fact, this exploration of vision through space is the key to understanding Matisse’s work. By incorporating shifting perspectives, he brought this idea to a grand scale. Put simply, Matisse’s shifting scale is actually the result of our changing position vis-à-vis the figures. As a result of his experimentation with perspective, the viewer relates differently to the painting and is required to “enter” the scene. It is only from the varied perspectives within this landscape that the abrupt ruptures of scale make sense.

The painting was purchased by a wealthy expatriate American writer-poet named Gertrude Stein and her brother, Leo Stein, who shared a home filled with modern art at 27 Rue de Fleurus, in Paris. This was also the location for Gertrude Stein’s weekly salon. Here, Matisse, Apollinaire, the young and largely unknown Picasso and other members of the avant-garde came together to exchange ideas.

Stein was able to attract such a crowd not only because of her literary skills but because she often provided financial support to these nearly destitute artists. In fact, the Steins bought Matisse’s Bonheur de Vivre soon after its completion and hung it in their dining room for all to see. One person who saw it there was Picasso. By all accounts the painting’s fame was too much for the terribly competitive young Spaniard. He determined to out do Matisse, and he did with his 1907 canvas, Demoiselles d’Avignon (MoMA). 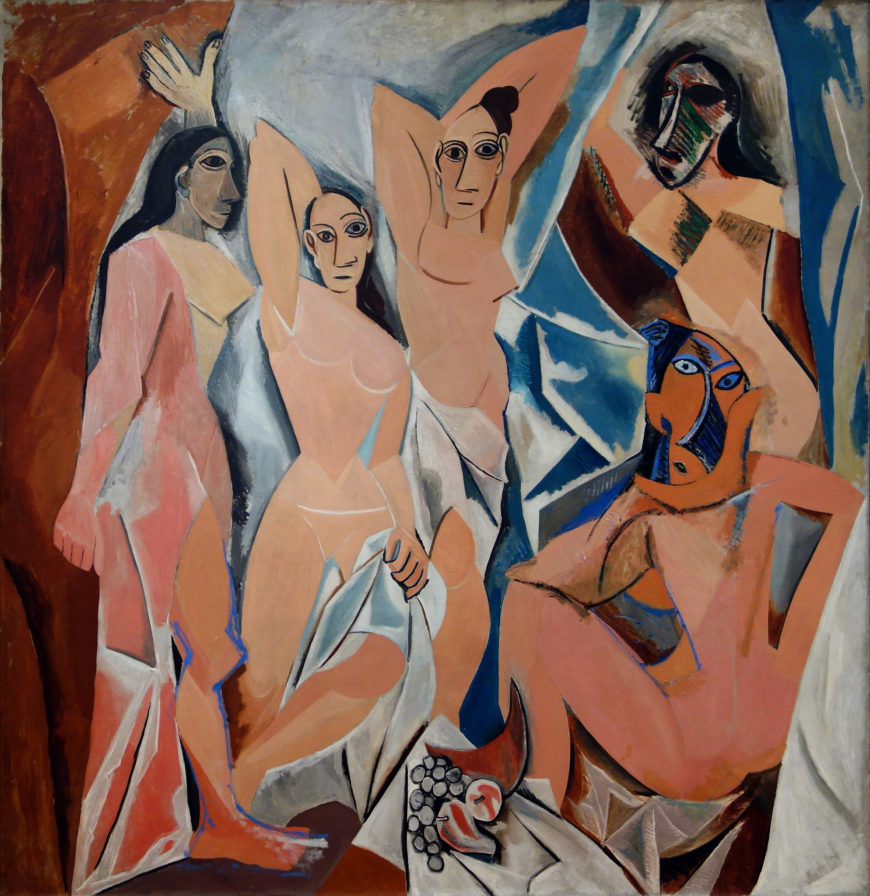 Picasso turned Matisse’s sensuality into violent pornography. Matisse in turn responds to the challenge of what was then called “primitivism” with his own brand of aggression in his Blue Nude. 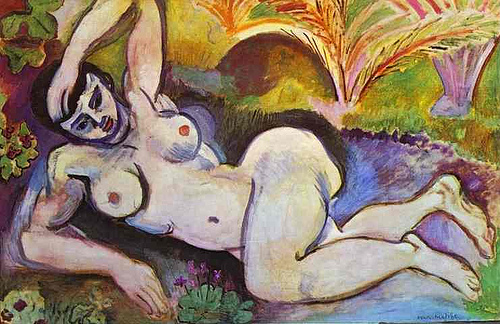 This painting at The Barnes Foundation

The Fauves from the National Gallery of Art Online Tour