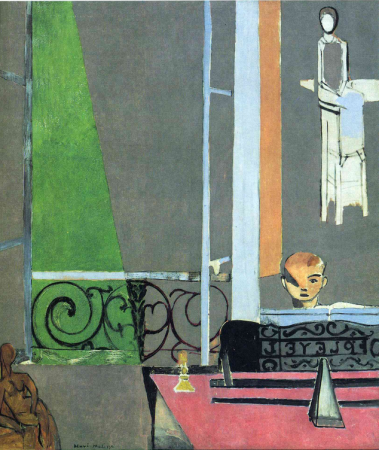 This highly abstract painting is important because of its relation to the Cubist grid developed by Pablo Picasso and Georges Braque, because of its biographical aspects, and especially due to its thoughtful iconography (symbolic content).

This large flat gray painting can be a bit confusing at first. Let’s begin with the boy in the lower right. He is the artist’s son, Pierre Matisse, who grows up to become a famous art dealer in New York in the 1940s. It’s worth remembering that 1916 was during world war one, the most devastating conflict Europe had yet known. When Henri painted this image, Pierre was actually mobilized. The painter did not know if his son would return. In a way then, this is a nostalgic image, Matisse has painted his son much younger then he actually was, perhaps recalling happier times. Maybe happy isn’t really the right word since Pierre looks pretty miserable. Maybe I’m just remembering my own childhood piano lessons, but his is a look of worried concentration. A portion of his face even seems to reflect that instrument of the devil, commonly known as a metronome. Pierre sits at the piano well off to the side, trapped in the house even as the open French window (a floor-to-ceiling hinged window that opens onto a wrought iron railing) beckons. Finally, what is that very abstract truncated triangle of green? Often it is interpreted as ray of sun reaching across the lawn outside. 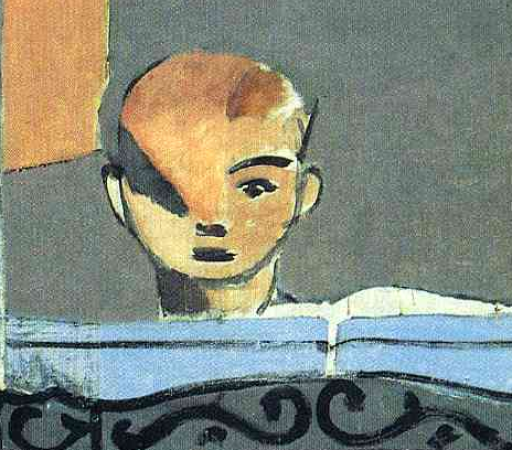 You can see why poor little Pierre is so attentive. His music teacher literally hovers above him, cold, distant, and aloof. What a wonderful contrast to the other female figure in the painting.While the teacher represents discipline through her rigid rectilinear form, the small bronze nude at the lower left is virtually all curves. This small sculpture by Matisse is meant to represent the creative spirit while the teacher represents discipline, and like two boxers between rounds, each is in her corner. But wait! Is the teacher really there? Space is so ambiguous that it is hard to tell if there is really a distant room for her to inhabit. In fact, there is not and she is not. This is Matisse’s house in the suburb Issey-les-Moulineaux and this is a wall. The “teacher” is actually a painting by Matisse titled, Woman on a High Stool (Germaine Raynal), 1914 (MoMA). 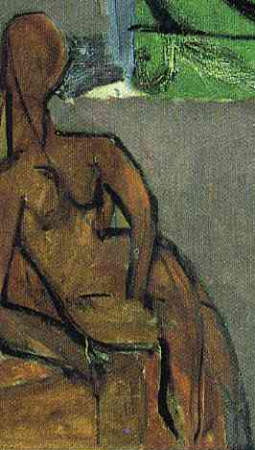 Matisse has transformed the original painting in order that Raynal play the part of the strict instructor, Matisse often created variations on themes that he had already treated. So, in fact, Matisse has created a painting of a painting and a painting of a sculpture. This suggests that perhaps The Piano Lesson is not only about Pierre and his childhood experiences but more importantly, the act of creation itself. Is Pierre actually a stand in for Henri? After all, music is a common metaphor for the visual arts.

A visual equivalent of music

Is Matisse then saying that art is the result of both sensual creativity (the sculpture) and strict discipline (the painting)–is the metronome that swings between the two, a mediator? And then what of the odd inclusion of the carved music stand which contains the brand of the piano, “PLEYEL” (which is read backwards as we see it)?

As you can see from the later and less abstract painting Music Lesson, Matisse has removed everything that is not essential from the 1916 canvas. So why then retain these letters? And why retain the playful swirling wrought iron fence? According to Jack Flam, a leading Matisse scholar and an old instructor of mine (and by the way, not very strict nor rectilinear), Matisse wants us to read the letters from right to left and then continue to read past the music stand by jumping to the curving iron fence which he believes to be an abstract expression or visual equivalent of the music (art) that is being produced. 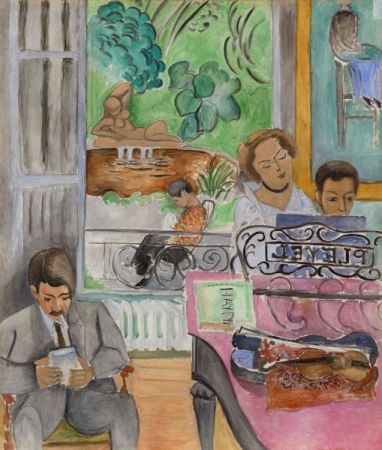 Audio on this painting from MoMA 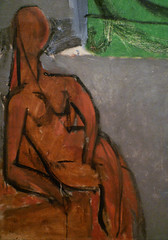 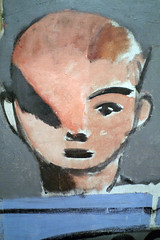