The Pietà was a popular subject among northern european artists. It means “Pity” or “Compassion,” and represents Mary sorrowfully contemplating the dead body of her son which she holds on her lap. This sculpture was commissioned by a French Cardinal living in Rome.

Look closely and see how Michelangelo made marble seem like flesh, and look at those complicated folds of drapery. It is important here to remember how sculpture is made. It was a messy, rather loud process (which is one of the reasons that Leonardo claimed that painting was superior to sculpture!). Just like painters often mixed their own paint, Michelangelo forged many of his own tools, and often participated in the quarrying of his marble — a dangerous job.

When we look at the extraordinary representation of the human body here we remember that Michelangelo, like Leonardo before him, had dissected cadavers to understand how the body worked. 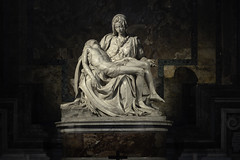