The Railway, also known as Gare Saint-Lazare, is surely one of the most inscrutable paintings of the nineteenth century. Manet began work on it in the autumn of 1872, the year of Victor Hugo’s L’Année Terrible, a collection of poems outlining the catastrophic events of 1870-1: France’s defeat by the Prussians, Bismarck’s devastating siege of Paris, and the violence that saw out the Paris Commune in the summer of 1871; a truly terrible year in which, all told, through combat, starvation or civil strife, almost 200,000 French lost their lives. 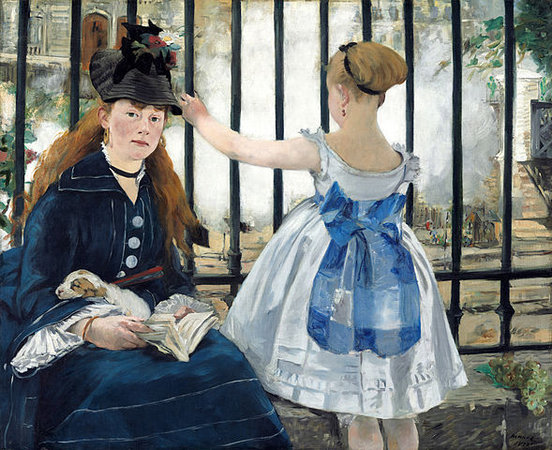 The painting, Manet’s first major canvas since the outbreak of war, went on show in the Paris Salon of 1874, the year of the first Impressionist exhibition, heralding the ascendancy of a style of art that stood for leisure, pleasure, spontaneity, freedom and nature. Situated between these two historical moments, Manet’s work stands on the crossroads: both serious and playful, unfettered and restrained.

The painting shows two figures, a seated woman and a standing child, in front of a set of iron railings; behind them are railway tracks, a barely perceptible group of workers next to a shed, an iron bridge and, furthest away, the facades of residential houses. The woman’s cropped dress and the subtle diagonals of the structural setting create a sense of uncertainty, as though chance has had a hand in framing the scene, as though we have somehow stumbled upon it? Her reading interrupted, by us or by her own thoughts, a finger placed to mark her page, the woman looks at us directly. Who is she and who are we to her? 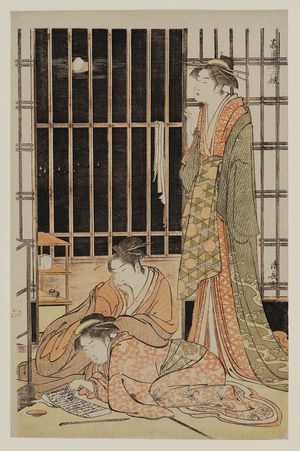 Torii Kiyonaga, “The Ninth Month” from the series The Twelve Months in the Southern District, 1784, woodblock print

The model is Victorine Meurent, Manet’s muse of the 1860’s who posed for both Olympia and the nude figure in Déjeuner sur l’Herbe. Here she exudes a sense of middle-class propriety, fashionably dressed in a deep blue dress with large, light blue buttons, wide cuffs and collars. In her lap a puppy doses, the child’s pet perhaps, the red fan behind it finding echoes in the flowers in her hat, the girl’s pendant earring and the rail worker’s shirt to the left. The black hat is a clever device, tilted forwards as was the fashion and held in place with a tie-back bow. Not only does it elevate the figure to a level slightly higher than the girl, it also neatly emphasizes the flatness of the picture plane, an effect enhanced further of course by the iron railings. The interplay of flatness and depth is one of Manet’s most daring innovations, inspired perhaps by his growing familiarity with Japanese woodblock prints.

Used expertly here, the technique sets off perfectly the ambiguous relationships between the two principle figures. Both connected and oddly detached, we sense they belong together, the matching colours of their dresses suggesting the fact, but quite how remains unclear. Is she her daughter, her niece, her sister? Is she a governess and the girl her ward?

To confound us further, the child – who was in fact the daughter of Manet’s painter friend Alphonse Hirsch—has her back turned to us, a compositional device known as the Rückenfigur. Just as we cannot see her face, whatever has grabbed her attention, a departing train we might imagine, is obstructed from view. 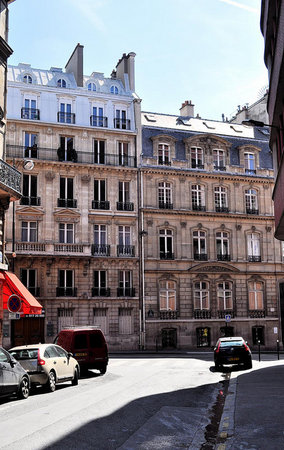 One thing we can be certain of is the location it depicts, an area in and around the Place de l’Europe, a sort of grandiose traffic island next to the Gare Saint-Lazarre from which a network of streets radiate, each named after a European capital, the rue de Rome, the rue de Madrid and so on. The iron gridwork and large masonry pillars of the bridge to the right belong to the Pont de l’Europe, the orthogonals of which lead the eye into the background creating an area of interest to counter the dominance of the seated woman to the left. Behind her on the other side of the tracks two doorways are visible, the one in clear view being the entrance to 4 rue de St Pétersbourg, which served as Manet’s studio from 1871 to 1877. 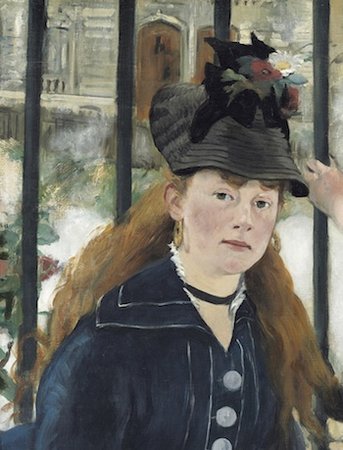 For some art historians, Manet’s choice in depicting this new quarter of Paris, built according to the utilitarian principles of logic, order and efficiency that underpinned Baron Haussmann’s major renovation of Paris in the 1850’s and 60’s, would suggest that the artist was very much at home in the modern world. The constant commotion of rail transport was, according to contemporary accounts, a part of the artist’s daily life; visitors to his new studio commented on how the floor would tremble as the trains passed beneath.

An aerial view of the Place de l’Europe illustrates the complex network of roads running through it and tracks running under it. Painted at the hub of this frenetic intersection and with his studio proudly featured in it, The Railway then might reasonably stand as a homage to the wonders of modern transport, capturing something of the optimism of Paris in the Third Republic. 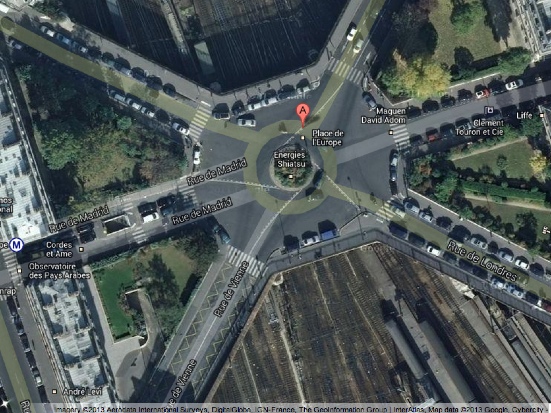 Aerial view of the Europe District (4 rue de St-Pétersburg is on the upper right hand road, leading off from the Place de L’Europe)

Others have seen the painting more as an examination of the impact of industrialization. The fracture between the foreground figures and background setting being the focus of many such discussions of the work, particularly the cage-like quality of the railings. A contemporary cartoonist re-titled the work: “The Railway. Two madwomen, gripped by incurable mono-manet-ia, watch the rail cars through the bars of their cell.” The prison or asylum analogy, played on comically here, has been adopted by other, more serious-minded critics.

Robert L. Herbert¹, for instance, notes how the middle-class figures are artificially caged off from the railway workers, reflecting the rigid divisions of labor brought about by industrialization. The railings in this sense suggest an artificial imposition of order, both in terms of the organization of pictorial space and the social relations operating within it. The sense of fracture and dislocation is felt in the title itself, for the railway seems surprisingly peripheral – marked by a few shadowy streaks of paint – as compared to the solid bulk of the railings. Nor for that matter is the train actually made visible, its presence only suggested by the steam.

Describing The Railway as an “as essay on consciousness,” the critic Harry Rand² argues that the psychological complexity of the painting owes much to the friendship Manet struck up during this period with the symbolist poet Stéphane Mallarmé, one of the greatest literary figures of his age. A fellow resident of the rue de Saint-Pétersburg, the two met daily for almost a decade. 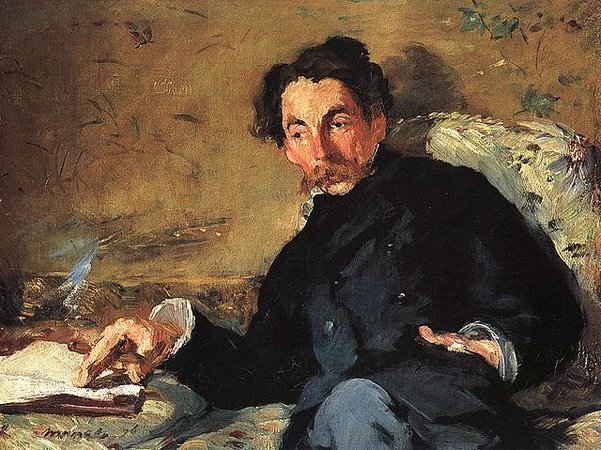 Rand likens Mallarmé’s poetic concerns, his love of the playful and the dreamlike, of finding beauty in uncertainty and chance, to Manet’s painterly concerns in The Railway. That hazy plume of steam, for instance, set against the metallic bulk of the railings, is quintessentially symbolist, the insubstantiality and intangibility of the steam standing, ironically perhaps, as a symbol for the powerfully solid train, while at the same time the steam obscures the background we imagine lies beyond it, blurring the space between foreground and background. Like so much else in the painting, therefore, it serves both to reveal and to conceal. In fact, the more one looks at it, the more essential it becomes, to the point where, with T.J. Clark³, we might reasonably declare that it is less the railway or chemin de fer (road of iron), but the steam itself that is the painting’s “great subject”. 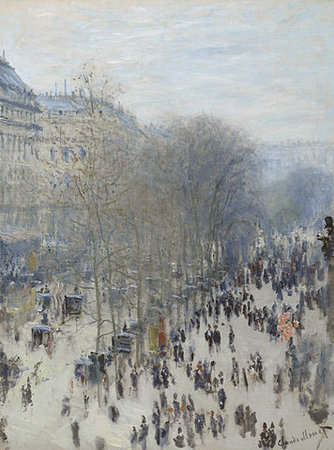 The painting is famously open to interpretation. I have touched on just a narrow selection of readings here. Broadly speaking, each highlights the fact that in the world of the painting, though localized and particular, nothing is fixed and certain. It is a theme that would be taken up by the Impressionists. Monet’s Boulevard des Capucines, for instance, presents a view from the window of Nadar’s studio where that first exhibition took place in 1874. Visitors would look at the painting hanging on the wall, then step to the balcony to inspect the scene for themselves. However, the correlation between the two was not a literal or mimetic one, a fact that provoked consternation at the time. Though we have may grown accustomed to such distortions in art, they still seem remarkably fresh and resonant, these great works, our continued love for them explained no doubt by how effectively they evoke our relationship with this strange world in which we live and which strangely lives in us.

Web feature at the National Gallery of Art

Introduction to a Painting: Manet’s The Railway from the National Gallery of Art

Video from the National Gallery of Art’s Children’s Tour

Manet from An Introduction to Nineteenth Century Art at Routledge 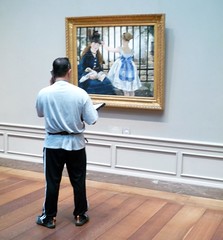 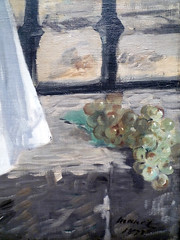 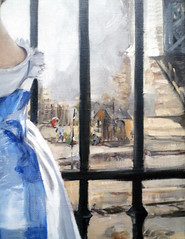 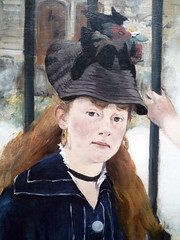 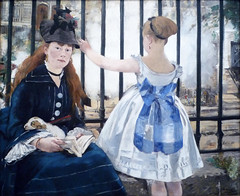