What would be the best way today to protest against a war? How could you influence the largest number of people? In 1937, Picasso expressed his outrage against war with Guernica, his enormous mural-sized painting displayed to millions of visitors at the Paris World’s Fair. It has since become the twentieth century’s most powerful indictment against war, a painting that still feels intensely relevant today.

Much of the painting’s emotional power comes from its overwhelming size, approximately eleven feet tall and twenty five feet wide. Guernica is not a painting you observe with spatial detachment; it feels like it wraps around you, immerses you in its larger-than-life figures and action. And although the size and multiple figures reference the long tradition of European history paintings, this painting is different because it challenges rather than accepts the notion of war as heroic. So why did Picasso paint it? 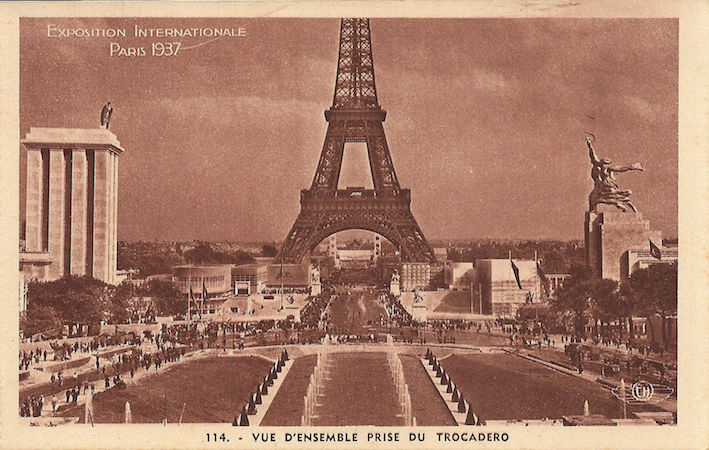 Postcard of the International Exposition, Paris, 1937 (from a series of 20 detachable cards, edited by H. Chipault)

In 1936, Picasso (who was Spanish) was asked by the newly elected Spanish Republican government to paint an artwork for the Spanish Pavilion at the 1937 Paris World’s Fair. The official theme of the Exposition was a celebration of modern technology. Yet Picasso painted an overtly political painting, a subject in which he had shown little interest up to that time. What had happened to inspire it?

Crimes against humanity: an act of war 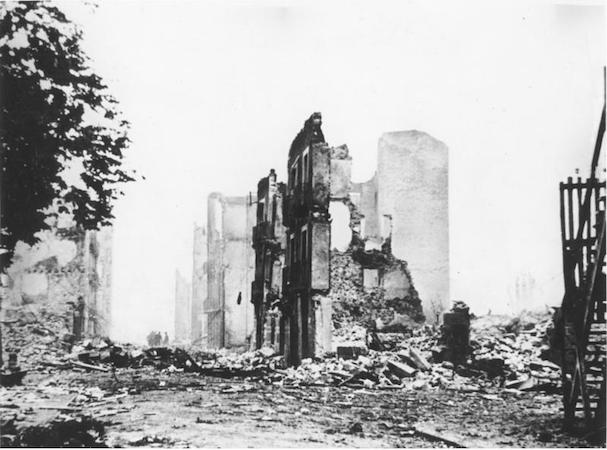 In 1936, a civil war began in Spain between the democratic Republican government and fascist forces, led by General Francisco Franco, attempting to overthrow them. Picasso’s painting is based on the events of April 27, 1937, when Hitler’s powerful German air force, acting in support of Franco, bombed the village of Guernica in northern Spain, a city of no strategic military value. It was history’s first aerial saturation bombing of a civilian population. It was a cold-blooded training mission designed to test a new bombing tactic to intimidate and terrorize the resistance. For over three hours, twenty five bombers dropped 100,000 pounds of explosive and incendiary bombs on the village, reducing it to rubble. Twenty more fighter planes strafed and killed defenseless civilians trying to flee. The devastation was appalling: fires burned for three days, and seventy percent of the city was destroyed. A third of the population, 1600 civilians, were wounded or killed.

On May 1, 1937, news of the atrocity reached Paris. Eyewitness reports filled the front pages of local and international newspapers. Picasso, sympathetic to the Republican government of his homeland, was horrified by the reports of devastation and death. Guernica is his visual response, his memorial to the brutal massacre. After hundreds of sketches, the painting was done in less than a month and then delivered to the Fair’s Spanish Pavilion, where it became the central attraction. Accompanying it were documentary films, newsreels and graphic photographs of fascist brutalities in the civil war. Rather than the typical celebration of technology people expected to see at a world’s fair, the entire Spanish Pavilion shocked the world into confronting the suffering of the Spanish people.

Later, in the 1940s, when Paris was occupied by the Germans, a Nazi officer visited Picasso’s studio. “Did you do that?” he is said to have asked Picasso while standing in front of a photograph of the painting. “No,” Picasso replied, “you did.”

When the fair ended, the Spanish Republican forces sent Guernica on an international tour to create awareness of the war and raise funds for Spanish refugees. It traveled the world for 19 years and then was loaned for safekeeping to The Museum of Modern Art in New York. Picasso refused to allow it to return to Spain until the country “enjoyed public liberties and democratic institutions,” which finally occurred in 1981. Today the painting permanently resides in the Reina Sofia, Spain’s national museum of modern art in Madrid.

What can we see?

This painting is not easy to decipher. Everywhere there seems to be death and dying. As our eyes adjust to the frenetic action, figures begin to emerge. On the far left is a woman, head back, screaming in pain and grief, holding the lifeless body of her dead child. This is one of the most devastating and unforgettable images in the painting. To her right is the head and partial body of a large white bull, the only unharmed and calm figure amidst the chaos. Beneath her, a dead or wounded man with a severed arm and mutilated hand clutches a broken sword. Only his head and arms are visible; the rest of his body is obscured by the overlapping and scattered parts of other figures. In the center stands a terrified horse, mouth open screaming in pain, its side pierced by a spear. On the right are three more women. One rushes in, looking up at the stark light bulb at the top of the scene. Another leans out of the window of a burning house, her long extended arm holding a lamp, while the third woman appears trapped in the burning building, screaming in fear and horror. All their faces are distorted in agony. Eyes are dislocated, mouths are open, tongues are shaped like daggers.

Picasso chose to paint Guernica in a stark monochromatic palette of gray, black and white. This may reflect his initial encounter with the original newspaper reports and photographs in black and white; or perhaps it suggested to Picasso the objective factuality of an eye witness report. A documentary quality is further emphasized by the textured pattern in the center of the painting that creates the illusion of newsprint. The sharp alternation of black and white contrasts across the painting surface also creates dramatic intensity, a visual kinetic energy of jagged movement.

On first glance, Guernica’s composition appears confusing and chaotic; the viewer is thrown into the midst of intensely violent action. Everything seems to be in flux. The space is compressed and ambiguous with the shifting perspectives and multiple viewpoints characteristic of Picasso’s earlier Cubist style. Images overlap and intersect, obscuring forms and making it hard to distinguish their boundaries. Bodies are distorted and semi-abstracted, the forms discontinuous and fragmentary. Everything seems jumbled together, while sharp angular lines seem to pierce and splinter the dismembered bodies. However, there is in fact an overriding visual order. Picasso balances the composition by organizing the figures into three vertical groupings moving left to right, while the center figures are stabilized within a large triangle of light.

There has been almost endless debate about the meaning of the images in Guernica. Questioned about its possible symbolism, Picasso said it was simply an appeal to people about massacred people and animals. ”In the panel on which I am working, which I call Guernica, I clearly express my abhorrence of the military caste which has sunk Spain into an ocean of pain and death.” The horse and bull are images Picasso used his entire career, part of the life and death ritual of the Spanish bullfights he first saw as a child. Some scholars interpret the horse and bull as representing the deadly battle between the Republican fighters (horse) and Franco’s fascist army (bull). Picasso said only that the bull represented brutality and darkness, adding “It isn’t up to the painter to define the symbols. Otherwise it would be better if he wrote them out in so many words. The public who look at the picture must interpret the symbols as they understand them.”

In the end, the painting does not appear to have one exclusive meaning. Perhaps it is that very ambiguity, the lack of historical specificity, or the fact that brutal wars continue to be fought, that keeps Guernica as timeless and universally relatable today as it was in 1937.