Pairs of carved wooden headdresses in the form of antelopes, like these examples, refer to the mythic culture hero Ci Wara, a divine force conceived of as half man and half antelope. Bamana oral traditions credit Ci Wara with introducing to humanity agricultural methods and an understanding of earth, animals, and plants. In the nineteenth and early twentieth centuries, Ci Wara was invoked and honored by members of a men’s agricultural association, also called ci wara, in village-wide performances that celebrated the skills of successful farmers. These performances featured a pair of dancers wearing sculpted headdresses, one representing a male antelope and the other a female. They held sticks in their hands to paw the earth just as the mythic Ci Wara did when he first taught men to plant seeds.

In performance, the paired dancers symbolize the union between men and women, essential for the continuity of the community. The formal features of the headdress also reference elements of nature necessary to sustain life. The male serves as a metaphor for the sun, while the female is associated with the earth. The long strands of raffia fibers attached to the headdress, concealing the dancer, are likened to streams of water. Although ci wara headdresses are generally described as representing antelopes, they incorporate features of other animals, including aardvarks and pangolins. These animals are selected for their symbolic value. In this pair, the horns and long, arched neck represent the antelope, associated with grace and strength. The head with a long, pointed nose and the low-slung body are features of the aardvark, admired for its determination in digging. The sculpted headdress is attached to a basketry skullcap (now missing on these examples) and secured on top of the dancer’s head with a cotton strip. The dancer’s face would be covered by a semitransparent cloth, and a costume of darkened raffia fiber would cloak the dancer’s body. 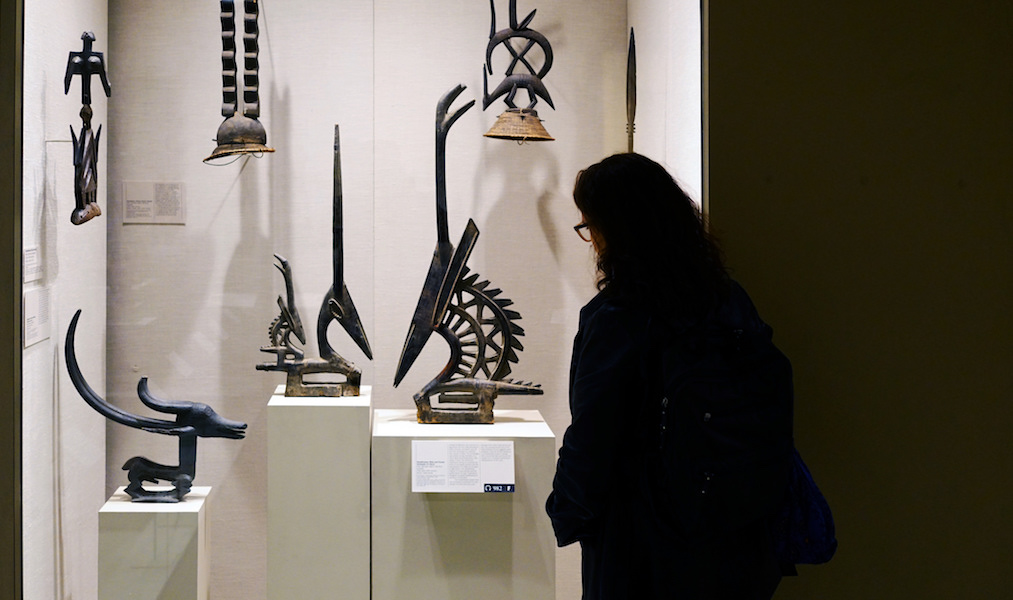 The silhouette-like nature of sculptural representation is noted for its elegant play of positive and negative space. The male, identified as a roan antelope, is distinguished by its long horns and elaborate openwork mane. The female, representing an oryx antelope, carries a fawn on her back, a reference to human mothers, who carry babies on their backs as they till the fields. The face and horns of both are decorated with delicate chip-carved patterning, incised linear designs, and metal appliqué and strips.

The Bamana, who live in the southern part of present-day Mali, have long considered farming to be among the most noble of all professions. Traditionally, Bamana farmers have worked arduously in the savanna fields from May to October, when it rains regularly, in order to provide enough food during the long, dry season. Today, despite the significant social changes that have impacted contemporary Bamana experience, farming remains central to their identity. Although many Bamana have adopted Islam over the course of the last century, theatrical ci wara dances continue in many Bamana villages, celebrating their agrarian lifestyle. Among the continent’s most well-known forms of expression, the elegantly abstract form of the ci wara headdress has also been adopted as a national symbol of cultural identity, used as a logo by Mali’s official airline and found on the national currency.

The Artist Project: Willie Cole (from The Metropolitan Museum of Art). Willie Cole, born in 1955, is an American sculptor who lives and works in New Jersey. See an example of his work here.

Bamana art from The Metropolitan Museum of Art

Bamana peoples on Art and Life in Africa (University of Iowa)