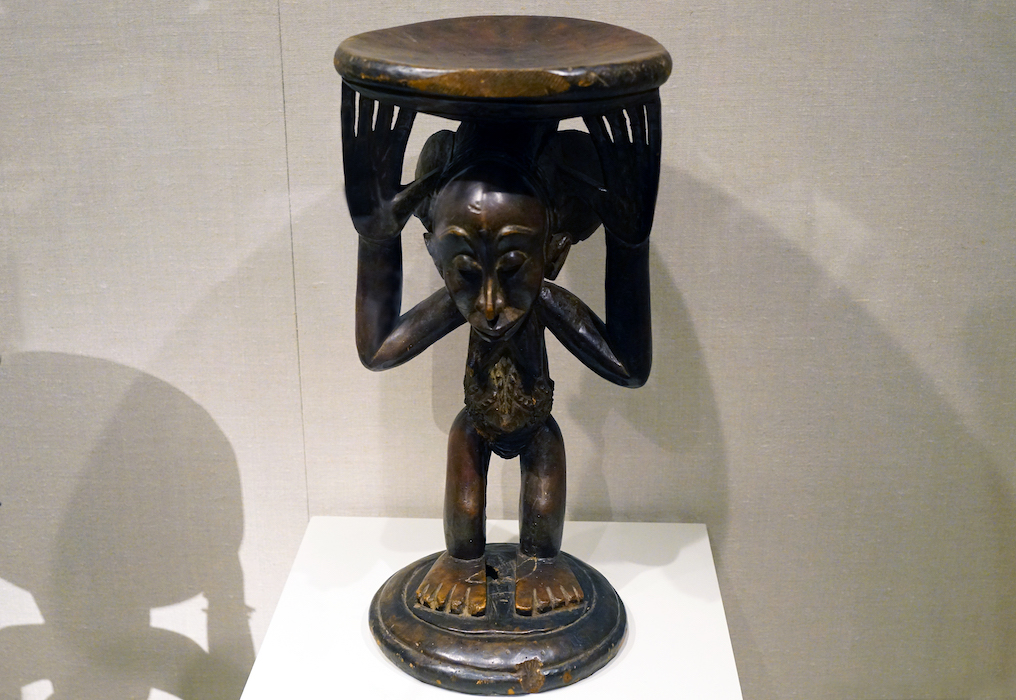 Sculpted seats are among the most important insignia of office used exclusively by Luba rulers, including kings, chiefs, and the heads of clans or lineages. A royal stool is believed to serve as a receptacle for a ruler’s spirit. It therefore holds great symbolic value as the repository and wellspring of sacred kingship. Such seats, part of the ensemble of regalia that constitutes a Luba treasury, are an integral part of the investiture ceremony establishing a ruler’s political authority. Except for these rare ceremonial occasions, the royal stool was wrapped in cloth and safeguarded by a specially designated official.

This figurative example is supported by a standing female figure whose high status is indicated by her elaborate four-lobed coiffure and intricate raised scarification patterns on her torso, both front and back. The depiction of women on royal stools acknowledges their important political and symbolic roles in Luba society. Historically, female royals were often married to chiefs in outlying areas, helping to expand and unify the kingdom. Because the Luba trace succession and inheritance through the female line, such marriages established important bonds of kinship and allegiance. The imagery of the female supporting the stool symbolizes the fact that the chief or king inherits the right to rule through his female ancestors. Luba leaders owned a series of items of regalia depicting female figures which referred to the female body as a receptacle for the spiritual power of divine kingships. This royal ceremonial stool was created by an artist known as the Buli Master, celebrated for the distinctive formal structure and emotional appeal of his sculptures. His extraordinary artistic legacy is a corpus of about twenty stylistically related works, all demonstrating a unique expressionism. Lacking the youthful idealism more commonly seen in African sculpture, this figure has an elongated face with prominent cheekbones, arching brows, half-closed eyes set in sunken sockets, a high rounded forehead, and pursed lips. Her body is small and stooped, suggesting that the seat weighs heavily upon her. These features create a sense of sadness or suffering not typically seen in African sculpture, which tends to be fairly emotionless.

The Buli Master, named after a village in the eastern part of Democratic Republic of Congo where some of his works were acquired, is believed to have been active in the mid- to late nineteenth century. The sculptor has created a dynamic formal composition, building in volume and complexity from the base to the top. Her large feet, barely raised from the base of the stool, provide the foundation for the stool’s vertical support formed by her short sturdy legs, torso, and large oval head. The seat rests upon her coiffure and the tips of her fingers. The sense that she bears a heavy burden is reinforced by exaggerated flattened hands.

All royal stools are conceived of as replicas of an original seat of office given to the Luba king Kalala Ilunga. The Luba kingdom was said to have been founded by Kalala Ilunga, a heroic prince who overthrew his despotic uncle to establish a new dynasty of divine rulers. Leaders of the various Luba chiefdoms in the area have historically traced their descent from this founding ruler. Their exalted position within this sacred line of succession is expressed materially by the possession of royal insignia designed to bolster chiefly authority.
© 2006 The Metropolitan Museum of Art, New York (by permission)

Mary Nooter Roberts, Luba Art and Divination on Art and Life in Africa (University of Iowa)