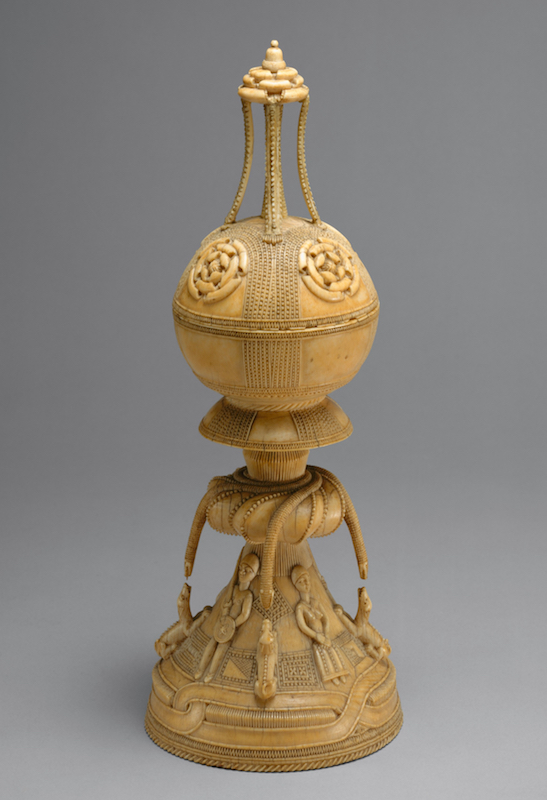 This magnificent lidded ivory saltcellar was carved by a Sapi sculptor working in what is now Sierra Leone. This work is part of a group of ivory artifacts created during the earliest period of exchange between Africans living south of the Sahara and Europeans. 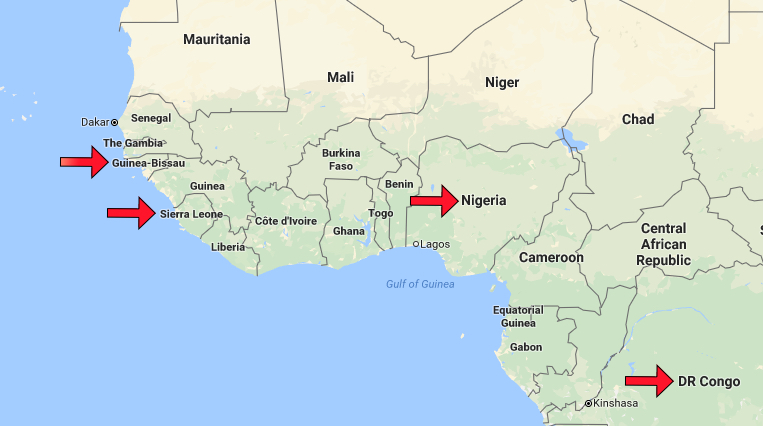 During the second half of the fifteenth century, journeys of exploration brought Portuguese navigators into direct contact with cultures of coastal western Africa. At a number of coastal centers in present-day Sierra Leone and Guinea Bissau, as well as Nigeria and Democratic Republic of Congo, the travelers encountered African carvers of considerable talent and professional skill. They commissioned African works in ivory for export as souvenirs of their travels or as gifts for the European nobility who financed their voyages. Many of the artifacts entered European princely collections, formed as cabinets of curiosities. These works, whose African origins had been forgotten until recent art historical research unearthed them, have come to be known as Afro-Portuguese ivories. 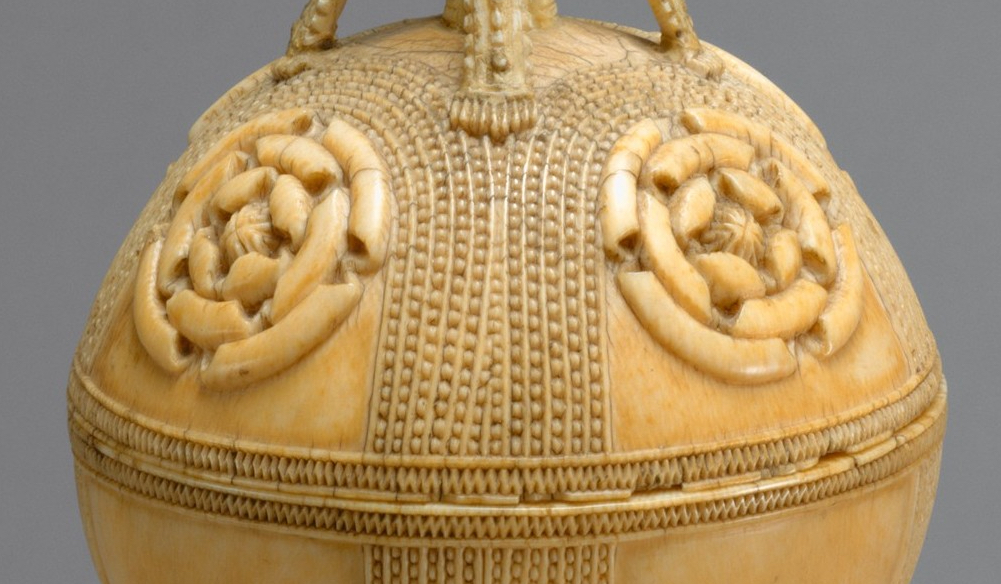 At the time, salt was rare and therefore very expensive in Europe. To be able to display this precious commodity in such a finely carved and elaborately detailed vessel was a symbol of wealth and prestige at the table of a wealthy Portuguese. Local artists are believed to have been shown European prototypes on which to base their creations.

This vessel’s form and some elements of its decoration recall European saltcellars. For example, an acorn nestled inside the stylized petals of a rose crowns the top of the container, while four rosettes carved in relief surround the upper part of the lid (above). Most of the designs, however, are distinctly African, reflecting Sapi artistic sensibilities. Four figures wearing local dress are sculpted around the base (below). Two are warriors bearing swords and shields, and two are women. Above them, curving around the disk of ivory, are four delicately carved snakes that drop down toward four dogs represented in a state of alarm with bared fangs, drawn-back ears, and bristling fur. Although the Sapi peoples have dispersed to other locales since the sixteenth century, traditions associated with contemporary peoples related to the Sapi, notably the Baga, provide insights into the meaning of such imagery. In Baga belief, snakes are identified with local water spirits, called Niniganné. The Niniganné are described as powerful beings with long, smooth hair and brilliant scales. They are believed to be capable of spanning two realms—the earthly and the spiritual—and are associated with waterways, wealth (in the form of clothing and metal), and danger. These attributes coincide with Sapi perceptions of the Portuguese seafarers, whose flowing hair and unusual attire may be compared to descriptions of Niniganné. Like the water spirits, the Portuguese visitors were regarded as powerful individuals with mystical abilities who traveled across the water bringing great riches, in the form of trade. They also brought danger, since, beginning as early as 1512, the Portuguese king required that ships returning from Africa be laden with slaves.

Ivory and Boxwood Carvings, 1450–1800 on the Metropolitan Museum of Art’s Heilbrunn Timeline of Art History