The Fang peoples of Gabon believed that ancestral relics held great spiritual power. Byeri was a Fang association devoted to the veneration of lineage ancestors and founders, leaders, and fertile women who made significant contributions to society during their lifetime. After death, their relics, particularly the skull, were conserved in cylindrical bark containers and guarded by carved wooden heads or figures mounted atop the receptacles.

The lustrous black surface of this carved female figure still glistens from repeated applications of palm oil used for ritual purification. The sculptor shaped this figure to illustrate the ability to hold opposites in balance, a quality admired by the Fang. He juxtaposed the large head of an infant with the developed body of an adult. The static pose and expressionless face contrast with the palpable tension of the bulging muscles and the projecting forms of the arms, legs, and breasts. These reliquary sculptures may be male or female and are not considered portraits of the deceased. They were often decorated with gifts of jewelry or feathers and received ritual offerings of libations, such as palm oil.

On the occasion of initiation into Byeri, the figures were removed from their containers and manipulated like puppets in performances that dramatized the raising of the dead for didactic purposes. During the early twentieth century, Fang reliquary sculpture began to be acquired by Western collectors, who admired the inspired interpretation of the human form. This particular work was formerly in the collections of two well- known modernist artists, the painter André Derain and the sculptor Jacob Epstein.

Fang people in Art and Life in Africa (University of Iowa) 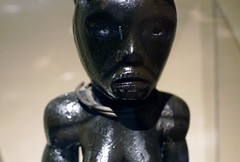 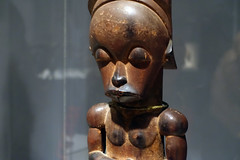 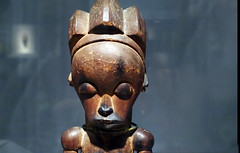 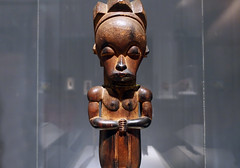