Sacred medicines and divine protection are central to the belief of the Kongo peoples (Democratic Republic of Congo). The Kongo believe that the great god, Ne Kongo, brought the first sacred medicine (or nkisi) down from heaven in an earthenware vessel set upon three stones or termite mounds.

A nkisi (plural: minkisi) is loosely translated as a “spirit,” yet it is represented as a container of sacred substances which are activated by supernatural forces that can be summoned into the physical world. Visually, these minkisi can be as simple as pottery or vessels containing medicinal herbs and other elements determined to be beneficial in curing physical illness or alleviating social ills. In other instances, minkisi can be represented as small bundles, shells, and carved wooden figures. Minkisi represent the ability to both ‘contain’ and ‘release’ spiritual forces, which can have both positive and negative consequences on the community.

A fascinating example of a nkisi can be found in a power figure called nkisi nkondi. A nkisi nkondi can act as an oath taking image which is used to resolve verbal disputes or lawsuits (mambu) as well as an avenger (the term nkondi means ‘hunter’) or guardian if sorcery or any form of evil has been committed. These minkisi are wooden figures representing a human or animal, such as a dog (nkisi kozo) carved under the divine authority and in consultation with an nganga or spiritual specialist who activates these figures through chants, prayers, and the preparation of sacred substances which are aimed at ‘curing’ physical, social or spiritual ailments. 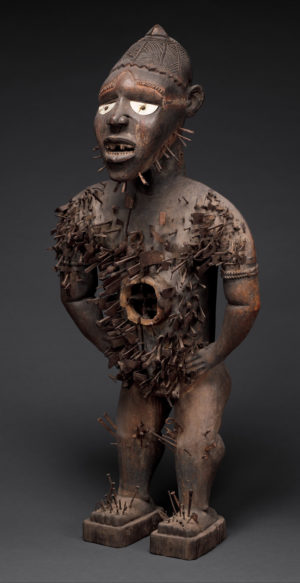 Nkisi nkondi figures are highly recognizable through an accumulation of pegs, blades, nails, or other sharp objects inserted into its surface. Medicinal combinations called bilongo are sometimes stored in the head of the figure but frequently in the belly of the figure, which is shielded by a piece of glass, mirror, or other reflective surface. The glass represents the ‘other world’ inhabited by the spirits of the dead, who can peer through and see potential enemies. Elements with a variety of purposes are contained within the bilongo. Seeds may be inserted to tell a spirit to replicate itself; mpemba or white soil deposits found near cemeteries represent and enlist support from the spiritual realm. Claws may incite the spirits to grasp something, while stones may activate the spirits to pelt enemies or protect one from being pelted.

The insertions are driven into the figure by the nganga and represent the mambu and the type or degree of severity of an issue can be suggested through the material itself. A peg may refer to a matter being ‘settled’ whereas a nail, deeply inserted, may represent a more serious offense such as murder. Prior to insertion, opposing parties or clients often lick the blades or nails, to seal the function or purpose of the nkisi through their saliva. If an oath is broken by one of the parties or evil befalls one of them, the nkisi nkondi will become activated to carry out its mission of destruction or divine protection. Europeans may have encountered these objects during expeditions to the Congo as early as the 15th century. However, several of these “fetish” objects, as they were often termed, were confiscated by missionaries in the late 19th century and were destroyed as evidence of sorcery or heathenism. Nevertheless, several were collected as objects of fascination and even as an object of study of Kongo culture. Kongo traditions such as those of the nkisi nkondi have survived over the centuries and migrated to the Americas and the Caribbean via Afro-Atlantic religious practices such as vodun, Palo Monte, and macumba. In Hollywood, these figures have morphed into objects of superstition, such as New Orleans voodoo dolls covered with stick pins. Nonetheless, minkisi have left an indelible imprint as visually provocative figures of spiritual importance and protection.

Nkisi Nkondi on Art Through Time.

“Technkisi: A Spiritual Connection with Technology” on The Metropolitan Museum.

Here is an active video note-taking activity about the nkisi nkondi video above.