One of the four greatest powers in the world 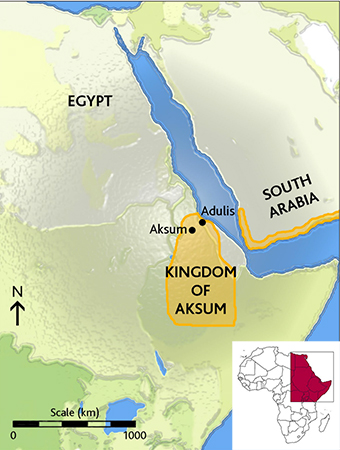 Aksum was the name of a city and a kingdom which is essentially modern-day northern Ethiopia (Tigray province) and Eritrea. Research shows that Aksum was a major naval and trading power from the 1st to the 7th centuries C.E. As a civilization it had a profound impact upon the people of Egypt, southern Arabia, Europe, and Asia, all of whom were visitors to its shores, and in some cases were residents.

Aksum developed a civilization and empire whose influence, at its height in the 4th and 5th centuries C.E., extended throughout the regions lying south of the Roman Empire, from the fringes of the Sahara in the west, across the Red Sea to the inner Arabian desert in the east. The Aksumites developed Africa’s only indigenous written script, Ge’ez. They traded with Egypt, the eastern Mediterranean, and Arabia.

Despite its power and reputation—it was described by a Persian writer as one of the four greatest powers in the world at the time—very little is known about Aksum. Written scripts existed, but no histories or descriptions have been found to make this African civilization come alive. 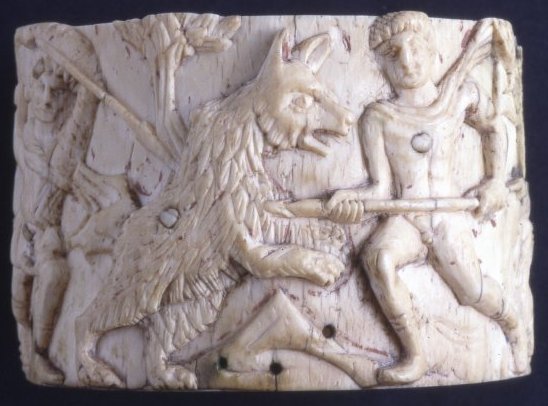 This pyxis (box), made in Alexandria (Egypt), depicts a goat; two men spearing a bear; a shepherdess with crook and man with pair of oxen. Pyxis, 5th century C.E., ivory and wood, 11.3 cm in diameter © Trustees of the British Museum

A counterpoint to the Greek and Roman worlds

Aksum provides a counterpoint to the Greek and Roman worlds, and is an interesting example of a sub-Saharan civilization flourishing towards the end of the period of the great Mediterranean empires. It provides a link between the trading systems of the Mediterranean and the Asiatic world, and shows the extent of international commerce at that time. It holds the fascination of being a “lost” civilization, yet one that was African, Christian, with its own script, coinage, and international reputation. It was arguably as advanced as the Western European societies of the time.

The society was hierarchical with a king at the top, then nobles, and the general population below. This hierarchy can be discerned by the buildings that have been found, and the wealth of the goods found in them. Although Aksum had writing, very little has been found out about society from inscriptions. It can be assumed that priests were important, and probably traders, too, because of the money they would have made. Most of the poor were probably craftsmen or farmers. In some descriptions, the ruler is described as “King of Kings” which might suggest that there were other, junior kings in outlying parts of the empire which the Aksumites gradually took over.There is evidence of at least 10–12 small towns in the kingdom, which suggests it was an urban society, but for descriptions of these there is only archaeological evidence. Little or nothing is known about such things as the role of women and family life.

Aksum embraced the Orthodox tradition of Christianity in the 4th century (c. 340–356 C.E.) under the rule of King Ezana. The king had been converted by Frumentius, a former Syrian captive who was made Bishop of Aksum. On his return, Frumentius had promptly baptized King Ezana, who then declared Aksum a Christian state, followed by the king’s active converting of the Aksumites. By the 6th century, King Kaleb was recognized as a Christian by the emperor Justin I of Byzantium (ruled 518–527) when he sought Kaleb’s support in avenging atrocities suffered by fellow Christians in South Arabia. This invasion saw the inclusion of the region into the Aksumite kingdom for the next seven decades.

Although Christianity had a profound effect upon Aksum, Judaism also had a substantial impact on the kingdom. A group of people from the region called the Beta Israel have been described as “Black Jews.” Although their scriptures and prayers are in Ge’ez, rather than in Hebrew, they adhere to religious beliefs and practices set out in the Pentateuch (Torah), the religious texts of the Jewish religion. Although often regarded by scholars/academics as not technically ‘”Jewish” but instead a pre-Christian, Semitic people, their religion shares a common ancestry with modern Judaism. Between 1985 and 1991 almost the whole Beta Israel population of Ethiopia was moved to Israel.

The Queen of Sheba and King Solomon are important figures in Ethiopian heritage. Traditional accounts describe their meeting when Sheba, Queen of Aksum, went to Jerusalem, and their son Menelik I formed the Solomonic dynasty from which the rulers of Ethiopia (up to the 1970s) are said to be descended. It has also been claimed that Aksum is the home of the Biblical Ark of the Covenant, in which lies the “Tablets of Law” upon which the Ten Commandments are inscribed. Menelik is believed to have taken it on a visit to Jerusalem to see his father. It is supposed to reside still in the Church of St Mary in Aksum, though no-one is allowed to set eyes on it. Replicas of the Ark, called Tabots, are housed in all of Ethiopia’s churches, and are carried in procession on special days.

Cite this page as: The British Museum, "The kingdom of Aksum," in Smarthistory, September 23, 2016, accessed January 29, 2023, https://smarthistory.org/the-kingdom-of-aksum/.