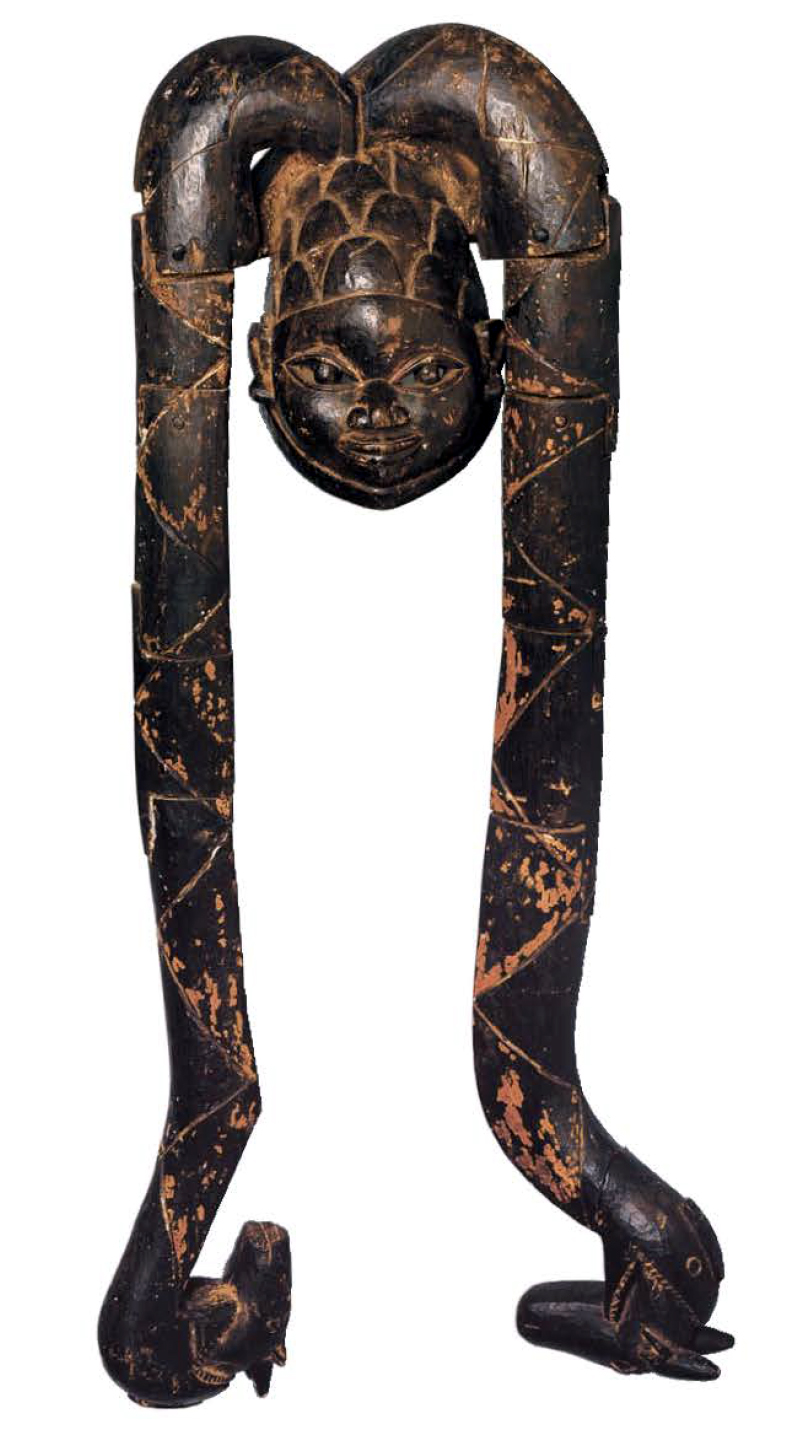 The masking tradition known as Gelede is believed to have originated among the Yoruba people of the Ketu region, in today’s Republic of Benin, sometime in the late eighteenth century. Gelede honors the spiritual powers of elderly women who are referred to as awon iya wa, or “our mothers.” Their powers are not limited to human fertility but extend to agricultural bounty, wealth, and human health, and are believed to be akin to those of the gods. In order to direct their potent energies positively, such elderly women must be appropriately honored.

Each year, at the beginning of a new agricultural cycle, Gelede performances are organized by the male and female titled elders of the Gelede society. While entertaining, and often ribald, the masquerades are a serious tribute to the contributions made by elderly women in order to maintain social order, preserve well-being, and reinforce cultural values. Numerous masquerades appear in sequence over a two-day period. The maskers, all male, wear sculpted wooden masks on top of their heads and, in some cases, carved wooden breasts and stomachs. The textiles used for their costumes are borrowed clothes of local women. The masked dancers perform in pairs, offering social and spiritual commentary through role recognition and satire. The elaborately choreographed dances are accompanied by an orchestra of drums and a chorus of male and female singers. The imagery of the masks used in Gelede address a range of subjects relating to all aspects of Yoruba society. Usually, the base of a Gelede mask is a human face. The calm expression indicates patience and self-control, highly valued characteristics of female role models. The imagery above the face may depict animals, objects, or humans that refer to a particular individual or situation in the community, or it may illustrate a popular proverb or song. Such imagery often serves as a metaphor, designed to reinforce positive behavior within the community. In this example, one of an original pair, the face is flanked by long curving snakes that are devouring antelopes. Representations of animals consuming other animals are depicted frequently on Gelede masks. They are allusions to competing spiritual or social forces and encourage other, less destructive means to resolve conflict.

This mask reflects the creative collaboration of two generations of sculptors from the same workshop. The face was sculpted by Ketu master Fagbite Asamu, an artist who is remembered for his innovative Gelede creations which included movable attachments that could be manipulated by the performer. On this example, the hinged extensions in the form of snakes were carved by Fagbite’s son, Falola Edun, who completed the work in 1971. The fluid forms of the serpents are composed of interlocking segments of wood secured by nails. Because a premium is placed upon innovation in Gelede performances, new designs are continually introduced into the repertory of forms.