Chinua Achebe’s celebrated novel Arrow of God examines the cultural complexities of the Igbo peoples in colonial Nigeria. Set in the early decades of the twentieth century, the book intimately addresses many nuances of Igbo beliefs, customs, and rituals, particularly in the context of British colonial rule, which was rapidly expanding in Nigeria in that era. The fateful interaction between two characters in the novel, Akukalia and Ebo, is one such instance of a close look at a crucial aspect of Igbo belief. Following a serious altercation, Akukalia insults Ebo by breaking Ebo’s ikenga. Devastated by the loss, Ebo promptly grabs his gun and kills Akukalia. Despite Ebo’s grave offense, the village elders cannot punish him, because under no circumstances does anyone in Igbo society have the right to defame, much less destroy, a man’s ikenga. This tragic incident described by Achebe, himself an Igbo, demonstrates the crucial role of ikenga in Igbo cosmology.

An Igbo man’s right hand is the hand of accomplishment because it is the primary agent of action, confronting and overcoming life’s challenges. Carved out of wood and anywhere from a few inches to about two feet tall, an ikenga symbolizes its owner’s right hand. When an Igbo male comes of age, he may ritually be offered an ikenga, which becomes not only his proud possession to be preserved and honored for the rest of his life, but is also an integral part of his identity as a unique individual. Signifying the owner’s potential for success and his control of his own fate, the object embodies his chi, his ndichie (ancestors), and ike (power).

In short, the man’s ikenga becomes the essence of his individuality. Yet at the same time, it also serves as an unequivocal marker of his commitment to his society. Though much less frequently than men, women may also possess ikenga. One of the largest ethnic groups in Nigeria, the Igbo live in the southeastern and southcentral regions of the country as well as in equatorial Guinea. Organized into acephalous (without centralized leadership) polities, each cluster of Igbo villages was traditionally ruled by a council of elders.

Men—and often women—of age, wealth, and status are still honored with a variety of titles and leadership positions. The titling tradition testifies to the strong Igbo belief in egalitarianism and individual success, and even the divine in Igbo cosmology often aids the material and spiritual achievements of individuals. The notion of chi is a case in point. The appearance of an ikenga

An ikenga is most commonly a seated male. Consider the ones from the University of Pennsylvania Museum of Archaeology and Anthropology, for example. The figures have two curled horns, and carry a knife or machete in his right hand (the hand of action) and a human head in his left hand (the hand bearing the outcome of the right hand’s action). The facial expression is aggressive, exposing sharp teeth. Rams are known for their strength and tenacity; they go into battle head first, and once two of them lock horns, they do not back down until one is defeated. The ram horns, therefore, represent the determination needed to face life’s hurdles. The knife, with its wedged blade, stands for the aggression with which challenges are met. At some point in the past, some of the Igbo groups practiced headhunting; heads of dead enemies were preserved in order to absorb their strength. Reminiscent of that ancient ritual, the human head in the left hand of the figure is a reminder of the prize of one’s actions and of one’s mastery over his opponents. When the owner dies, his ikenga is ritually broken into pieces and buried with him.

The diversity of ikenga

Far from the stereotypical notion of a monolithic “tribe” fostered by colonialism, the Igbo have great internal diversity. There are significant differences in visual culture, rituals, and customs across Igboland, and the tradition of ikenga is no exception. In some Igbo communities, for instance, owners of ikenga participate in an annual ikenga festival, where ikengas are honored with the belief that if appeased, they would bring success and fortune to their owners. Furthermore, while the attachment of each ikenga to a specific individual may account for the variety in its details and the degree of its embellishment, differences can also be attributed to nuances of local beliefs and practices, or other circumstances.

Occasionally, for example, lack of success in life may lead an owner to reject his existing ikenga for a new one. A newly titled man may choose to replace his older ikenga with a newer one that sits on a stool meant for a title-holder; a titled man’s staff may replace the knife in the right hand, while the left hand may carry an elephant tusk instead of the usual human head. What is more, some of the carvings are abstract, with no distinct anthropomorphic features. These are a specific type of ikenga known as ikenga mmuo, representing the ephemeral world of chi, while the type resembling a human, called ikenga madu, signifies the physical existence of an owner. Also, while most ikengas have curled horns, some have straight ones, based on an owner’s individual identity.

It is likely that a typical ikenga would appear exotic and mysterious to anyone unfamiliar with Igbo culture. It is therefore not difficult to understand that when Christian missionaries first arrived in Igboland to proselytize among its people, this wooden figure, with its combination of human and animal features and its aggressive expression, appeared to them entirely alien to Christian values. Yet when the Western world learned to value artifacts from Africa as art in the early decades of the twentieth century, their exoticism and mystery were precisely some of the properties that made the objects attractive collectibles.

In Igbo cosmology, however, ikenga still prominently upholds the value of individual enterprise in a person’s interaction with the world. The scenario of the destruction of an ikenga in Achebe’s novel underscores that crucial role of ikenga, as much as it sheds light on the dilemma the Igbo faced when forced to negotiate between their own worldviews and Christian values imposed on them by colonial powers.

Ihediwa Nkemjika Chimee, “The Ikenga, as Emblem of Greatness in the Cosmology of the Igbo of Southeastern Nigeria“, 2014 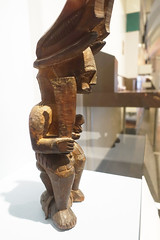 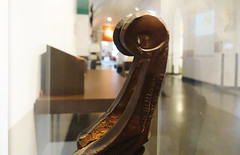 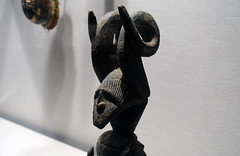 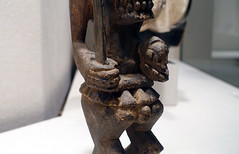 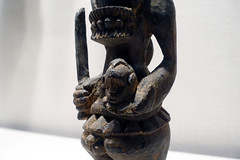 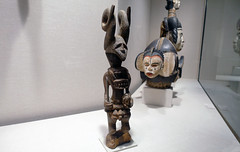 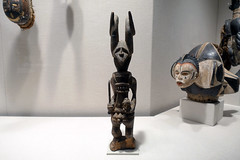 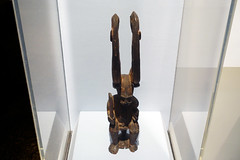 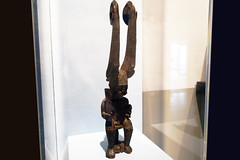 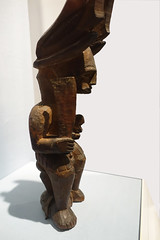 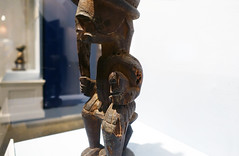 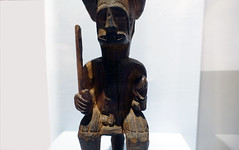