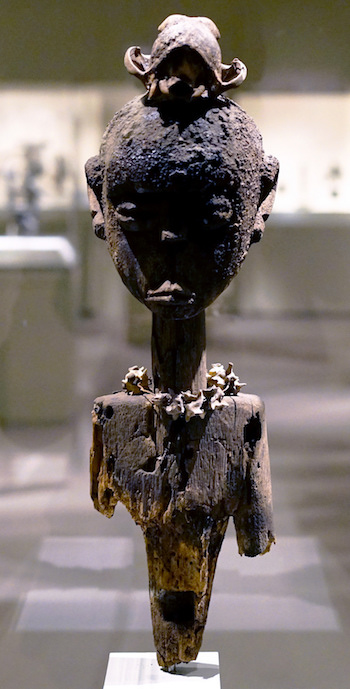 This bust once served as a protective device, or bocio, ensuring its owner’s health and well-being, and safeguarding against potential harm. Ending in a pointed stake, it was hammered into the ground. Unlike the sumptuous bocio made for Fon kings, this kind of art is prescribed by diviners for use by nonroyal individuals. The carvings are most often made by nonspecialists for their family members and then empowered by a diviner who adds various organic substances. The most powerful bocio are made by ritual specialists such as diviners, called bokonon, and priests associated with the deities known as vodun.

The unrefined carving style and the rough surfaces combine to create an aesthetic of raw energy. The massive head is carved with faces on either side. The larger, more dominant head faces front, its inscrutable gaze and pursed lips suggesting intense concentration. On the other side is a smaller, skull-like face whose otherworldly gaze is accentuated by its asymmetrical, empty eye sockets. The disproportionately large head underscores the centrality of physical perception, while the presence of two sets of eyes suggests a state of heightened vision and watchfulness.

Plant and animal materials give the work supernatural powers. A dog’s skull crowns the head, and a garland of serpent bones encircles the neck. Such materials have symbolic significance. The presence of the skull of a dog, an animal praised for its protective skills, reinforces notions of guardianship and surveillance central to the efficacy of this object. Snakes call to mind poisonous attacks.

The resulting work functions proactively as a defense mechanism, responding to the varied needs of its owner. Uses may include the detection of thieves, protection from sorcery, and the manipulation of weather. As a surrogate for the individual who commissioned it, a bocio serves as a decoy, drawing harmful forces away from its owner. Operating at the intersection of the spiritual and human realms, bocio are strategically situated along paths, roadways, agricultural fields, and near family compounds, or placed inside homes and shrines.