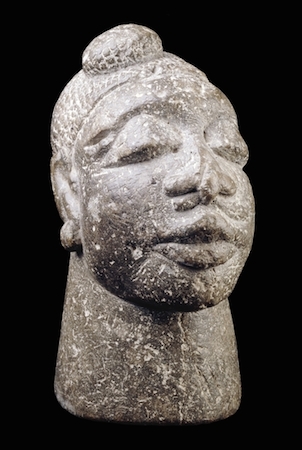 Numerous enigmatic sculptures carved in stone have been found over a wide area of Sierra Leone and western Liberia. Most of these sculptures are in human form. The Mende people who occupy the largest area where they have been discovered call them nomoli meaning “found spirit”; they are characterised by their bulging eyes and flaring nostrils.

The Mende regard them as “rice gods” and make offerings to them to increase their harvest yields. Other sculptures associated with the Kisi people, known as pomdo, are more varied in form. They are viewed as ancestor figures and are placed in shrines. Little is known about the age, use or origins of these sculptures. They have been found accidentally by local farmers buried in the earth or in waterways, and by diamond miners.

Larger, pedestal heads such as this one, appear to form a sub-group of the figures described above. This magnificent steatite head is rendered in a naturalistic style. It stands on a solid pedestal base with its head tilted majestically backwards. The elaborate hairstyle with top knot and the representation of earrings is beautifully captured. Other heads of this type are carved with beards or moustaches and some are depicted wearing nose-rings. Such attributes suggest that these heads represent people of status, possibly chiefs or community leaders.

Portuguese accounts from the early seventeenth century describe chiefs with elaborate hairstyles and wearing gold rings in their nose and ears but there is no mention of an active stone carving tradition at this time. The sculptures bear stylistic similarities to ivory salt cellars produced by Sapi artists for European clients between the late fifteenth and early sixteenth centuries.

Scholars currently believe that some of these stone sculptures may have been made prior to the arrival of Europeans on the coast in 1463.