This massive headdress is an example of a regional artistic tradition that dates to at least 1886 and possibly to the early seventeenth century. Among Baga subgroups the headdress is referred to variously as D’mba or Yamban, an abstract concept personifying local ideals of female power, goodness, and social comportment.

Carved from a single piece of wood, this work takes the form of a large head and slender neck supported by a yoke with four projecting legs. Flat, pendulous breasts signify that the subject is a mature woman who has nursed many children.  She is distinguished from ordinary Baga by her intricately braided coiffure with high central crest, a hairstyle associated with Fulbe women, who are renowned for their physical beauty. This coiffure is also a reminder of cultural origins, as the Fulbe live in the Futa Jallon mountains, the ancestral homeland of the Baga people. Incised linear patterns representing scarification marks decorate her face, neck, and breasts. Such monumental structures, carried on the shoulders of the performer, often weigh more than eighty pounds. In its original context, the headdress would have had a thick raffia skirt attached to the bottom of the yoke. A shawl of dark cotton cloth, imported from Europe, would be tied around the shoulders, hiding the legs of the yoke.

The ideals of womanhood expressed symbolically by the strong forms of the headdress are reinforced by the movement of the male dancer, who communicates a model of virtuous behavior for Baga women. Performances documented in the 1990s describe the dramatic entrance of the masquerader in a central plaza, preceded by a processional line of drummers. Despite its unwieldy size, the headdress is manipulated skillfully by the dancer, whose movements are alternately composed and vigorous. As the dancer twirls to the accompaniment of drums, the assembled audience of male and female onlookers participates actively. Some reach to touch the breasts of the headdress, affirming its blessings of fertility, while others throw rice, symbolizing agricultural bounty. Songs prescribing proper social behavior are led by women who are joined in the chorus by men. Beginning at sunrise, the celebration continues through sundown and sometimes over the course of many days. Historically, such masks were used in dances held at planting times and harvest celebrations, as well as at marriages, funerals, and ceremonies in honor of special guests. Following Guinea’s independence from France in 1958 and its adoption of a Marxist government, the tradition was suppressed by Muslim leaders and state officials. In the 1990s, the lifting of decades of censorship was followed by a popular revival of earlier art forms. In Baga society, D’mba (or Yamban) now appears publicly on occasions marking personal and communal growth, including marriages, births, and harvest festivals, as well as celebratory occasions such as soccer tournaments.

Baga peoples from Art and Life in Africa (University of Iowa) 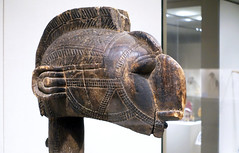