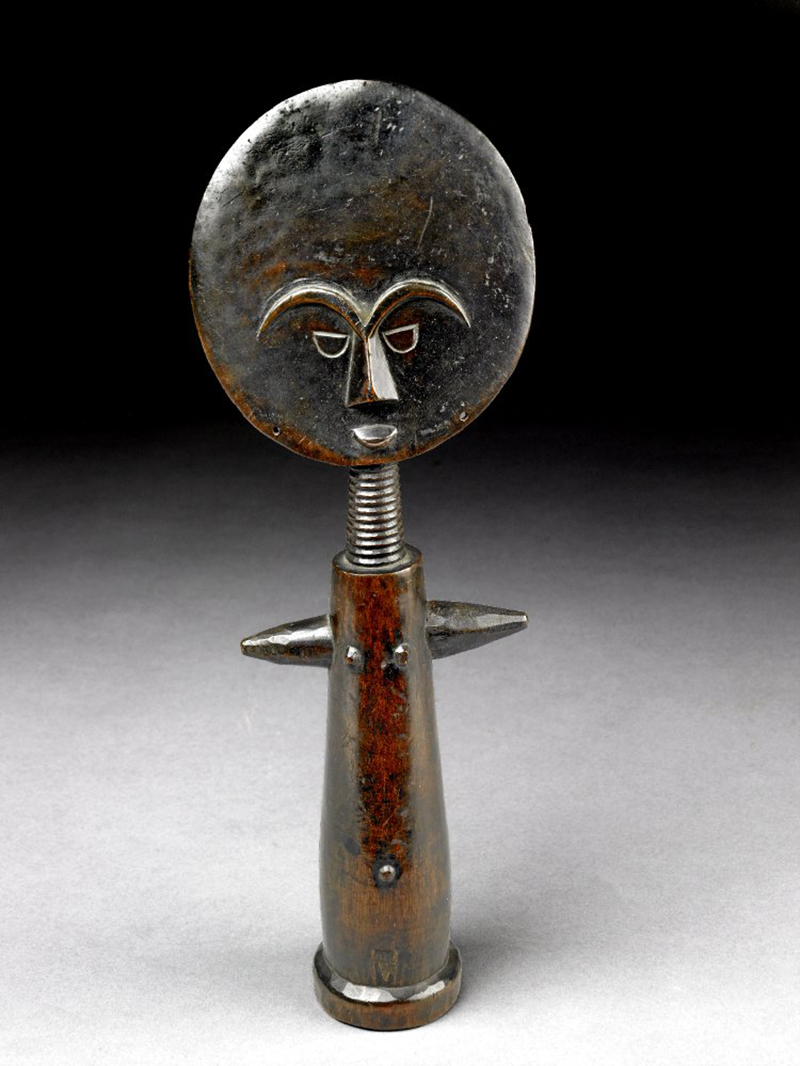 According to Akan myth, in the distant past a woman named Akua could not conceive. Akua sought first the spiritual reason for her infertility. She went to a diviner. He told her to commission a carver to create for her a wooden child and to care for that child as though it were her own. Akua did as she was told and within a few months, she conceived.

Among the Akan peoples, women who had trouble becoming pregnant might utilize one of these figures in the same way Akua did, if a diviner—after ritual prophecy—ascertained that it might be helpful. A carver would then create a figure for her and she would carry it on her back, offer it symbolical food and drink, and honor it on a shrine in her home until she conceived a child (ba). The figure could be gifted to another female family member if she, too, sought spiritual help to bear a child.

Akua’ba figures were important fertility aids among Akan-speakers in Ghana in the past. They depict an abstracted female form in wood and were created by male carvers.

While this figure is called Akua’ba (Akua’s child), it is clearly not meant to resemble a child. Rather, it depicts a highly abstracted and idealized woman in the prime of life (example above left). African art almost always depicts figures in their prime. This time, just after puberty, when young people are generally healthy, strong, initiated, and fertile, is when humans are most ripe with potential—they have the knowledge to successfully pursue adulthood and the physical maturation to marry and procreate. For new parents, this is the stage one hopes for one’s child, especially since high infant and childhood mortality rates remain a formidable reality. The figure is also always female, since  Akan culture is matrilineal. While meant to convey the prime of life, the akua’ba is also quite abstract. Her body has been reduced to a tubular form with small arms, a ringed neck, and a large, flat head. Some akua’ba also have a rectangular head and more recent forms include a more naturalistic body (example right). By emphasizing certain features, the artist has communicated the Akan ideal of female beauty. Her large, rounded forehead, understood as the place where knowledge resides, suggests the wealth of knowledge and intellectual maturity this child should have. Her ringed neck is intended to denote rolls of fat. Extra body fat at this lifecycle state suggests that the young woman is full-figured and capable of baring healthy children. Lastly, her high, protruding breasts suggest a woman who has not yet bore and nursed children. The akua’ba therefore demonstrates three important qualities of womanhood (wisdom, girth, and the prime of life) that relate to her physical and mental abilities.

Due to their unique look and portable size, akua’ba figures have become marketable tourist items and are now part of the Western visual vocabulary. Images of akua’ba have become generalized icons of Africa in commercial settings and it is common to find them depicted in jewelry, greeting cards, print ads and mass media (one is featured on the mantel of the television sitcom Will and Grace). Taken out of the Akan context, altered by Western tastes (which might add beads and paint), and marketed as a universal symbol of Africa, the akua’ba figure is now part of Western popular culture.