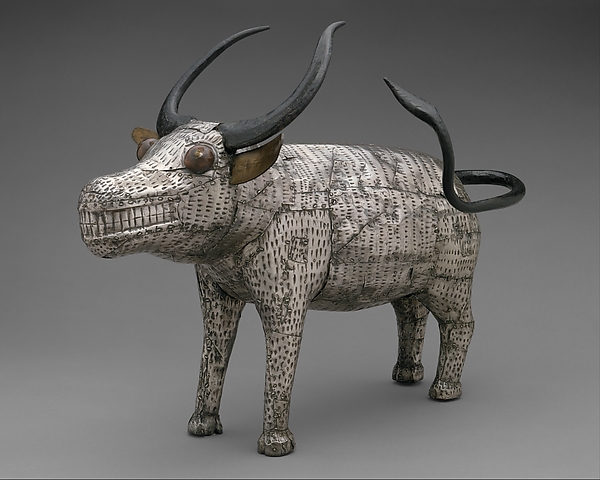 Royal works of art, like this silver buffalo, were made by members of the Huntondji family, who served Fon kings as jewelers and smiths since the eighteenth century. Though small in size, this shimmering silver creature radiates strength and determination. Bulging eyes, bared teeth, black curved horns, cocked ears, and swishing tail create this effect. Its eyes, horns, and tail are made from iron, a material associated with the Fon war god, Gu. The forest buffalo was an emblem of the Fon king Guezo, who ruled Dahomey (modern Republic of Benin) from 1818 until 1858. The qualities associated with a ruler’s emblem—in the case of the buffalo, strength, enduring memory, and royal legacy—were seen as defining a king’s reign. Although he came to power by usurping the throne of his older brother, Guezo is recalled as an important leader who unified the diverse constituencies of the kingdom.

Symbols of Fon kings were determined in a divination ceremony known as fa, which predicted the nature and character of each king’s reign. The buffalo emblem is one of 256 different fa divination signs, which were represented in a variety of artistic media created to support and enhance the king’s authority. Sculptural forms, like this example, in addition to functioning as royal symbols, also served as bocio, empowered objects that provided protection to the king. Placed in palace shrines where they served as the focus of prayer, these works were given potency through the presence of powerful substances in their interiors. Royal bocio were also displayed during ceremonial processions and transported to battlefields during times of war. To create this buffalo figure, the sculptor sheathed a solid wooden core with very thin pieces of silver. He tacked these pieces to the surface in individual sheets, creating a patchwork effect. Then he finished the surface with hatching marks to simulate hide and incised vertical lines for the large, bared teeth. The sculptor’s technique was a clever one, because silver was a luxury material derived primarily from European coins. The artist’s technique of encasing wood in sheet metal maximized the visual effects of a costly material without using the large quantities of metal required for lost-wax casting.

The Fon kingdom of Dahomey, founded in the early seventeenth century, was an important regional power renowned for its strong monarchy, military prowess, and impressive court arts. Dahomey’s influence expanded in the eighteenth century with the capture of the port city of Ouidah. From this coastal center, the kingdom participated in lucrative trade with Europeans, growing prosperous first by serving as a middleman in the Atlantic slave trade and, later, by selling palm oil. French colonization and the subsequent abolishment of the institution of kingship led to the fall of Dahomey in the late nineteenth century.
© 2006 The Metropolitan Museum of Art, New York (by permission)