Until the late 19th century, one of the major powers in West Africa was the kingdom of Benin, in what is now southwest Nigeria. When European merchant ships began to visit West Africa from the 15th century onwards, Benin came to control the trade between the inland peoples and the Europeans on the coast. The kingdom of Benin was also well known to European traders and merchants during the 16th and 17th centuries, when it became wealthy partly due to the slave trade. These men took part in the expedition made by the British in 1897. In the background, you can see the palace roof with a snake made of brass slithering down it. Photos like this one are the best guide we have to know what the palace of Benin looked like. Robert Allman, 1897, photographic print (The British Museum)

When the British tried to expand their own trade in the 19th century, the Benin people killed their envoys. So in 1897, the British sent an armed expedition which captured the king of Benin, destroyed his palace and took away large quantities of sculpture and regalia, including works in wood, ivory and especially brass. Some of these objects came from royal altars for the king’s ancestors, but among them were a large number of cast brass plaques made to decorate the wooden pillars of the palace. These had been left in the palace storerooms while part of the palace was being rebuilt. As it later emerged, most of them were probably made between about 1550–1650. The people and scenes that the plaques depict are so many and varied that they give a vivid picture of the court and kingdom of that time. The plaques were most sought after and were bought by museums across Europe and America—you can see them at the British Museum, in Chicago, Vienna, Paris and a large collection can be viewed in Berlin.

The arrival and reception of the bronze plaques caused a sensation in Europe. Scholars struggled to understand how African craftsmen could have made such works of art, proposing some wild theories to explain them. Quickly, however, research showed that the Benin bronzes were entirely West African creations without European influence, and they transformed European understanding of African history. When the son of the deposed king revived the Benin monarchy in 1914, now under British rule, he did his best to restore the palace and continue the ancient traditions of the Benin monarchy. Because these traditions are followed in the modern city of Benin, it is still possible to recognize many of the scenes cast in brass by Benin artists about five hundred years ago.

As decorations for the halls of the king’s palace, the plaques were designed to proclaim and glorify the prestige, status, and achievements of the king, so they give an informative but very one-sided view of the kingdom of Benin. They do not show how the ordinary people lived in the villages outside the city as farmers, growing their yams and vegetables in gardens cleared from the tropical forest. Nor do they show how most of the townspeople lived, employed in crafts such as the making of the brass plaques themselves. And most striking of all, there are no women or children shown in the plaques, which means that more than half of the people of the king’s court are not shown.

Many of the brass plaques from the king’s palace show images of Portuguese men, whose costumes indicate that they were made during the 16th and 17th centuries. Although Benin had no gold to offer, they supplied the Portuguese with pepper, ivory, leopard skins, and people, who were taken as slaves to work elsewhere in Africa and in the Portuguese colonies in Brazil. Many of these people were captives taken in the wars in which the Benin people conquered their neighbors far and wide and made them part of the kingdom, or they were sent by the conquered local chiefs as a tribute to the king.

A Smarthistory video on imagery in Benin plaques.

Learn about Benin Bronzes from the British Museum. 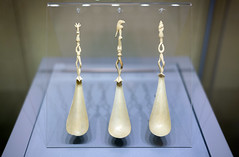 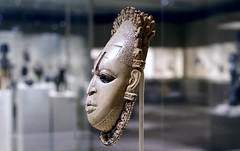 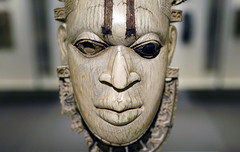