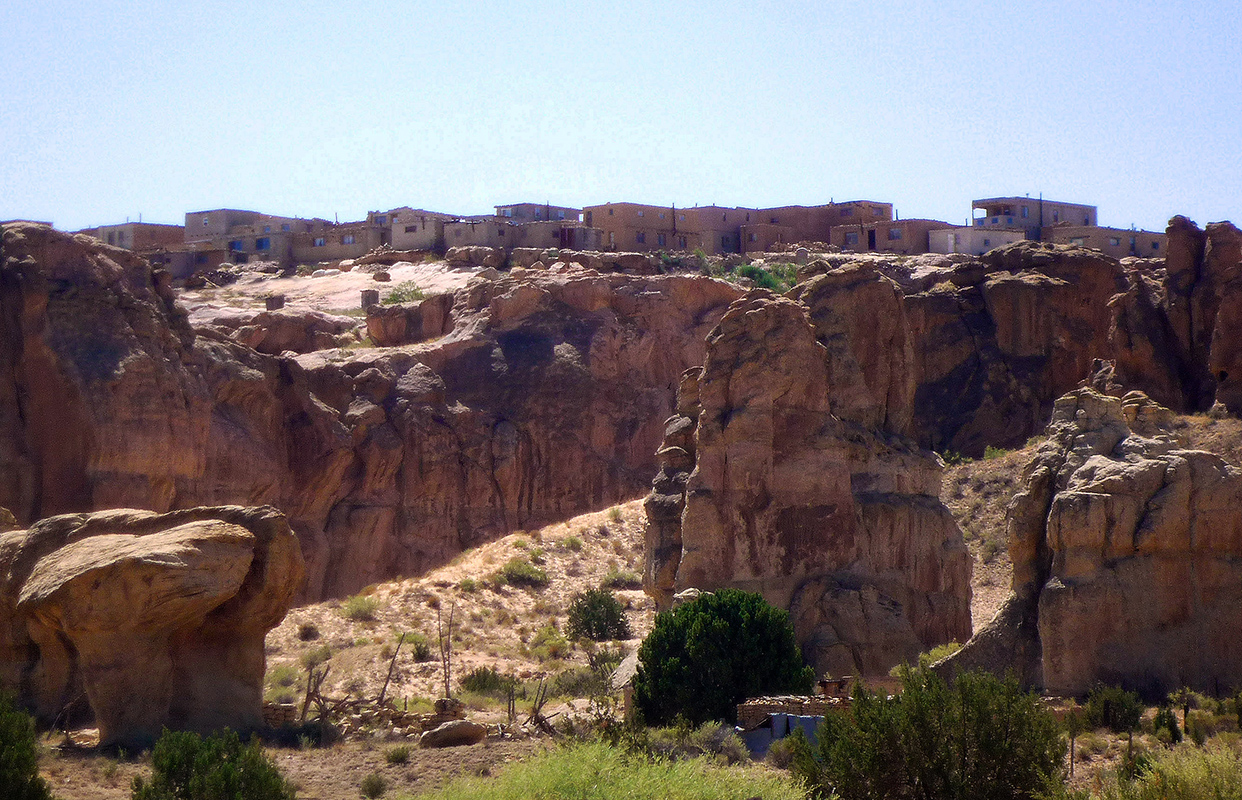 Stunning and dramatic, Acoma Pueblo is magnificent to visit not only for its spectacular location, but also because it is home to one of the best-preserved early mission churches in the United States. Standing on the edge of Acoma Pueblo (referred to as Sky City), one can see vast panoramas of the New Mexican landscape.


Acoma sits on a mesa—a flat-topped hill with steep sides—about 360 feet above sea level, and until the mid-20th century, the only access to the Pueblo was via a narrow stone staircase carved into the mesa itself (pueblo is the Spanish word for a town or village). The location of the Pueblo is imposing and impressive, and it is easy to grasp why so many described it as impregnable. In the past, its elevated location aided in protecting it from invaders. Acoma Pueblo is believed to be one of the oldest continuously inhabited communities in the United States. 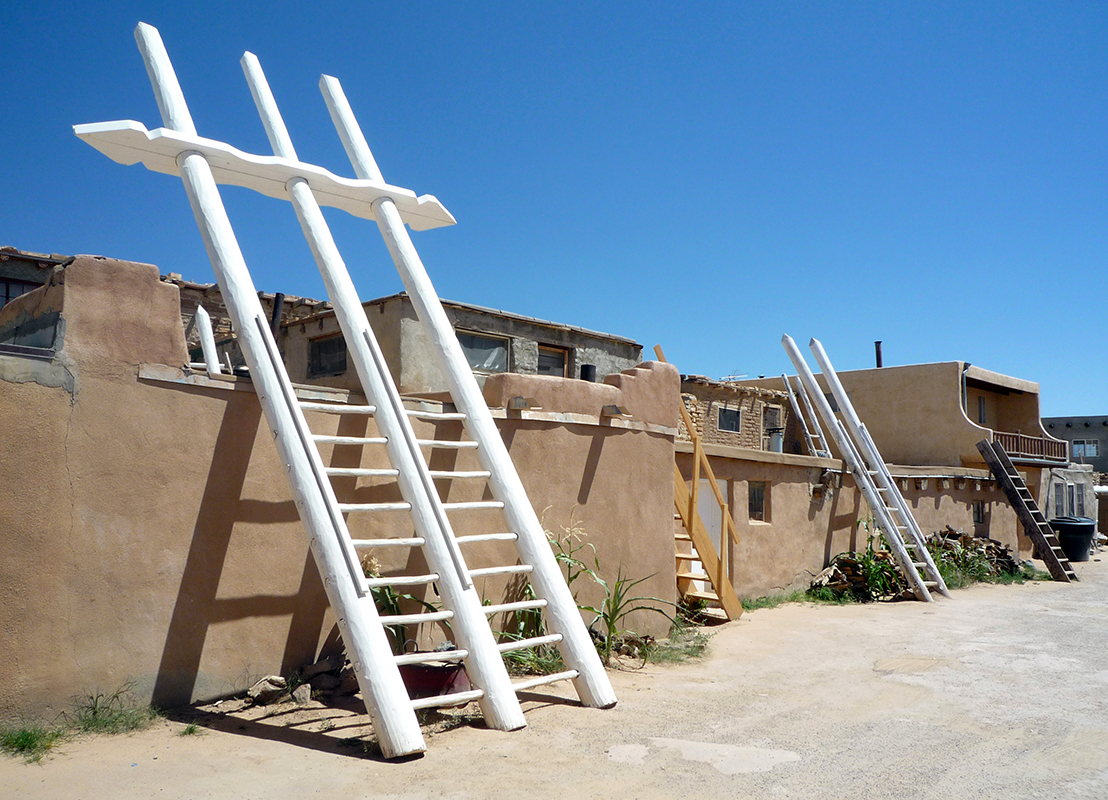 A city in the sky

The Pueblo is filled with dwellings ranging from one to two stories, all fashioned in adobe (mud-brick). The tallest and largest structure is the mission church of San Esteban del Rey, built between 1629 and 1642. A Spanish Franciscan friar named Juan Ramirez directed the construction of the church in 1629. The Franciscans are mendicant friars that helped to convert the peoples of modern-day New Mexico beginning in the sixteenth century. The practice of building missions for the purpose of conversion began soon after Spaniards defeated the Mexica (often called the Aztecs) in their capital city of Tenochtitlan (what is today Mexico City) in 1521. The Spanish established the viceroyalty of New Spain, which eventually comprised parts of the southwestern United States, Mexico, Central America, Spain’s Caribbean colonies, and the Philippines. What is a viceroy and a viceroyalty? 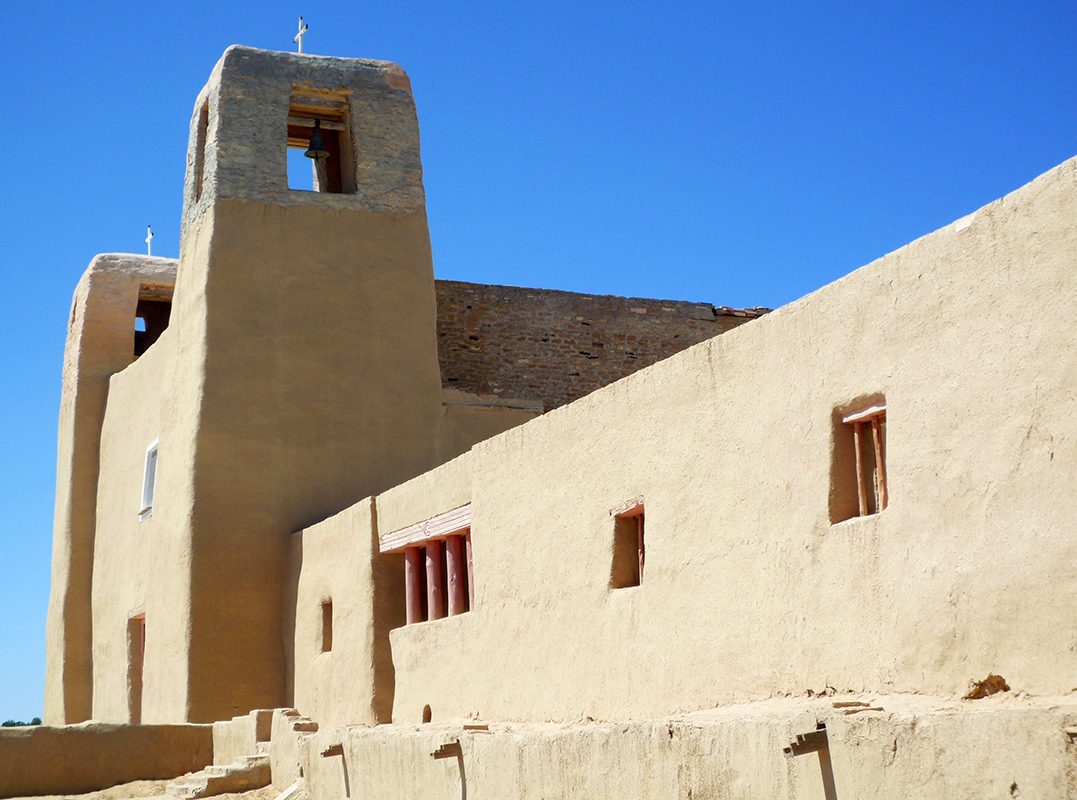 The church of San Esteban del Rey is based on missionary churches found in Colonial Mexico, but combines local Indigenous techniques and architectural elements. Because it was the first mission built in New Mexico, it became the model for many others erected in this area.

It is a single nave church—it has no transept (or crossing), and is approximately 150 feet long and 40 feet wide. Typical of other mission churches of this era in the Spanish viceroyalty, it has a cloister (a covered walkway surrounding an open space) that may have been used to instruct Indigenous converts, an atrium (an open courtyard in front of the church), and an elevated open-balcony chapel. The walled atrium yard also functions as a cemetery, called a campo santo, in front of, and to the side of, the church. 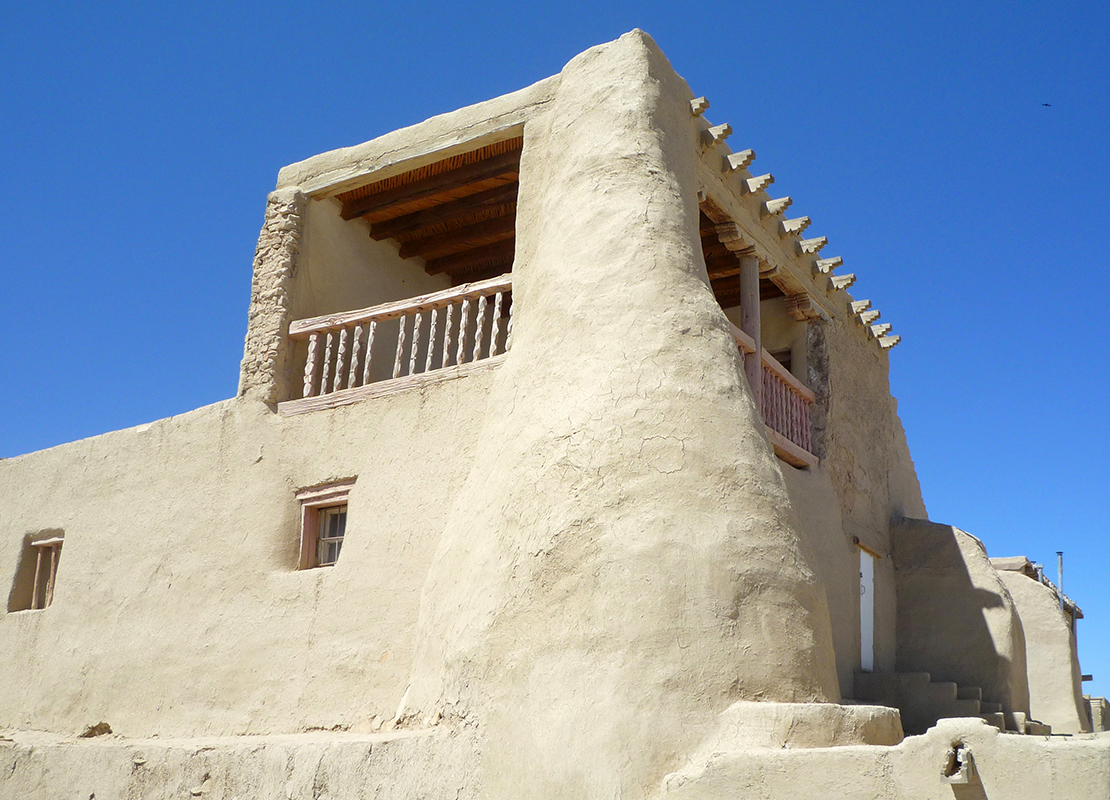 The Spanish in New Mexico

Spaniards had two primary interests for desiring missions like the one at Acoma in New Mexico—to convert peoples to Christianity and to protect mines in northern Mexico. Led by Francisco Vazquez de Coronado, the Spanish arrived in the area around 1540. In 1542, New Mexico and Arizona were claimed for Spain, but the geographic regions remained largely unsettled because of the harsh conditions and lack of water. The Spanish king, Philip II, officially authorized settlement of New Mexico in 1583, but it was not until 1598 that Juan Perez de Oñate officially claimed this region for Spain.

Franciscans arrived at Acoma in 1598. At first, the peoples of Acoma defeated the Spaniards, but in 1599 the Spaniards were successful after a strategic attack. They claimed St. James (Santiago), appeared on horseback brandishing a sword and intervened to help them conquer Acoma. 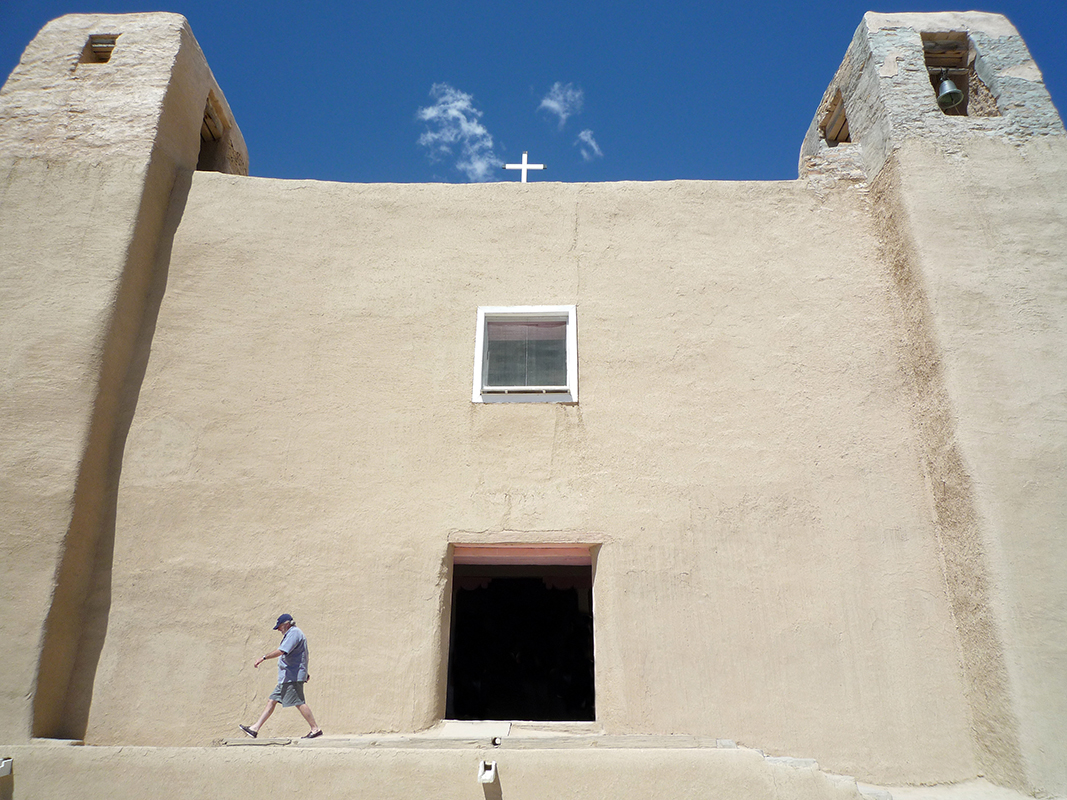 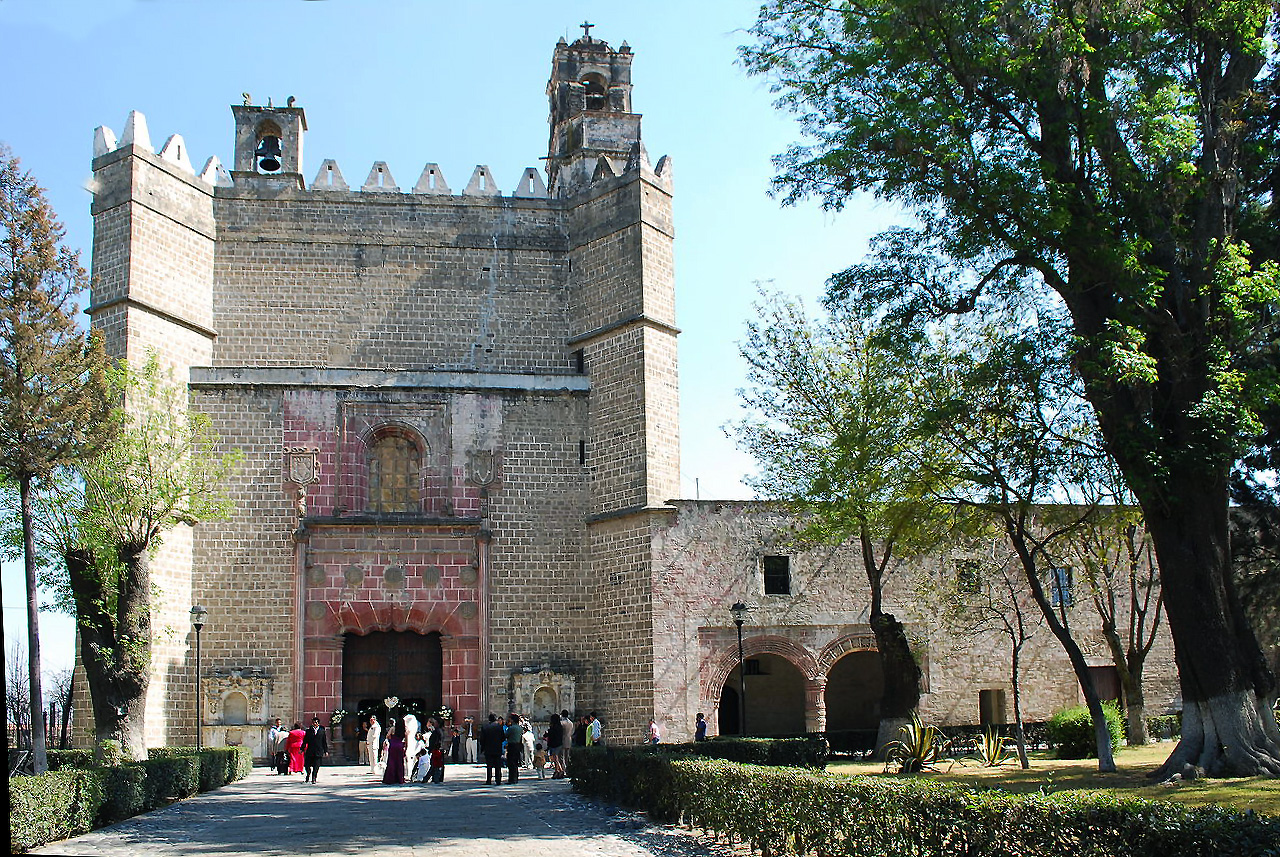 The church’s unadorned adobe façade is stark and austere, which is different from other Franciscan mission churches such as San Miguel in Huejotzingo, Mexico (in the state of Puebla). San Esteban del Rey has two bell-towers framing a rectangular central area and an elevated open balcony chapel above the main entrance. This elevated space allowed friars to preach to people in the atrium outside the church, and so provided both practical and spiritual functions. Any priest in the open chapel stood higher than any new converts, suggesting he was closer to God and to Heaven.

San Esteban del Rey’s massive adobe walls—bricks made from a mix of clay and straw—need continuous maintenance. In places the walls are seven feet thick, keeping the interior cool during the hot New Mexican summer, but also warm when the temperature drops. The heavy adobe construction limits the number of windows in the church structure. Small windows appear high above the ground, allowing little light into the church interior. The thick adobe walls and dark interior add a sense of awe and mystery to the space, especially as you pass through the main door from outside. You immediately know you have entered a holy space. 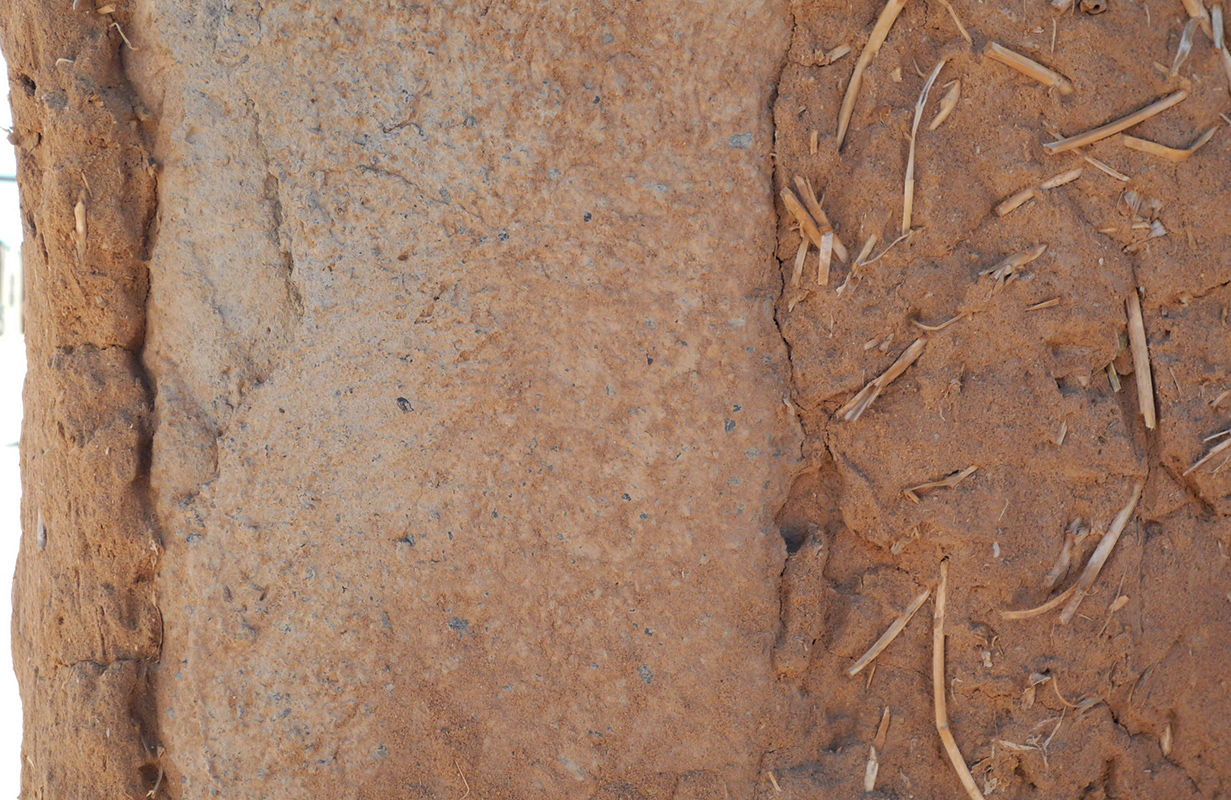 View of adobe wall (note that straw is visible to the right), Acoma Pueblo

The thick unadorned walls, interrupted by only a few windows, gives the façade an imposing quality. Some scholars describe it as having a militaristic or defensive appearance, yet there are no crenellations or other militaristic motifs like the ones we find on Central Mexican mission churches such as Huejotzingo. It is unclear whether San Esteban del Rey actually functioned as a fortress or if this impression was intended to symbolically convey the impression that the church was the stronghold of God.

To build the church, people gathered materials and then transported them up to the top of the mesa. The vigas (wooden beams), for instance, were brought from the San Mateo Mountains—some of which were considered sacred—and which are about thirty miles north of Acoma. This demonstrates the substantial labor required to construct the church. 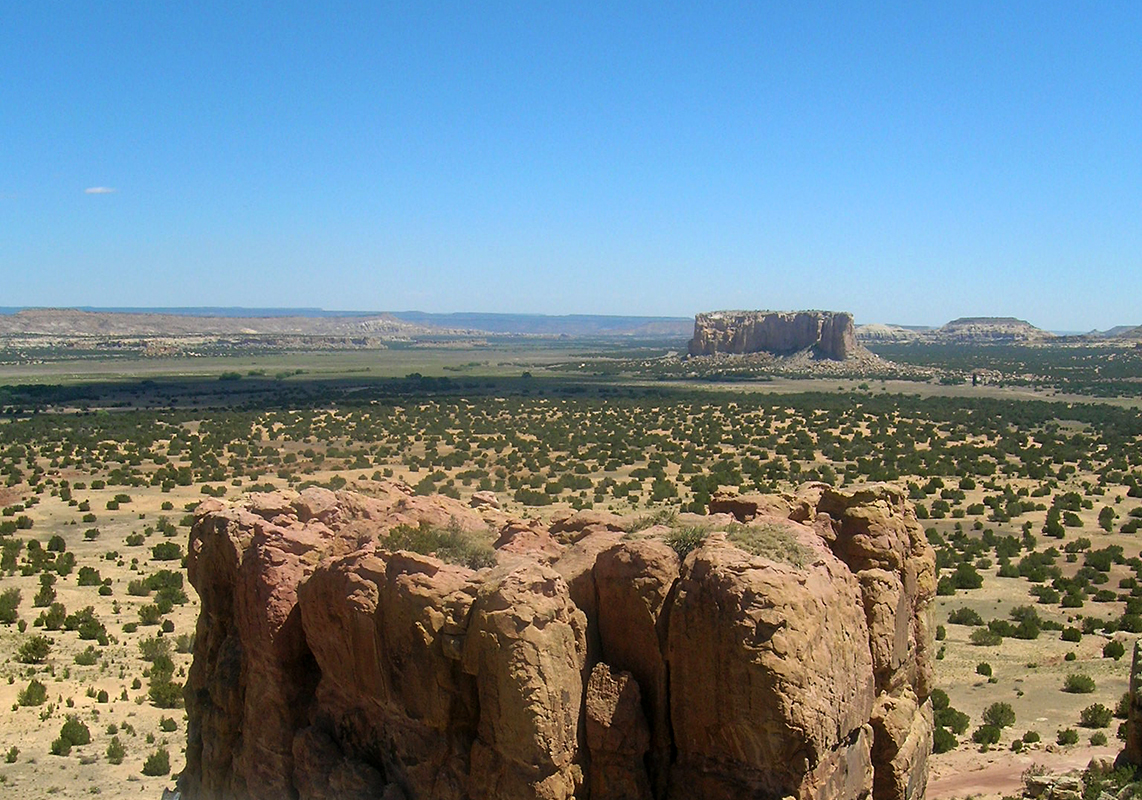 The church’s interior is simple like the outside. You’ll need to imagine what it looks like because interior photos are forbidden. There are no arches, domes, or stoneworking; instead, there are flat ceilings with vigas over forty feet long. The nave is narrow, due in part due to the use of adobe since it can’t hold as much weight as stone.

Packed earth covers the floor. A raised sanctuary demarcates the holiest space within the church. Some of the windows shine light on the altar, literally highlighting its importance. An altarpiece stands in the church’s raised sanctuary. Originally the interior was painted with frescoes, which were repainted often. Today sacred symbols like rainbows, clouds, and corn are visible. These symbols attest to the syncretic Catholicism practiced at Acoma, the result of Puebloan and Christian sacred ideas and practices becoming entangled over time.

The original interior frescoes were whitewashed likely as a result of the Pueblo Revolt (1680–92), a period during which many missions were destroyed and missionaries like the Franciscans killed or expelled. Yet San Esteban del Rey survived and it remains a stunning testament to the events that shaped this area during the sixteenth and seventeenth centuries.
Additional resources:
Most of the photographs in this essay were taken by Dr. Steven Zucker and can be found here.
Edward Proctor Hunt, The Origin Myth of Acoma Pueblo (Penguin Classics, 2015)
Ward Alan Minge and Simon Ortiz, Acoma: Pueblo in the Sky (University of New Mexico Press, 1991). 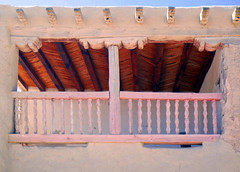 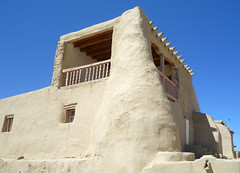 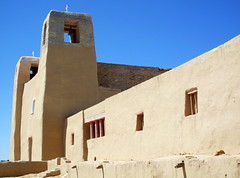 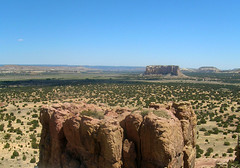 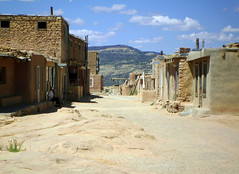 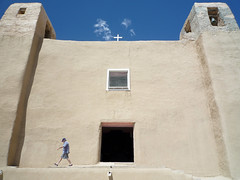 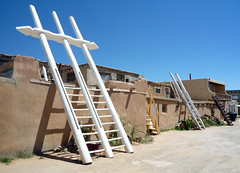 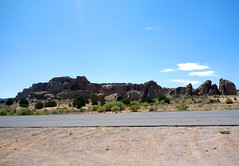 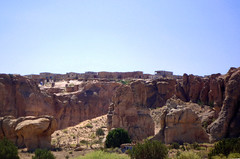