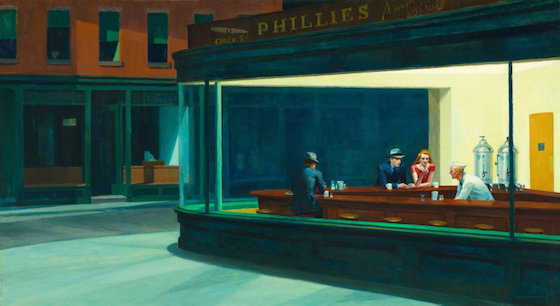 In place of meaningful interactions, the four characters inside the diner of Edward Hopper’s Nighthawks are involved in a series of near misses. The man and woman might be touching hands, but they aren’t. The waiter and smoking man might be conversing, but they’re not. The couple might strike up a conversation with the man facing them, but somehow, we know they won’t. And then we realize that Hopper has placed us, the viewer, on the city street, with no door to enter the diner, and yet in a position to evaluate each of the people inside. We see the row of empty counter stools nearest us. We notice that no one is making eye contact with any one else. Up close, the waiter’s face appears to have an expression of horror or pain. And then there is a chilling revelation: each of us is completely alone in the world.

The slickness of the paint, which makes the canvas read almost like an advertisement, and immediate accessibility of the subject matter draws the viewer into Hopper’s painting. But he does not tell us a story. Rather than a narrative about men and women out for a festive night on the town, we are invited to ask questions about the characters’ ambiguous lives. Are the man and woman a couple? Where are they coming from? Where are they going? Who is the man with his back to us? How did he end up in the diner? What is the waiter’s life like? What is causing his distress?

By setting the scene on one of New York City’s oblique corners and surrounding the diner with glass, Hopper was able to exploit stark pictorial devices. First, the fluorescent light flooding the diner is the only light that illuminates the painting; in the absence of a streetlamp, it spills into the night through both windows onto both sides of the street corner. It throws a series of cast shadows onto the sidewalk and apartment buildings, but ultimately draws our attention back to the men and woman inside the diner. The angle also allows him to show the people in a mix of frontal and profile views, heightening the sense that no figure is really communicating with another. 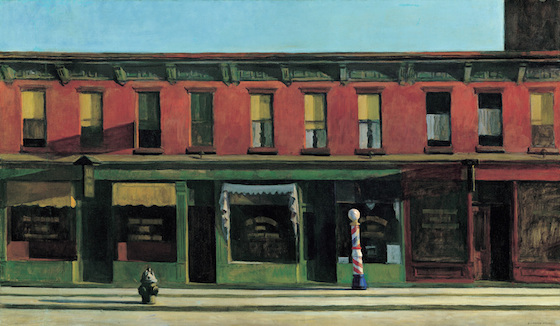 Partially, this is because of the flooding light of dawn. But Early Sunday Morning, with its frilly awnings, brightly colored barber’s pole, squat fire hydrant, and windows opening to meet the morning sun, presents a world that is about to bustle with life. Nighthawks shows the opposite. The windows of the shops and apartments are empty and dark. The only remnants of human activity outside the diner are a cash register in a shop window and a cigar advertisement above the glass pane. There is no clock in the restaurant, but the empty coffee tureens on the back counter betray the indecent hour of night. This is a world shut down. Because our characters are awake, they are alienated—not only from each other, but also from civilization itself.

Nighthawks is one of Hopper’s New York City paintings, and the artist said that it was based on a real café. Many people have tried to find the exact setting of the painting, but have failed. In his wife’s diaries, she wrote that she and Hopper himself both served as models for the people in the painting. Despite these real-life details, the empty composition and flat, abstracting planes of color give the canvas a timeless feel, making it an object onto which one can project one’s own reality. Perhaps this is why it has lent itself to so well to many parodies, even appearing as a motif on an episode of The Simpsons.

When it was completed the canvas was bought almost immediately by the Art Institute of Chicago where it remains, and has been wildly popular ever since. The painting’s modern-day appeal can also be understood because of its ability to evoke a sense of nostalgia for an America of a time gone-by. Despite its inherent universality, the dress of the four people—the woman evoking a pin-up doll, the men in their well-tailored suits and hats, the worker in his soda jerk costume—as well as the “Phillies” advertisement, firmly plant the painting in a simpler past, making it a piece of Americana.

But perhaps Nighthawks’ enduring popularity can be explained because of its subtle critique of the modern world, the world in which we all live. Despite its surface beauty, this world is one measured in cups of coffee, imbued with an overwhelming sense of loneliness, and a deep desire, but ultimate inability, to connect with those around us. 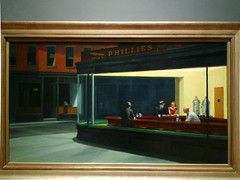 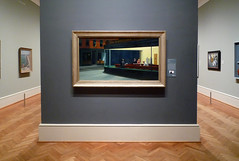 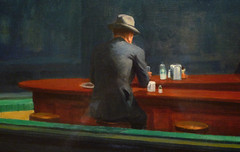 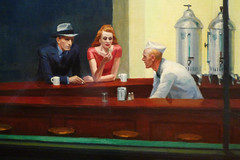