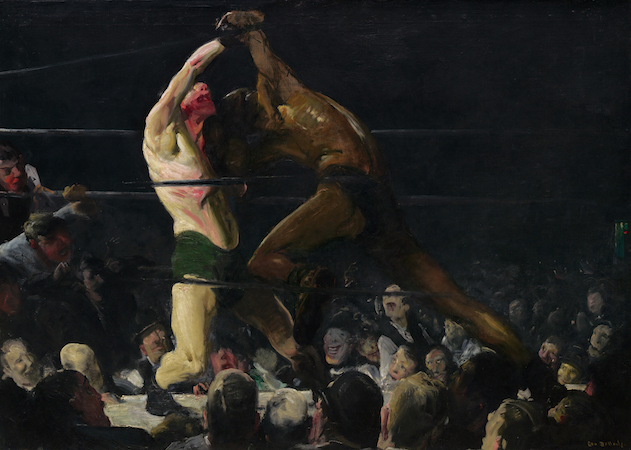 In the early twentieth century, the artist George Bellows aspired to represent the rough edges and dark aspects of New York City. In his early twenties, Bellows moved to the city from Ohio, where he had attended the Ohio State University and played baseball and basketball. He studied with Robert Henri at the New York School of Art and became part of an informal group of American artists that came to be called the “Ashcan School” due to the painters’ gritty brand of realism and the apparent muddiness of their color palettes. Henri, who led the group, encouraged his associates, a number of whom had been illustrators in Philadelphia, to sketch and paint from real life. Typical subjects for Henri, Bellows, and their Ashcan brethren included rough-and-tumble youths, working class people, immigrant communities, and the hubbub of the urban street. While still in his twenties, Bellows painted Both Members of This Club (1909), one of his most recognizable images.

In the painting, two men, one white and the other black, on the left and right respectively, engage one another in a prizefighting (boxing for cash prize) ring. The painting’s style reinforces its subject matter. Bellows’ brushstrokes underscore the violence, physicality and vigorous action of the match. Bellows applied paint with a quickness and sketchiness that echoes the energetic movement of the athletes and the flickering of low light as it bounces across the faces of the rowdy, restless audience. The forms, while distinct, are not delicately rendered, but instead are roughly described. Slashes of paint are particularly noticeable in the highlights along the black boxer’s back and side. They are also apparent in the streaks of red, evoking blood, by the elbow of the white boxer, along his ribs and stomach, and across his neck and chin. 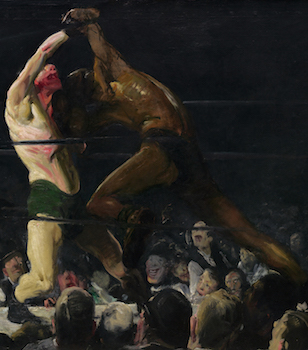 The composition is approximately triangular with the apex marked by the collision of the boxers’ upraised fists. The fighter on the right lunges forward, gaining momentum by pushing off an extended and unnaturally attenuated right leg, into the left fighter, whose right knee seems ready to buckle beneath him. Several layers of the crowd define the base of this compositional triangle.

Bellows mostly limited the colors in this painting to shades of blue-gray, brown, and cream, but accentuated this tonal palette with touches of white, red, orange, and pink, plus the green of the left boxer’s trunks. Bellows illuminated the composition to spotlight the action, thus associating the ring with a theater stage. The obscure darkness of the background largely precludes any perception of recession into space, and also creates the feeling of a dangerous and secretive atmosphere. Indeed, the title Both Members of This Club refers to the dubious practice of turning boxers into temporary sports club members in order to skirt a New York state law that prohibited public prizefighting. For a time, Bellows lived across the street from Sharkey Athletic Club (one institution that took part in this subterfuge), where he could readily observe men fighting.

Bellows keyed in to the racial dynamics of his era by pitting a black fighter against a white fighter. He showed Both Members of This Club at the Exhibition of Independent Artists in 1910, the year of a much-anticipated fight between heavyweight boxing champion Jack Johnson and his challenger Jim Jeffries. The media billed Jeffries as the latest in a series of “great white hopes” who aspired to take the coveted heavyweight title away from Johnson, the African-American man who had held it since 1908. Racial animosity dramatized coverage of the fight, a contest in which Johnson ultimately proved victorious. Though the matchup in Both Members of This Club cannot be definitively assigned to any particular boxing bout, race is thematically and compositionally central in Bellows’ scene.  The painting’s title registers as darkly satirical when we realize that, during this period of segregation, fighting—especially illicit prizefighting at a place such as Sharkey’s—was one of the few forums in which membership could be conferred equally and close interracial interaction condoned.1

The crowd and the city

Bellows’ painting also reflects a contemporary interest in crowd psychology (the study of how individuals behave differently as part of a crowd as well as the behavior of the crowd itself). Bellows famously claimed that “the atmosphere around the fighters is a lot more immoral than the fighters themselves.” In Both Members of This Club, Bellows exaggerated the faces of the onlookers. They grimace, shout, and stare bug-eyed at the drama before and above them. Particularly startling is the toothy grin of a spectator with a long face who can be spotted just to the right of the black boxer’s foreshortened left foot. Bellows’ incisive depiction of the match’s audience reveals the influence of nineteenth-century French artist and caricaturist Honoré Daumier, but it also points to societal concerns of Bellows’ day. 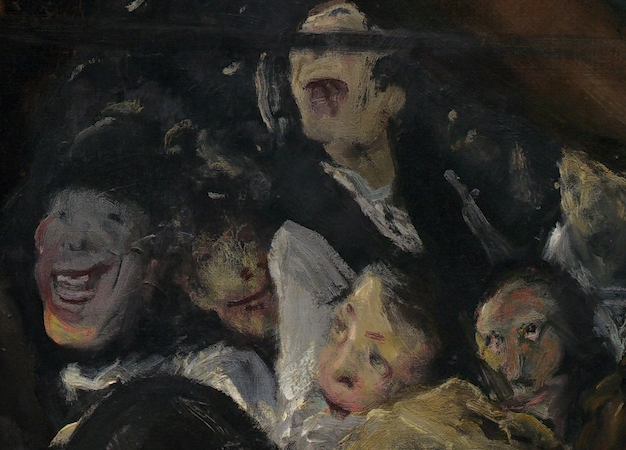 Bellows painted this canvas in 1909, the year after the publication of what are often considered the first two social psychology textbooks. The books’ authors, sociologist Edward Alsworth Ross and psychologist William McDougall, both explored crowd psychology. Ross wrote about the dissolution of individual identity within a crowd, and the crowd’s increased susceptibility to waves of emotion over logical reasoning. Similarly, McDougall theorized that being part of a crowd was a definitive condition of human recreation, stemming from what he referred to as the “gregarious impulse.” He also argued that this “gregarious impulse” was evidenced by the undeniable appeal of cities, which continued to attract residents (such as Bellows himself) despite the high cost of living, pollution, congestion, and risk for disease.2 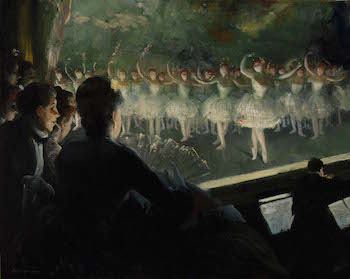 Critics considered Bellows to be distinctly American because he never studied abroad in Europe, as so many other American artists at the time did. Yet Bellows’ work was not insular. His boxing pictures relate to images that fellow Ashcan artist Everett Shinn created of the theater. Shinn was in turn deeply influenced by the work of French Realist and Impressionist Edgar Degas. However, comparison with Shinn and Degas highlights what distinguishes Both Members of This Club. Rather than depicting the polite urban recreation of theater attendance, as in Shinn’s The White Ballet from 1904, Bellows blatantly exposed the city’s dingy and nearly illegal underside, featuring an all-male space where brutality and head-to-head conflict replaced the glamour and coordination of ballet performance.

Part of the crowd? 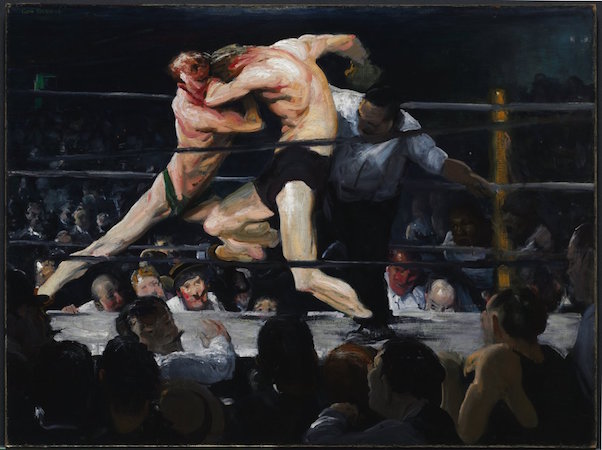 Both Members of this Club is one of three boxing paintings Bellows made in the first decade of the twentieth century.  As in the other two, Club Night (1907) and Stag at Sharkey’s (1909), Both Members of This Club places its viewers in an ambivalent position. We are implicated as part of the bloodthirsty crowd directly behind the heads of the front row spectators, while simultaneously separated from this crowd as visitors in the hushed and refined space of an art gallery.

Cite this page as: Abby R. Eron, "George Bellows, Both Members of This Club," in Smarthistory, August 9, 2015, accessed February 8, 2023, https://smarthistory.org/bellows-both-members-of-this-club/.