John Vanderlyn, Ariadne Asleep on the Island of Naxos 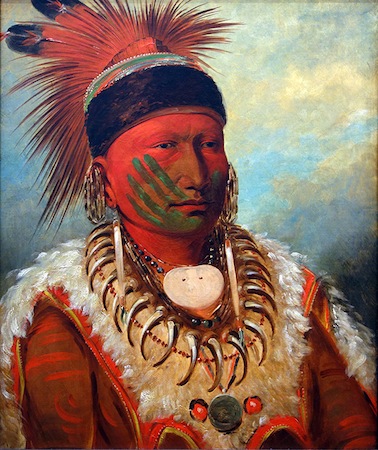 Robed in his most splendid costume, his face gleaming with precious vermillion paint, he sits, like the prince he is, among his proud acolytes, solemnly smoking his pipe. [He is] a modern Jason.¹

This is what the nineteenth century French novelist and critic George Sand said when she first saw this striking portrait of the head chief of the Iowas, The White Cloud, or “Mew-hu-she-kaw,” painted by the American artist, explorer, and ethnographer, George Catlin. This painting, along with a series of other portraits of American Indians by Catlin, was exhibited in the Paris Salon of 1846 (the Salon was the official exhibition of the Academy of Fine Arts in France). They stunned and titillated bourgeois Parisians with the spectacle and strangeness of the vast American wilderness and its “noble savages.” 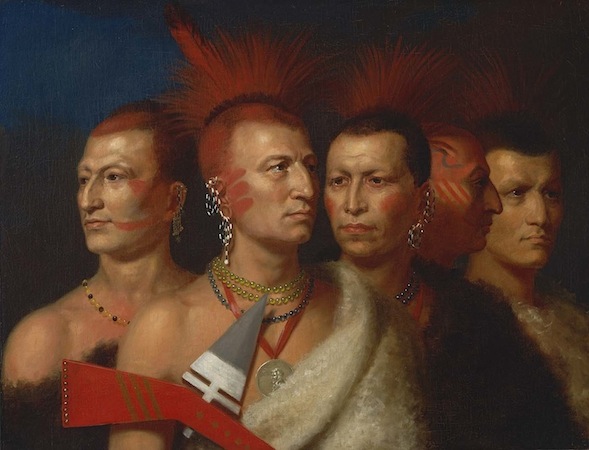 The comparison to the Greek mythological seafarer Jason is not unusual; the tendency to link the diminishing American Indian population to a vanished race of classical heroes was popular among Europeans and Americans in the nineteenth century. In 1821 the American artist Charles Bird King caused a sensation when he painted a group of Plains Indian chiefs in profile as dignified and as stately as Roman statues.

But rhapsodizing over the Indian’s innate nobility was easy to do in the face of his near extinction. By the mid-nineteenth century the popular image of the terrifying Indian who threatened Western expansion and Manifest Destiny (the widely held belief in the United States that American settlers were destined to expand throughout the continent) gave way to a more dignified, but defeated figure as the numbers of Indians across the country fell due to diseases, forced relocation, and poverty. By 1750, the American Indian population east of the Mississippi River fell by approximately 250,000 while the Caucasian and African-American population rose from around 250,000 in 1700 to nearly 1.25 million by 1750.²

Catlin painted this portrait of The White Cloud around 1844, twenty years after the Iowa tribes were forced by the U.S. government to move from Iowa to small reservations in Kansas and Nebraska. The displacement from their ancestral and spiritual homeland left the dwindling Iowa people in a fragile state. Only thirteen years before Catlin’s painting, American Indians endured one of their most traumatic collective experiences, “The Trail of Tears.” As part of the Indian Removal Act of 1830, the government forced many of the southeastern tribes, the Cherokee, Seminole, Choctaw, and Chickasaw, to leave their homes and move west to designated Indian Territory in present-day Oklahoma. Hundreds of thousands died along the grueling journey from disease, exposure, and starvation.

Catlin met The White Cloud, not in the U.S., but in Victorian London, when the Indian chief and his family were touring Europe as part of P.T. Barnum’s traveling circus from 1843 to 1845. The dancing Indians were a featured act in Barnum’s “Greatest Show on Earth” which showcased what Barnum believed to be rare cultural curiosities from all over the world. 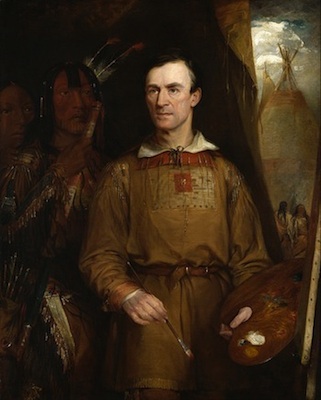 By 1844, George Catlin was already something of a celebrity in America and in Europe with his Indian portraits. Catlin exaggerated his rustic backwoods character by occasionally wearing fur and moccasins to entrance his eager European audience who were hungry for an undiluted taste of the American wilderness (Catlin had grown up in Wilkes-Barre, Pennsylvania).

The exotic plumage of traditional Indian dress appealed to Catlin at a fundamental level. It connected him to another culture and to the roots of American identity and the land.

In his journals he describes their beauty in detail:

However, Catlin’s portrayal of The White Cloud, in his resplendent warrior regalia, stands in sharp contrast to the squalid way in which Barnum treated him. Indian performers during the nineteenth century, whether they were with Buffalo Bill’s “Wild West Show” or P.T. Barnum’s circus, were by and large cruelly exploited. In an 1843 letter to the collector and cultural historian Moses Kimball, founder of the Boston Museum, Barnum writes of the challenges of including Indians in his act while denigrating them:

The Indians arrived and danced [last] night…They dance very well but do not [look] so fine as those last winter. They rowed, or rather paddled, another [race] last Saturday at Camden. I hired them out for the occasion for $100 and their board.

You must either get a [building] near the museum for the Indians to sleep and cook their own victuals [in] or else let them sleep in the museum on their skins & have victuals sent them from Sweeny shop. I boil up ham & potatoes, corn, beef, &c. at home& send them at each meal. The interpreter is a kind of half-breed and a decent chap; he must have common private board. The lazy devils want to be lying down nearly all the time, and as it looks so bad for them to be lying about the Museum, I have them stretched out in the workshop all day, some of them occasionally strolling about the Museum. D—n Indians anyhow. They are a lazy, shiftless set of brutes—though they will draw [in a crowd].

Barnum’s view of the Indians in his employ is the opposite of Catlin’s portrayal of The White Cloud, which brings out this man’s inherent grace and dignity. 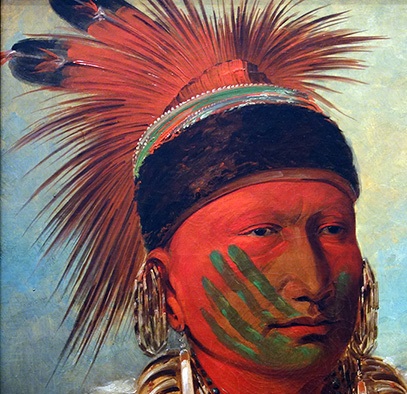 The White Cloud wears the traditional costume of the Iowa chieftain, indicative of his strengths as a warrior and hunter.

His face is painted in glowing vermillion with a green a handprint across his cheeks, a sign that he was skilled in hand-to-hand combat.  He wears a headdress of two eagle feathers and deer’s tail (also dyed vermillion) and a black band across his forehead made of otter fur.  His earrings are made of carved conch shells.  White wolf skin covers his shoulders over his deerskin robe and he wears a necklace made of grizzly bear claws, which testifies to his superior skill as a hunter. 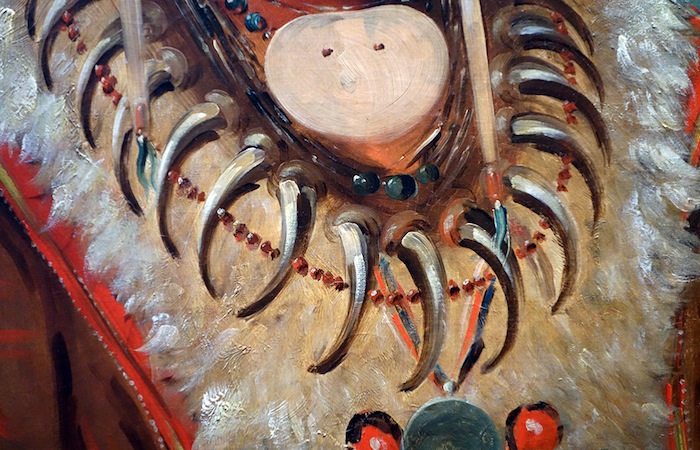 The necklace is the costume’s pièce de résistance, the aspect that signifies that The White Cloud is indeed the chief of his tribe. Catlin added the hazy blue sky in the background from his own imagination—the portrait was actually painted indoors in a draughty studio in London.

Catlin’s portrayal of Indian chiefs galvanized the imagination of a generation of European writers such as George Sand, Charles Baudelaire, and J.M. Barrie, whose Indians in Peter Pan are derived in part from Catlin’s portraits. Yet underneath the images of plumed warriors and braves there was a sense of underlying sadness and determination to document a vanishing way of life. “We travel to see the perishable and the perishing,” Catlin wrote in his journal in the 1830s. “To see them before they fall.”5

It is difficult to look at Catlin’s The White Cloud today without overlaying our knowledge of the oppression and violence Indian peoples suffered over hundreds of years. Nevertheless, it’s important to remember that during Catlin’s time, painting was an important means that Europeans used to record and preserve the changing status of Native Americans. The cultural historian Richard Slotkin said, “Catlin tried to deal with the ephemeral quality of the wilderness—the fact that white men were destroying it as they were trying to appropriate it.”6  The Indian, to Catlin, represented a beautiful, primordial aspect of America endangered in the face of industrialization and westward expansion.

George Catlin’s paintings of the American Indians remain an enduring window onto the Old West, one of the most fascinating and contentious periods of American history. In certain aspects the art of the Old West shows us what the art historian Bryan J. Wolf calls, “the eternal last act in an imperial drama that began, as it ended, not just with territorial expansion but with cultural conquest as well.”7 Catlin’s paintings and illustrations, free of sanctimony or fabrication, show us the Indian not as a noble savage, as the European audiences often saw him, or as a demonic figure in the view of many nineteenth-century settlers, but as a real person in a real, though exotic, setting.

Biography of the artist from the Smithsonian American Art Museum

An Eye for Art: Focusing on Great Artists and Their Work. National Gallery of Art, (Chicago Review Press: 2013), p. 40 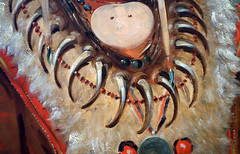 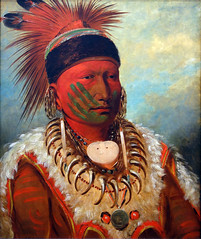